Rick and Morty “Wormageddon” Location 8 Reveal: Nimbus With The Win! 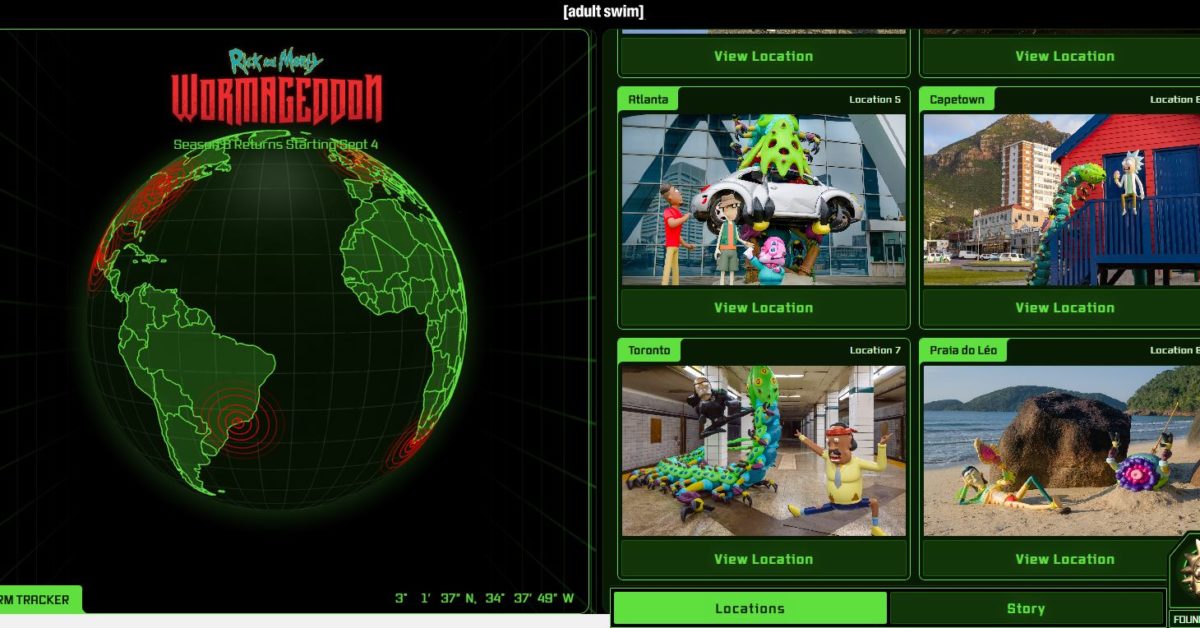 Okay, this time, it might’ve taken two clues to get the job done. But Dan Harmon & Justin Roiland‘s Rick and Morty “Wormageddon” (rules, details, etc., are here) can now add a new location to the list of global battlefront locations that also includes Mexico City, Malibu, California; The Netherlands, Pittsburgh, Pennsylvania; Atlanta, Cape Town, and Toronto. So where was it that Mr. Nimbus was working his magic to help save the world? Here’s a look at where in the world “Team Sanchez” is on the defense once again, followed by a video overview of what’s been going down.

At 23.3715° S, 44.9503° W, we’re finding ourselves at Praia do Léo in Brazil, where The King of the Ocean lies erect with the satisfaction of a job well done at our eighth global battlefront location:

Located at 34.1087° S, 18.4702° E, we find Tiny Rick enjoying some ice cream at our sixth location, the Muizenberg Beach Huts in Cape Town for our sixth battlefront location- take a look:

At 33.7573° N, 84.3963° W, we find ourselves at the fifth location: State Farm Arena, where Jake from State Farm(?!?), Glootie, and the Smiths’ neighbor Gene (who might also be interested in starting up a new app… or maybe that was his car and that’s why Jake’s there? Aside from the arena?) take on a big bad in Atlanta, Georgia:

At 40.4536° N, 80.017°W, we headed to our fourth battlefront location: 1100 Galveston Ave in Pittsburgh, Pennsylvania, to Mr. Poopybutthole’s apartment, where he’s going one-on-one with one particularly nasty worm:

Checking in with 19.34938º N, 99.17101º W, we have Beth and The Vindicators’ Supernova at Casa de Cultura Reyes Heroles, Coyoacán, in Mexico City, fighting the good fight at our first global battlefront. And with the battle for the fate of the world underway, there are 14 total locations to be revealed. Now here’s a look back at how it all began:

Here’s a rundown of the teasers that were released building up to the event that offers some backstory:

Hitting our screens on September 4th, here’s a look at the official trailer for the sixth season of Adult Swim’s Rick and Morty:

Pick up where we left them, worse for wear and down on their luck. Will they manage to bounce back for more adventures? Or will they get swept up in an ocean of piss! Who knows?! Piss! Family! Intrigue! A bunch of dinosaurs! More piss! Another can’t miss season of your favourite show.

Directed by Masaru Matsumoto (Starship Troopers: Traitor of Mars) and stemming from Sola Entertainment, the Halloween-inspired The Great Yokai Battle of Akihabara sees Rick looking to build the ultimate AI toaster until a trip to Akihabara for spare parts takes a twisted turn for our dimension-hopping duo. Think screws. Now here’s a look at The Great Yokai Battle of Akihabara, followed by looks at four previously-released shorts:

Directed by Takashi Sano (Tower of God), produced by Sola Entertainment, and animated at Telecom Animation Film, the anime short Rick and Morty vs. Genocider finds Morty going on an adventure to Tokyo, Japan, to try and help stop “The Genocider.” And yes, it’s beautiful, emotional, and some really weird stuff happens:

Sano returned with the new short (produced by Sola Entertainment and animated by Telecom Animation Film), Summer Meets God (Rick Meets Evil)– following up on his previous short, Rick & Morty vs. Genocider. Here’s a look at the newest short, with a focus on Summer and Jerry that goes in ways we didn’t expect:

Written and directed by Kaichi Sato and produced by Studio DEEN, “Samurai & Shogun” finds Rick WTM72 (Yohei Tadano) and Shogun Morty (Keisuke Chiba) in a Lone Wolf and Cub-themed dimension. A nasty group of Ninja Ricks isn’t willing to let go of Shogun Morty without a fight – an option that Rick WTM72 is more than willing to oblige. From there, we have a look at the follow-up short that was released last month, continuing the story, Samurai and Shogun Part 2:

In the creative spirit of Samurai & Shogun by Kaichi Sato and Rick & Morty vs. Genocider from Takeshi Sano, here’s a look at Rick and Morty in the Eternal Nightmare Machine– where even the “Rick-mobile” can prove deadly, and you’ll wonder like we do why Scary Terry isn’t a downloadable character for a fighting game like Mortal Kombat:

The Privacy Settings You Need To Change After Installing Windows 11

Lemonade leans on Aviva to bring its next-gen insurance…