Review: Even the Commitment of an Original Cast Fails To Save ‘Teen Wolf: The Movie’ From Mediocrity 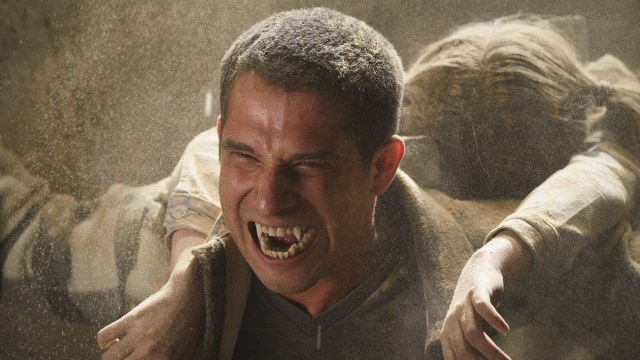 With the imminent arrival of spinoff series Wolf Pack, a feature length version of MTV’s Teen Wolf: The Movie seeks to close out one whilst introducing another on Paramount Plus from on Jan. 26. Whether this is entirely necessary depends upon your perspective since the Jeff Davis (Criminal Minds) creation had already run for six seasons and concluded in 2017.

With an opening salvo that includes overly dramatic rainstorms, emblematic silver bullets placed on polished surfaces, and the release of a malevolent spirit – Teen Wolf gets off to a promising start. With the emergence of other familiar faces including Dylan Sprayberry’s Liam Dunbar, Ian Bohen’s Peter Hale, and Holland Ruben’s Lydia Martin – this slice of MTV nostalgia makes its intentions clear from the outset.

With CW Superman Tyler Hoechlin in full effect as werewolf alpha Derek Hale, Teen Wolf takes full advantage of his star status as the resident Man of Steel to add some much-needed gravitas. Elsewhere, Tyler Posey’s Scott McCall is swiftly re-introduced while memories of a lost love plague his waking hours – until some left-field inspiration takes hold and things progress.

With resurrection on the agenda, Scott feels compelled to bring back ex-girlfriend Allison Argent (Crystal Reed), who died in season three. Following some questionable choices and an ancient ritual by moonlight, Allison returns with some serious anger issues. Unfortunately, this newly revived version has no recollection of Scott other than seeing him as another werewolf to kill. Cue some polished production design, cliched dialogue exchanges, and fan-favorite moments designed to pass the torch to a new generation.

With malevolent spirits seeking retribution for undetermined reasons, while partially transformed werewolves flash fangs and show off their visual effects, Teen Wolf breezes past the two-hour mark. However, with banshees, hell hounds, and kitsune (fox spirits) all playing their part in telling the tale – this expanded episode finale sometimes feels overstuffed.

For those who come to this with no knowledge of the all-important relationships, past transgressions, and ingrained grudges, this might not feel like a big deal. In truth, Davis has done this to appease the fan faithful who felt Teen Wolf ended on a cliffhanger. That it somehow had something else to add, which would effectively offer closure to those who had grown attached to these characters – as so often can happen.

So it is that Teen Wolf: The Movie finds Eli Hale (Vince Mattis) gaining in confidence, finding common ground with his father, and finally maturing under the guidance of Scott McCall. Over the course of this film, Davis sets up Wolf Pack elements, which are woven in amongst Teen Wolf-centric moments whilst maintaining a dramatic balance. The familiar crew experiences epiphanies, pitch battles take place in other realms, and make essential sacrifices for noble causes.

With transparent references to Stranger Things and The Matrix which imbue this movie with genuine cinematic qualities, there are certainly elements to enjoy for non-fans. It is clear that these series regulars slot right back into their roles, ensuring that performances across the board are in line with expectations. However, for anyone familiar with CW shows like Supergirl there will be few surprises, as Teen Wolf applies a similar template that entertains yet rarely challenges its audience.

Highlights amongst the ensemble cast include Hoechlin as Derek Hale, who provides a degree of emotional reality as Derek which detracts from the more convoluted elements. In fact, for many fans comparisons between this role and his turn as Superman are almost unavoidable, since the latter is so intrinsically linked to the actor as a whole.

Elsewhere, Posey and Crystal Reed inhabit their respective roles with equal panache, coloring the relationship between Scott and Allison with enough emotional shades to keep it engaging. That being said, there is a certain degree of narrative cliché which makes Teen Wolf predictable without draining it of entertainment value. A trick which any number of demographic specific shows pull off with ease, especially when it comes to projects created by uber producer Greg Berlanti.

However, what Teen Wolf achieves is exactly what it set out to do, which is act as a launch pad for another show. Whether it succeeded in offering closure to those fans who felt short changed by the conclusion of season six is academic. In a completely calculated way, this feature length stab at the MTV show remains intentionally average and overtly unchallenging – as it never seeks to overshadow the imminent new entry from showrunner Davis.

Review: ‘Teen Wolf’ is a swan song for fans who feel short changed

Tries to appease and entertain in equal measure – fans only need apply.

Jetshen Dohna Lama Wins This Season, She “My Journey Has Been A Great Learning Experience”