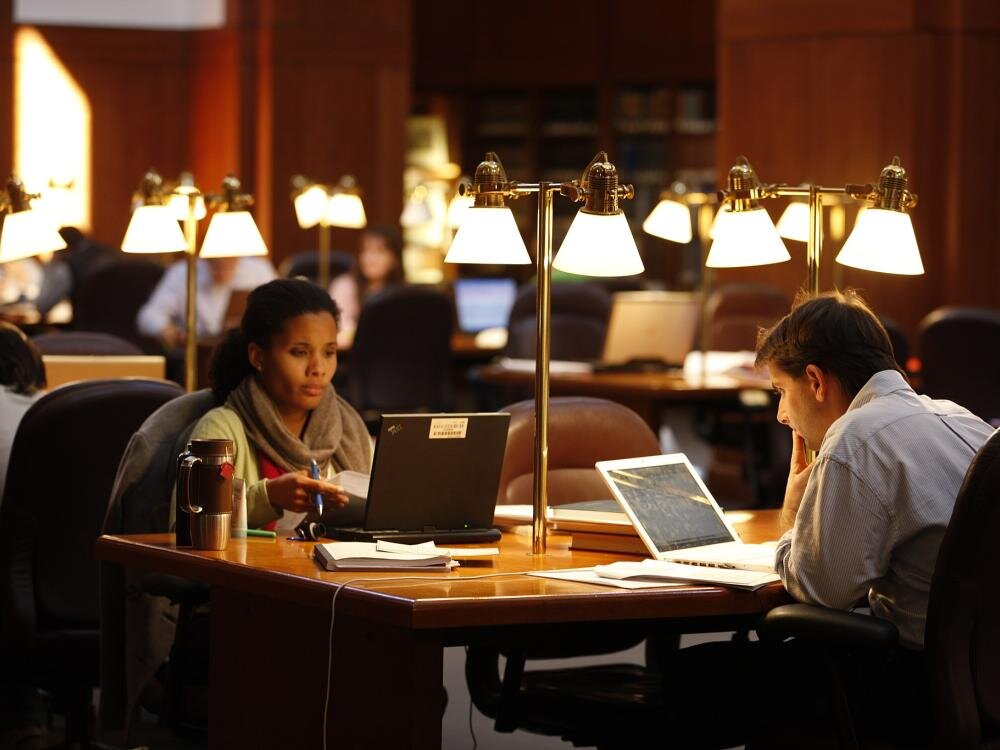 As part of an effort to address racial inequities in the legal field, law schools in the United States are increasingly accepting the Graduate Record Examination (GRE) in place of the Law School Admission Test (LSAT) as part of their admissions requirements. According to College of Education researchers, however, GRE-accepting admissions alone are insufficient for expanding access to law school for racially minoritized students.

“My hope is that this study complicates how we think about admissions reform,” said Kelly Rosinger, associate professor of education (education and public policy). “I think we’re really hoping for a silver bullet and what we’ve forgotten in this is that racial inequities in enrollment patterns are the result of systematic, decades-long policies that are intended to withhold opportunities from Black and brown families and give opportunities to white families.”

The study, “Exploring the Impact of GRE-Accepting Admissions on Law School Diversity and Selectivity,” was published recently in The Review of Higher Education. In the paper, Rosinger and her co-authors valuate the impact of law schools’ decisions to allow applicants to submit the GRE instead of or in addition to the LSAT. The co-authors include Karly Ford, associate professor and research associate of education (higher education); and Junghee Choi, an assistant professor in the Department of Educational Leadership & Policy Studies at the University of Oklahoma, who received a doctorate in higher education from Penn State.

The GRE-accepting trend has been gaining ground in legal education since 2016, when the University of Arizona became the first law school to adopt GRE-accepting admissions in a stated effort to admit students from more diverse backgrounds. By 2020, more than one-quarter of American Bar Association (ABA)-accredited law schools accepted the GRE in place of the LSAT, and the ABA voted in 2021 to allow law schools to accept the GRE. Currently, 57 institutions have adopted the policy, including Harvard, Yale and Columbia, as well as Penn State Law and Dickinson Law.

For Rosinger, studying law school admissions reform is a natural extension of her body of work. Her research examines the barriers students face going to and through college and how postsecondary policies can be designed to reduce racial and economic inequities.

Rosinger has done previous work in this area in an undergraduate context, studying the long-term trend of test-optional policies that started in 1969 among selective liberal arts colleges and picked up steam up in late the 1990s and early 2000s. The movement was initiated to increase access for low-income and racially minoritized applicants because of racial and economic inequities in test scores and because they do not always predict students’ longer-term success beyond other academic measures, Rosinger said. Eventually, the trend moved to research universities and during the COVID-19 pandemic, most universities went test-optional due to constraints in the college admissions testing environment.

“At the same time, we see this movement in graduate schools to go GRE-optional and in law schools, we see an effort to allow institutions to admit students using the GRE instead of the LSAT,” said Rosinger.

Rosinger and her colleagues decided to study the recent shifts in law school admissions, she said, in large part because of the opportunities for social and economic advancement that law schools offer. As a highly selective sector of education, law school “tends to be white-male oriented.”

Existing research on test-optional admissions policies at the undergraduate level has come to mixed conclusions about their effectiveness. A 2015 study co-authored by Rosinger found that liberal arts colleges that adopted test-optional policies didn’t increase racial and economic diversity in the student body. Rather, the policies opened doors to more applicants and the submission of higher test scores, which led to institutions becoming more selective.

Going into the study, the researchers had reason to believe that GRE-accepting admissions may increase enrollment among racially minoritized students. In their article, they cite previous research that has shown disparities in LSAT scores by race, with test-takers identifying as Black or Puerto Rican on average scoring lower than takers identifying as white, Asian or Pacific Islander. Rosinger said that LSAT introduces racial bias into the admissions process in the sense that its costly and only offered a few times a year. The GRE, while carrying some of the same inherent biases as the LSAT, is offered more often and at a lower cost.

To understand how GRE-accepting policies impact law school selectivity and diversity, the researchers used data from the ABA, which collects annual information on law school admissions, enrollment and financial aid practices. Their sample included 201 ABA-approved law schools, while their dataset contained a decade of data from the 2011–12 to the 2020–21 academic years.

Rosinger and colleagues’ study on law school admissions reform yielded similar results as the previous studies on test-optional admissions. Due to the greater volume of applications, law schools were able to become more selective without further diversifying the student body. In fact, the researchers found that GRE-accepting policies may decrease racial diversity after being in place a couple of years and those changes are sustained over time.

According to Rosinger, the results of the researchers’ study do not negate the potential benefits of law schools adopting GRE-accepting policies. Rather, they point to the need for more systemic, comprehensive reforms in recruitment, admissions, financial aid and the campus environment that produce inequitable outcomes.

Additionally, Rosinger said, to truly level the playing field in the legal profession, administrators should promote policies that elevate students from underrepresented groups while they are enrolled in law school. Racialized barriers can be overcome by providing adequate financial aid to minoritized students, developing curricula that centers social justice, and helping students gain career-enhancing experiences, as examples.

“The solution here is not to go back to the LSAT: that wasn’t working,” said Rosinger. “We’ve taken one step, and we’ve tried to remove one barrier, but we haven’t taken the next step and the next step.”

Jeff Bezos plans to give away the majority of his fortune