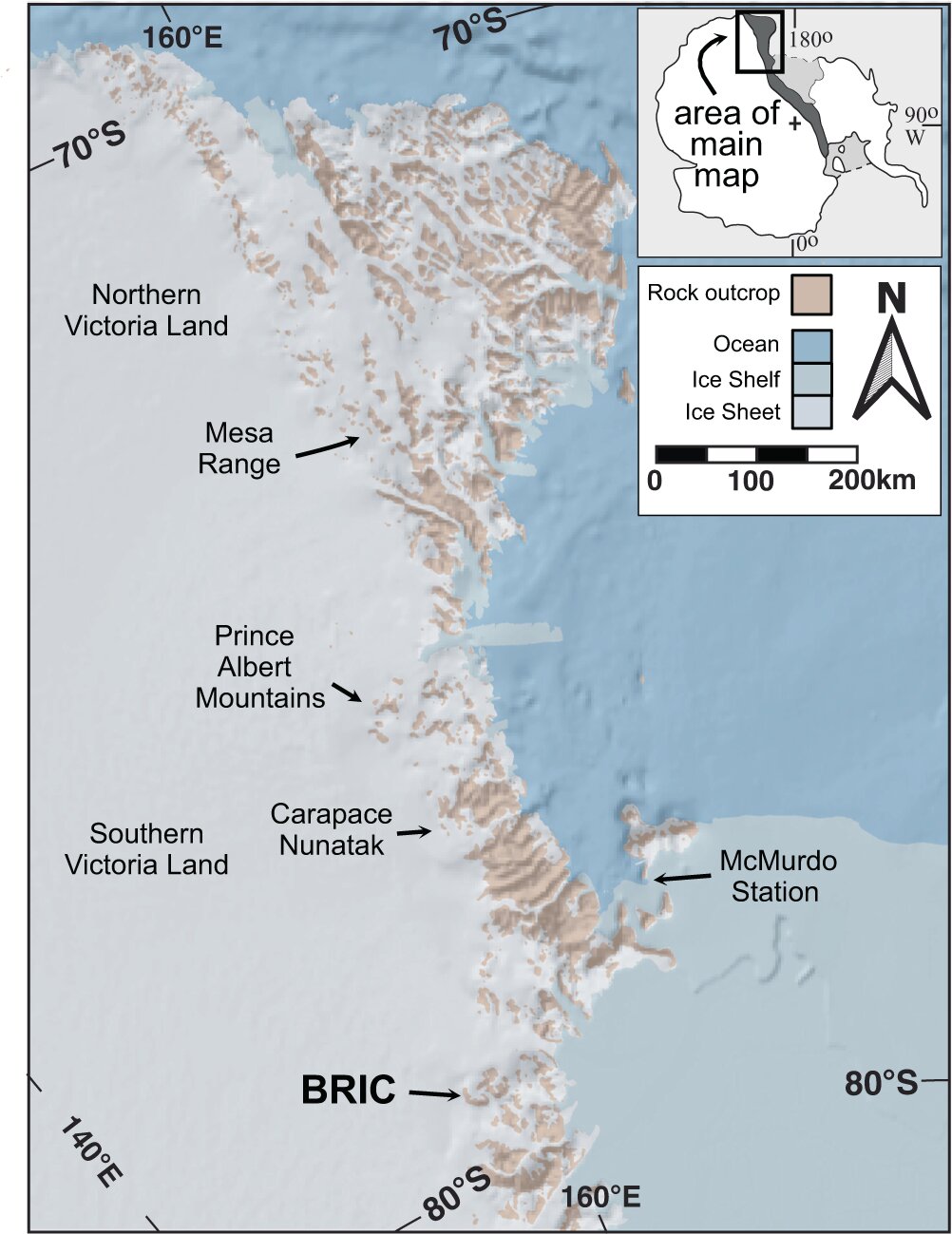 Let’s pretend it’s the Late Cretaceous, roughly 66 to 100 million years ago. We’ve got dinosaurs roaming the land and odd-looking early species of birds, although the shark as we know it is already swimming in the prehistoric oceans—which cover 82% of Earth. Redwood trees and other conifers are making their debut, as are roses and flowering plants, and with them come bees, termites and ants. Most of all, it’s warm, volcanically active and humid all over the place with nary an ice sheet in sight.

Except, according to a group of scientists from UC Santa Barbara, University of Oregon and University of Manitoba, icy conditions did exist in the region of the South Pole.

“And it wasn’t just a single-valley glacier,” said UCSB geologist John Cottle, “it was probably multiple glaciers or a large ice sheet.” Contrary to our widely held picture of the Late Cretaceous as “hot everywhere,” he said, there’s evidence that polar ice existed during that period, even at the height of global greenhouse conditions. The geologists’ study is published in the journal Nature Communications.

“I actually heard about these rocks when I was a grad student 20 or so years ago, and they’re just really weird,” Cottle said. Remote, even by today’s Antarctic exploration standards, the BRIC is unusual because the rocks’ composition and formation are uncharacteristic of nearby rock formations, with—among other things—large amounts of glass and layered alteration that indicates significant physical, chemical or environmental events that changed their mineral composition.

Cottle got the chance to finally sample the BRIC on a recent expedition, and in the process of analyzing how it was formed, he and his team encountered an “unusually large amount of water.”

“So you have a really hot rock that interacts with water, and as it cools, incorporates it into the glass,” he said. “If you look at the composition, then you can tell something about where that water came from. It can exist as hydroxyl, which tells you that it probably came from the magma, or it could be molecular, which means it is probably external.”

What they were expecting to see was that the alteration in the rock was caused by the water already in the magma as it cooled. What they found instead was a record of a climate process that was thought not to have existed at the time.

In their spectroscopic analysis of the samples, the researchers determined that while some of the water indeed originated with magma as it plumed upward from Earth’s interior, as the molten rock cooled into glass just beneath the Earth’s surface, it also incorporated groundwater.

To lock in their result, Cottle and team also conducted argon-argon geochronology to date the rock and its alteration.

There are other, similar volcanic rocks roughly 700 km north of the BRIC that also have a Cretaceous alteration age, indicating that polar glaciation might have been regionally extensive in Antarctica during that time. “What we’d like to do is go to other places in Antarctica and see if we can determine the scale of the glaciation, if we recover the same results that we’ve already found,” he said.

Finding evidence of large ice sheets dating back to the Cretaceous might not alter our general picture of a hot and humid Earth at that time, Cottle said, “but we would have to think about the Cretaceous and Antarctica quite differently than we do now.”

The iPhone 14 Plus Takes An Easy Route To Success: First Look

iPhone 14 vs iPhone 14 Plus: key differences

Disney, ESPN, and others dropped from Dish and Sling TV due…