Remembrance Day 2022: Ontarians gather at ceremonies across the province 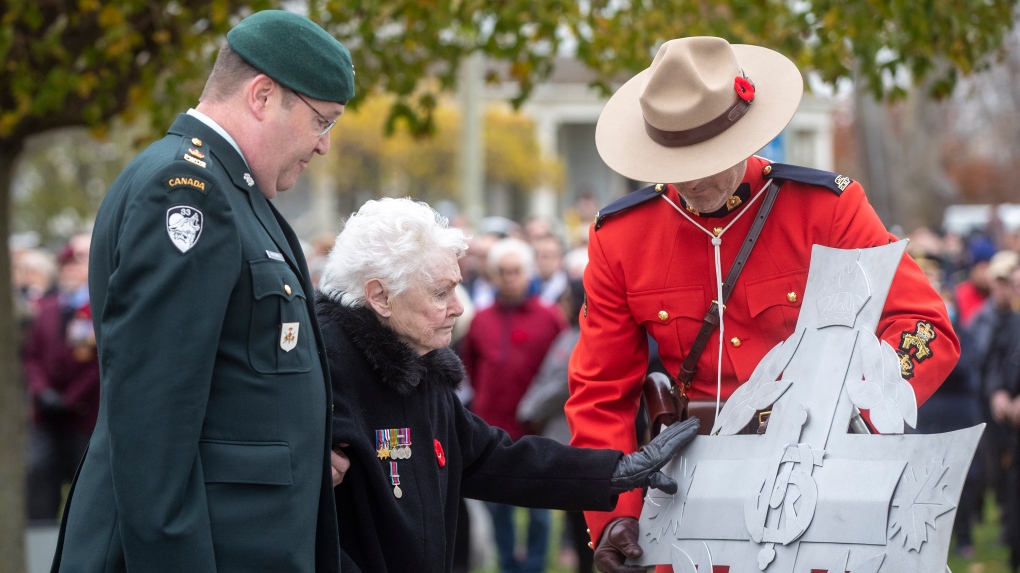 Crowds gathered under grey skies and occasional rain at ceremonies across Ontario on Friday to pay their respects to those who died fighting for Canada, with many noting the importance of those efforts at a time when freedom and democracy are under threat abroad.

On the grounds of Ontario’s legislature, Premier Doug Ford spoke about the conflict in Ukraine while highlighting the sacrifices of service members past and present.

“The illegal invasion being waged by Russia on the people of Ukraine shows us all the dangers that still exist in this world,” said Ford, who spoke as cannons periodically fired in the distance as part of a 21-gun salute.

“As we stand here, brave Canadian service people are deployed across the globe, providing vital supports to our friends and allies.”

At a separate ceremony in downtown Toronto, Mayor John Tory also referenced conflicts overseas when paying tribute to those who served.

“Together, we honour the many who gave their lives in service to our country to protect the peace and freedoms that we enjoy today and which are increasingly under threat elsewhere in the world,” he said.

Tory noted that the city has lost nearly 10,000 Torontonians to war, peacekeeping operations and other missions around the world.

“We must not let the years fade our recollections of the bravery and the humanity of our veterans,” he told the crowd that packed the area around a cenotaph at Old City Hall.

Veteran John Dufort, 72, said it was “wonderful” to see so many people at Toronto’s Remembrance Day ceremony, noting he hadn’t seen crowds of such size since pre-pandemic times.

Dufort, who said he is the only member of his family to have served in the military, expressed a desire for the public to maintain the act of remembrance in the future.

Ethel Quesnel touches the memorial cross for her husband Lucien, who served during the Second World War, during the Remembrance Day ceremony in Kingston, Ont., Friday, Nov. 11, 2022. THE CANADIAN PRESS/Lars Hagberg

“As you can see here today, the veterans that were here are dwindling every year,” he said. “It’s very important to pass this along to the youth to bring it on forward for the act of remembrance.”

Marilyn Lawson-Dickinson, a retired cadet with the Royal Canadian Air Cadets, also took note of the crowd, saying it was “phenomenal” to see so many people coming together to pause in an act of remembrance.

Lawson-Dickinson, 61, said she signed up for the air cadets when women were allowed to join, and also recalled her family’s long history of service starting with her grandfather in the First World War and uncles in the Second World War.

“They stood up for Canada,” she said, adding that her husband also served in the military for eight years. “Canada goes to help people, and that’s going to continue, and we just have to remember that.”

Alistair Stark, 73, was also among the veterans in attendance and recalled the service of his relatives.

“(My father) landed at D-Day, I’m very proud of him,” said Stark. “My uncle served in Italy for the Black Watch (of the Royal Highland Regiment) and he was killed just outside Monte Cassino.”

Stark said he served in the military reserves for 16 years as part of the 48th Highlanders.

Jo Ann Tuskin, who attended the ceremony at the Ontario legislature, said she wanted to show her gratitude for those who had served, including members of her own family.

“Thank you,” she said, “for all the service of all the men and women all these years to make Canada the great country it is.”

This report by The Canadian Press was first published Nov.11, 2022.