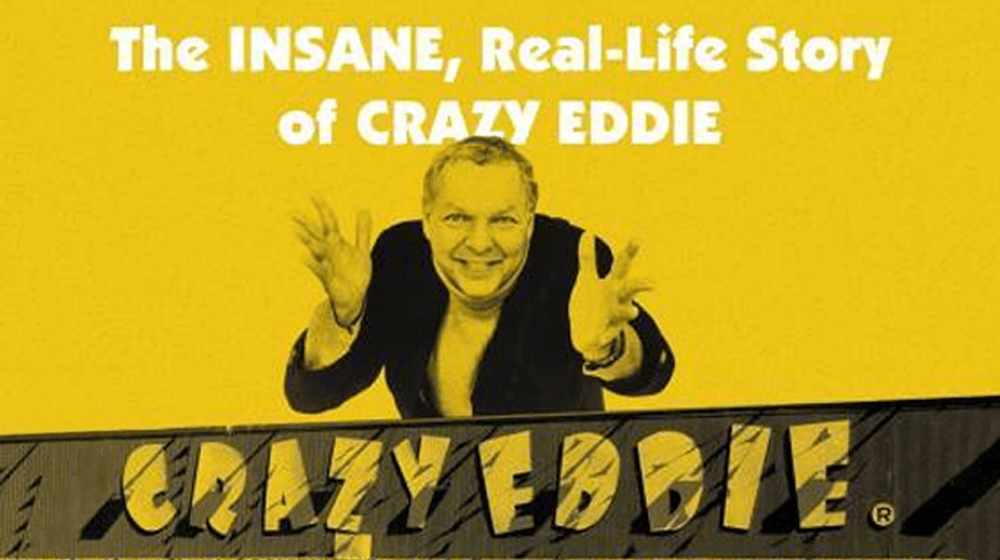 When I was growing up in Connecticut in the 1970s, there was a commercial I repeatedly heard on TV over and over again; it was about a company in New York based consumer electronics store named “Crazy Eddies” whose prices the commercial said, “were insane”. If you never saw the commercial, it has a former DJ named Jerry Carroll, often mistaken for Eddie, talking quickly, and gesticulating wildly in a variety of costumes or just a gray turtleneck with a dark blazer. He would give a sales pitch ending with the tag line of assurance: “His prices are insane!” Unbelievable, over 7,500 commercials were made.

A lot of people hated those commercials and parodied them. Dan Aykroyd did a “Crazy Eddie” spoof on “Saturday Night Live.”  I am not sure I ever visited he store, but the commercial still sticks with me to this day. From a business point of view, I always wondered who Crazy Eddie was and what happened to his company.

On The Small Business Radio Show this week, I talk to Gary Weiss who is the author of a new book called “Retail Gangster: The Insane Real Life story of Crazy Eddie”. The source for the information in the book was a member of Antar’s own family! He has been uncovering Wall Street wrongdoing for nearly two decades.

We discussed that Eddie Antar came from a Syrian family who had always been merchants before they came to the United States in the 1920s. He built “Crazy Eddie’s” into a publicly traded $300 million company with many franchise locations. The famous commercials were all produced in house and were not a creation of an outside ad agency. Gary believes they are based on the old idea of the “crazy merchant who is so nuts, he sells below wholesale.”

Gary describes Eddie’s effort to build his company and achieve the American Dream with tactics that were “aggressive to criminal; he ripped off everyone in sight”. To undercut competitors like Circuit City and The Wiz, he “was instructing employees to clean off display models or returned goods and rebox them as brand-new. Eddie routinely did not pay sales tax to the government even though he collected it from customers. Warranty claims were fabricated.” Gary describes that when auditors showed up, “female employees were instructed to cozy up to them”.

According to Gary, this led to “Antar’s edge which was built on wide scale stock fraud, manipulating cash, the company’s earnings, tax or insurance fraud. The crimes were discovered when “Crazy Eddies” was bought after they went public. A family member, Sam Antar eventually was the whistleblower on the company.

When he was finally charged with crimes, Eddie fled to Israel by invoking that country’s Law of Return and falsifying his family’s passports. Once he was extradited, Antar served almost seven years in U.S. federal prison and but many of his crimes were never prosecuted.

As a marketing genius, Gary wonders if he could have been a success, without being a criminal.