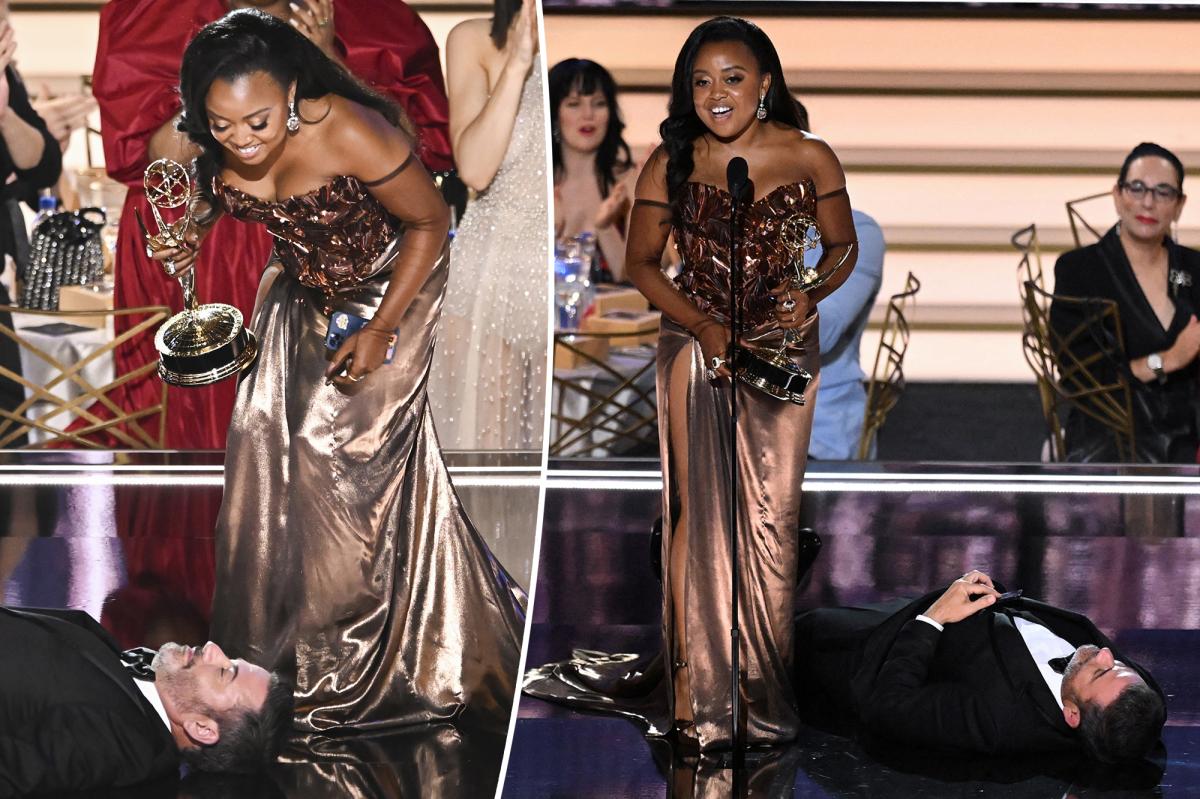 Jimmy Kimmel may have found himself under fire for his controversial joke during Quinta Brunson’s Emmys 2022 speech — but the “Abbott Elementary” star isn’t letting his antics “bother” her.

The actress, 32, poked fun at the “Jimmy Kimmel Live!” host’s decision to lie beside the mic as she accepted her award for Outstanding Writing in a Comedy Series on Monday.

“Tomorrow maybe I’ll be mad at him,” she joked to members of the press backstage. “I’m going to be on his show on Wednesday, so I might punch him in the face. I don’t know what happens.”

Brunson went on to call Kimmel, 54, “one of the comedy godfathers,” adding that she was “really happy” that he presented her award.

“Jimmy gave me my first big late-night spot and was one of the first people to see ‘Abbott,’” she explained. “He Instagram messaged me that he saw this comedy and thought it was one of the greatest comedies of all time.”

Kimmel also addressed the backlash, continuing to stand by the narrative that he passed out drunk after losing an Emmy Award to John Oliver and had to be dragged onstage by Will Arnett.

“I had my eyes closed, I had no idea where I was,” the talk show host jokingly told Entertainment Tonight. “It was one of the weirdest things that’s ever happened to me.”

While some social media users saw the humor in Kimmel’s bit, many found fault with the “disrespectful” move.

“I don’t know of a better example of invasive white male privilege than Jimmy Kimmel laying in the middle of Quinta Brunson’s #Emmys2022 speech. He had no business/right to take up space in the way that he did,” one Twitter user wrote.

Another noted, “I’m tired of Black women having to exert grace, maneuver around roadblocks, and share their spotlight for no reason.”

Others were upset that Brunson was forced to to shorten her speech amid play-off music.

“We can get Will Arnett dragging Jimmy Kimmel on stage for 10 minutes but can’t let Quinta Brunson thank her husband?” one fan tweeted.

Brunson was nominated for two other Emmys, making history as the first Black woman to be nominated three times in the comedy category.

Denial of responsibility! My droll is an automatic aggregator of the all world’s media. In each content, the hyperlink to the primary source is specified. All trademarks belong to their rightful owners, all materials to their authors. If you are the owner of the content and do not want us to publish your materials, please contact us by email – [email protected]. The content will be deleted within 24 hours.
awards season 2022emmysemmys 2022Jimmy Kimmel
0
Share

Silvestre de Sousa upbeat despite suspension, as he looks to entrench himself for the long term | HK Racing