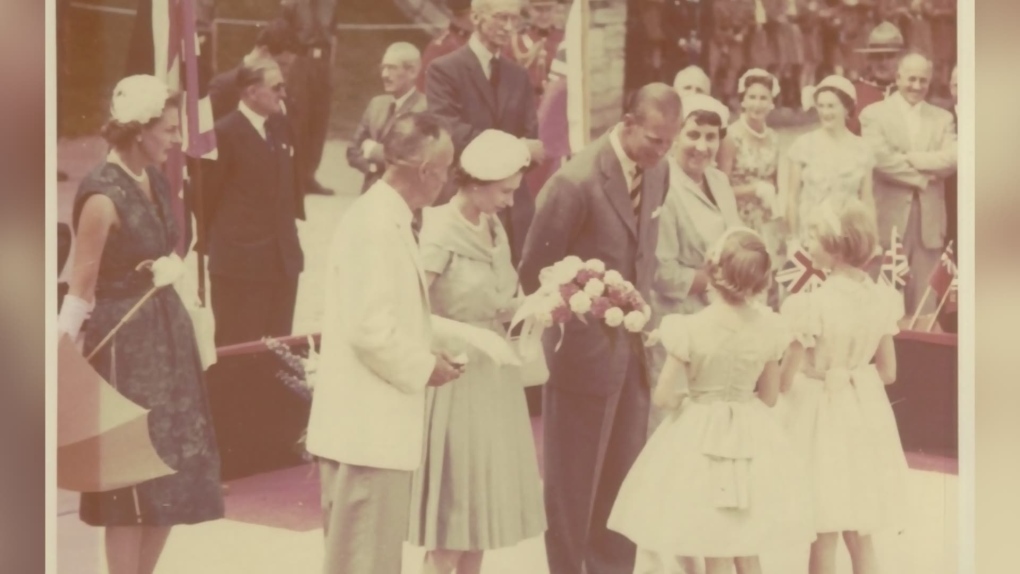 At Little Lake Park in Midland, not much has changed over the years, and while the stairs may have seen better days, more than 60 years ago, they set the royal stage for a historical event.

On July 4, 1959, Queen Elizabeth II and Prince Philip made the stop as part of a trip to Simcoe County.

“Thousands of civilians lined the streets, the harbours and Little Lake Park to greet them and cheer them on,” said Huronia Museum curator Genevieve Carter.

The visit is documented in the archives at the museum, where one picture shows two little girls presenting Her Majesty with flowers.

Catherine McLaughlin was one of those girls, and the dress she wore that day, made by Fabulous Formals in Midland, is also part of the museum’s collection, donated in 2014.

“It was the fanciest dress I ever wore, maybe the most uncomfortable,” laughed McLaughlin. “It was by great chance that Catherine Brandon and I were selected. Princess Anne was nine, so whoever with the town decided they would select nine-year-old girls.”

McLaughlin said she was chosen from the local Catholic school while Brandon attended public school. Both were chosen because they had the highest marks.

McLaughlin calls meeting the Queen both an honour and a privilege.

“(The Queen) was very quiet,” McLaughlin said. “Somehow, I just took it in strides and probably my parents were more anxious.”

It’s an experience McLaughlin said connected her to the royal family and the community. Something she reflects on now more than ever.

“Now that she’s passed, I’m thinking she was and still is a great unifier because people are sharing their stories,” McLaughlin said.

The museum said attempts had been made to track down the other girl pictured with the Queen.

“It would be interesting to talk to her as well,” Carter said.

Since the Queen’s passing, the museum has received several photos of the Royal visit.

A book of condolences is now on display at town hall for anyone who wishes to share memories and pay tribute.

Reviews Featuring ‘Temtem’, Plus ‘Life is Strange’ and…

ICICI Bank hikes key lending rates by 15 bps: How would your…