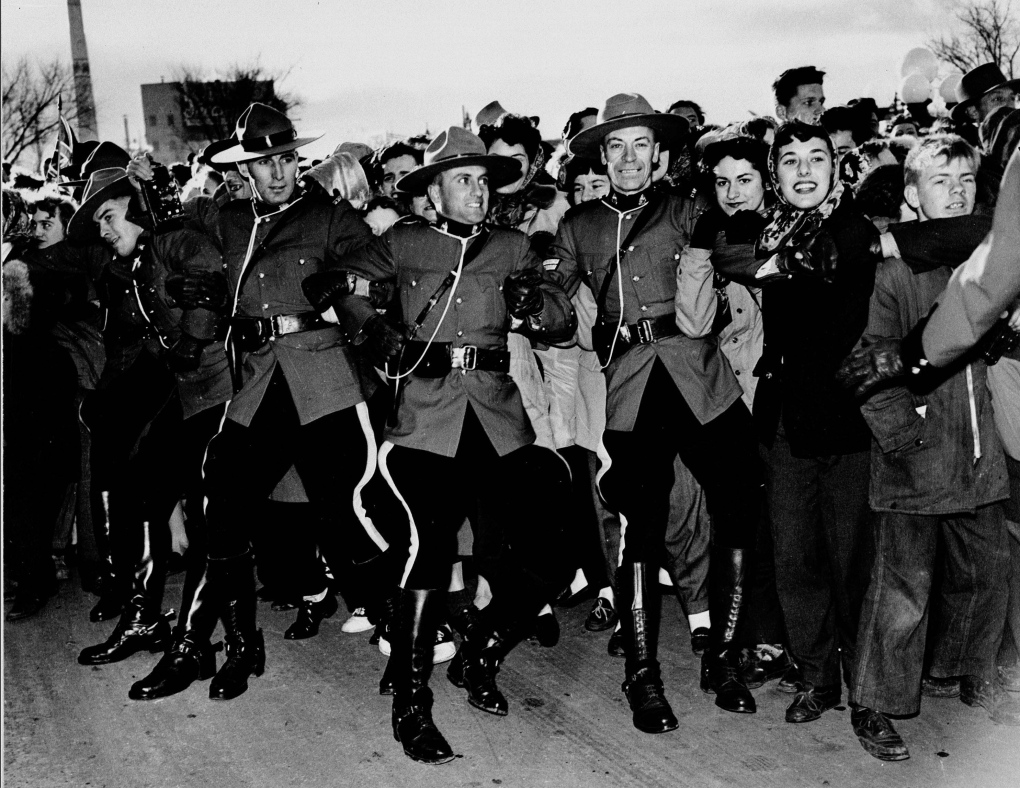 Manitobans are sending tributes and memories from across the province in the wake of the death of Queen Elizabeth II.

It was announced Thursday afternoon that Queen Elizabeth II – the Queen of the United Kingdom, Canada, Australia and New Zealand since 1952 – has died at the age of 96.

“Today’s news from Balmoral Castle is deeply saddening. Her Late Majesty was a stoic but reassuring source of stability in an ever-changing world, and was connected to the people of Manitoba,” Manitoba’s Premier Heather Stefanson said in a post on social media.

Stefanson said she met the Queen during one of her visits to Manitoba, and said the Queen’s dignity and grace is a memory she will cherish.

Manitoba’s Lieutenant-Governor Janice C. Filmon said the Queen made many personal connections during her six visits to Manitoba.

“Her Majesty enjoyed a wonderful relationship with all of the people of Manitoba, during her six visits to our province. She spent time in communities large and small throughout our province, making numerous lasting personal connections,” Filmon said in a statement.

“I share with all Canadians, and the other peoples of the Commonwealth, a great sense of loss on her passing.”

Her first official visit was as a princess with the Duke of Edinburgh in 1951. It is a visit Dwight Macaulay, Manitoba’s former Chief of Protocol, says many people still remember.

“They were the rock stars of the world in 1951 and quite frankly she stayed a rock star up until this very sad day,” Macaulay told CTV News.

Macaulay worked on three royal tours – moments he said he will never forget.

“This is a historic moment and a sad historic moment for the world that we’ve lost this wonderful person who, to me, was just the definition of grace and dignity and class.”

In 1953, Queen Elizabeth gave her first royal charter to the Royal Winnipeg Ballet. Years later in 2002, then principal dancer Tara Birthwhistle was surprised to be seated next to the Queen at dinner.

“She was the most engaging woman I have ever met,” Birthwhistle said. “She looked at everyone’s faces, she talked to each person. The conversation was amazing, the night just flew by.”

Birthwhistle said she will remember the Queen’s leadership and support, and also one little thing no one else may have noticed. 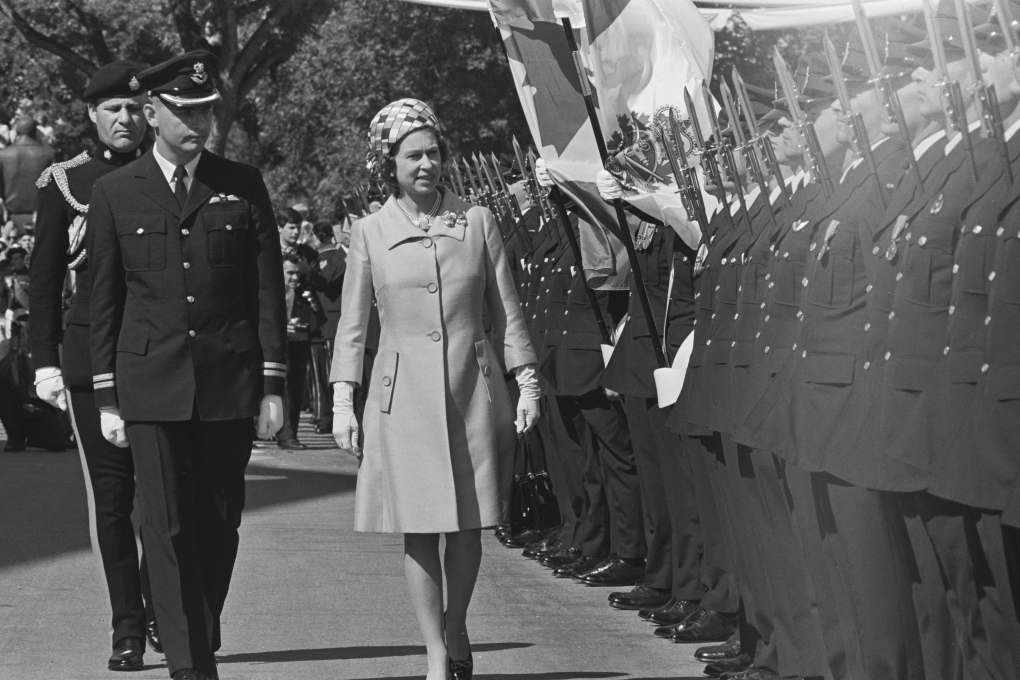 Winnipeg Mayor Brian Bowman said Winnipeggers are grieving the only monarch most have ever known.

“In her famous speech on the occasion of her 21st birthday, she promised that ‘my whole life, whether it be long or short, shall be devoted to your service’, and she kept this promise with perfect fidelity,” Bowman said in a statement.

“It is the end of an era; but, more than that, it is a time when we remember the special dignity, unfailing kindness, and spirit of quiet encouragement which The Queen personified throughout her long and illustrious reign.”

He passed on his condolences to the new King, and all members of the Royal Family.

“It just kind of made me sad to think that, you know, she’s no longer with us. That glorious reign that she had is over,” royal watcher Jodi Maxwell-Lee told CTV News shortly after hearing the news.

Maxwell-Lee was a young girl when she got to meet Queen Elizabeth II during her visit to Manitoba in 1984. She was in Dauphin at the time, and Maxwell-Lee said she was able to make her way to the front of the crowd to see the Queen.

“She stopped and she looked at me and she said hello,” she recalled, the memories faded over time but still treasured, of the Queen asking her where she was from and what her parents did for a living.

“As I got older and realized the significance of who she is, it’s really quite amazing that I actually spoke to her.”

Maxwell-Lee said she has been a fan of the Royal Family ever since, and received a letter from the Queen during her Jubilee Celebration.

The Health Sciences Centre took to Twitter sharing memories of the Queen’s previous visits to the hospital during her stop in Winnipeg in July 1970.

We have fond memories of Her Royal Highness Queen Elizabeth II visiting HSC and join Manitobans in offering our condolences on her passing. pic.twitter.com/RPTco3krua

Tina Jones, chairperson of the Health Sciences Centre Foundation, was awarded the Queen Elizabeth II’s Platinum Jubilee Medal, which celebrates Canadians dedicated to family, community and country. She said the honour has been much more humbling given the news of the Queen’s death.

“The Queen is an inspiration to many people and her leadership over 70 years may never happen again. To receive a Platinum Jubilee Medal on behalf of the Queen. It absolutely has to be the most important award I will receive in my lifetime,” she said. “I’m kind of speechless about it.”

“With great sadness, we mourn the passing of Queen Elizabeth II, the first passenger to travel through Winnipeg Richardson International Airport’s terminal before its official opening in July 2010,” a tweet from the airport’s official Twitter account reads. 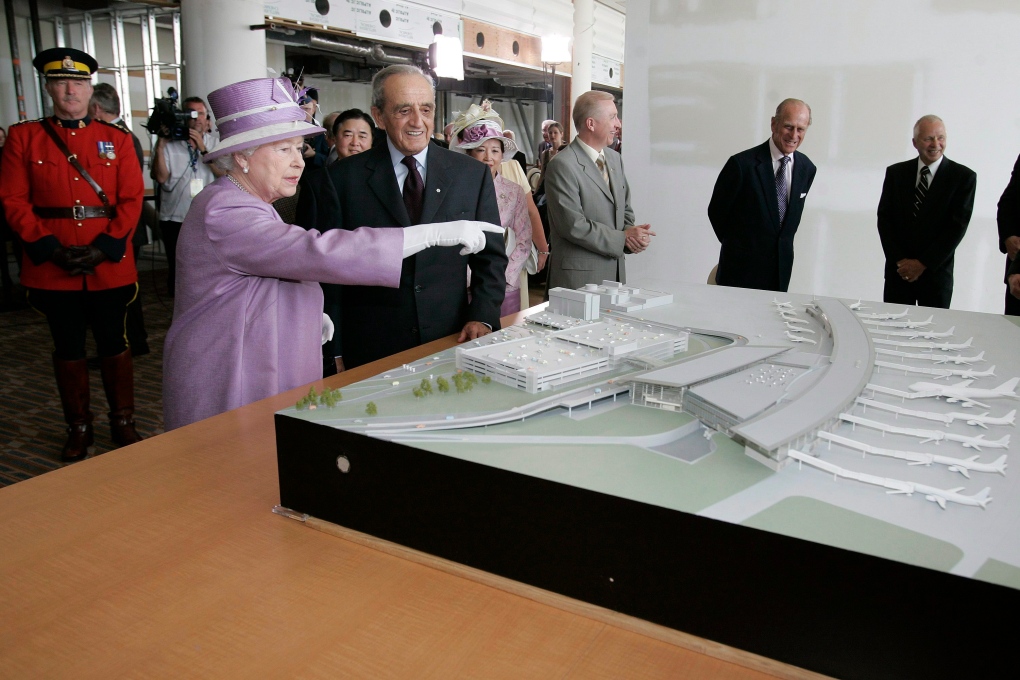 Queen Elizabeth and Arthur Mauro, chair of the Winnipeg Airports Authority, look over a model of the new terminal at James Richardson International Airport in Winnipeg, Saturday, July 3, 2010. THE CANADIAN PRESS/John Woods

The airport said during her visit, the Queen placed a letter and a gift to Manitoba youth in a time capsule. It is currently on display inside the airport.

During her visit, Her Majesty placed a letter to the youth of Manitoba and a gift inside a time capsule, which is currently on display in Queen’s Court just past the domestic/international security screening checkpoint. pic.twitter.com/Ebmwtuvw9d

A part of Winnipeg hockey history.

The Winnipeg Jets join the world in mourning the passing of Her Majesty Queen Elizabeth II.