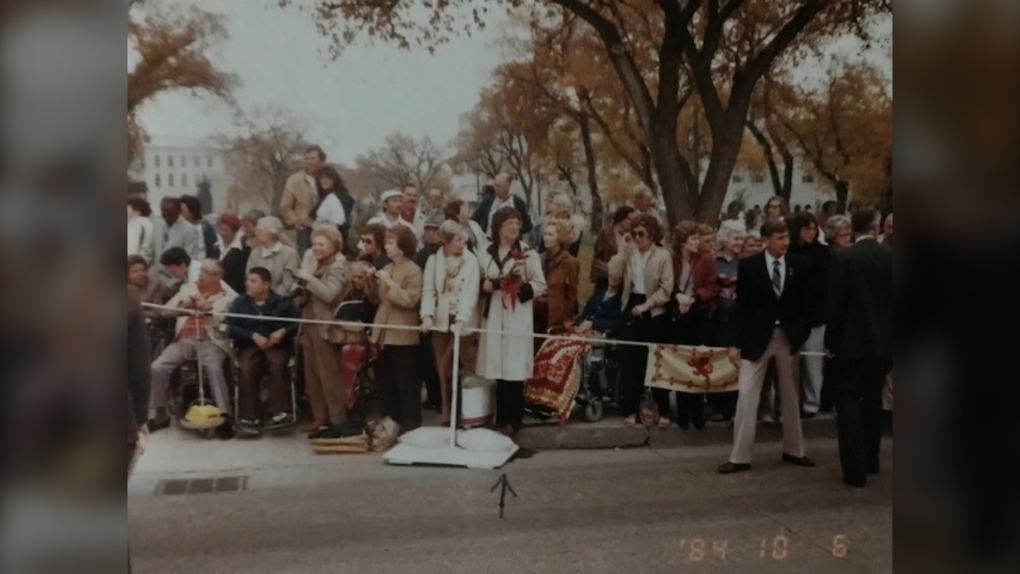 As royalists around the world mourn the death of Queen Elizabeth II, Manitobans are fondly remembering the special moments they shared with the late monarch during her many decades of service.

Kathy Wolos has been a devoted fan of the Royal Family her whole life.

“I always had a fascination, an interest in how they can exist under such a public spotlight and I think, for me, the Queen was a symbol of a sort of stability,” Wolos told CTV News Winnipeg in a phone interview.

When a royal visit from the Queen to Winnipeg was announced for October of 1984, Wolos knew she had to be there. Her mother came to town so they could catch a glimpse of the monarch together at the Manitoba Legislature grounds.

“But that just wasn’t quite enough for me. I wanted to be able to meet her,” Wolos recalled, a hint of giddiness still in her voice nearly 40 years later.

She decided to try for more face time with the Queen during a subsequent visit to St. Boniface Hospital, but this time she had a strategy.

Wolos noticed that during walkabouts, the Queen often made a point of greeting people who brought flowers. So, Wolos went to her florist, who also happened to be a devoted monarchist, and ordered a simple yet elegant arrangement fit for a queen.

“She was all excited to put this rose together with a lovely red bow and I decided, ‘well, I’m going to go four hours early.’”

Wolos did just that, planting herself on Tache Avenue near the hospital where the Queen was scheduled to greet the public.

Kathy Wolos is shown with other royal watchers on Tache Avenue waiting to meet Queen Elizbeth II during an official visit in October of 1984. (Source: Kathy Wolos)

After a long wait, she recalled the Queen arriving to throngs of well-wishers, initially walking to the other side of the intersection.

With that, Wolos thought a one-on-one greeting from the long-serving royal would not be in the cards.

“I didn’t think she had even seen the other side of the street. Then she turned at an abrupt 90-degree turn, looks at me and walks straight towards me,” Wolos remembered.

“She never stopped eye contact across that intersection. She knew exactly where she was going, and the people behind me kept saying, ‘she’s coming! She’s coming!’”

To Wolos’ shock, Queen Elizabeth came right up to her. Wolos curtsied, offered her the rose and welcomed her to Winnipeg. The Queen thanked her graciously, Wolos recalled.

“My heart was just about beating out of my chest,” she said.

As fast as she had arrived, the Queen was gone again, continuing to greet others down the street.

In the moments after, Wolos took a photo of the Queen on a film camera, praying it would turn out.

Sure enough, it did.

“I was delighted,” Wolos said.

Her brush with the late ruler didn’t end there.

She decided to send the picture to Buckingham Palace with a request to have it signed by Queen Elizabeth herself, knowing it was a long shot. To her surprise, she received the photograph back alongside a letter on royal stationary, noting the Queen only signed photographs for those she personally knew or on special occasions. 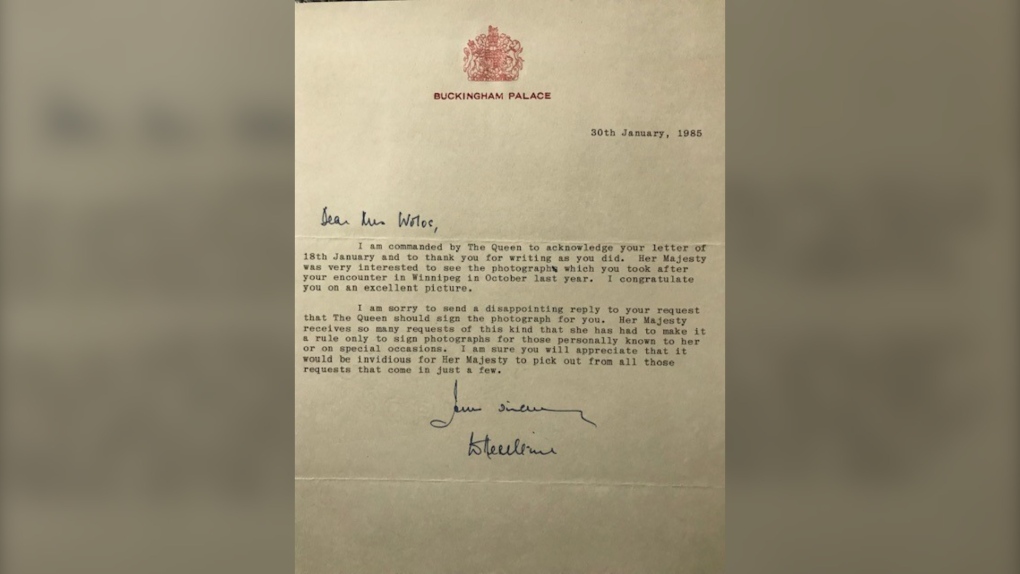 Kathy Wolos received this response from Buckingham Palace after mailing her cherished photo of the Queen in hopes the monarch would autograph it. Despite the request not being fulfilled, Wolos cherishes the letter as a keepsake. (Source: Kathy Wolos)

Still, Wolos has held on to the letter as a memento of that day, along with her cherished photo of the Queen and one of herself waiting to meet the royal, taken from across the street by another attendee.

Today, as the 96-year-old monarch’s coffin lies at St. Giles’ Cathedral so the public can pay their respects, Wolos is fondly remembering the Queen and the few moments they spent together on this side of the pond.

“It was truly a thrill of a lifetime, something I will never forget. I feel very blessed to have had that opportunity,” she said.

Terri Archibald did not have the same master plan when she and her family had a chance encounter with the royal.

She and her family had just moved to Winnipeg in 2010. Her husband was working on the redevelopment team of the Winnipeg Richardson International Airport. The opening of the new terminal was one of the stops during the Queen and the Duke of Edinburgh’s official visit that year, which served as her sixth and final to Manitoba.

Although Archibald’s family was invited to attend, she thought it was unlikely they would get to meet the royal up close and in-person.

“We went that day just in the hopes of maybe getting a quick glimpse of her as she was going by in the airport, but I never thought in a million years that our children would be right in front of her,” she recalled.

Archibald remembered it as a particularly sweltering day in July. Still, she insisted the family put on their best dresses and suits for the occasion.

“On our way, at the last minute, we decided to stop at a floral shop to get some flowers, so we got red Gerber daisies,” she said. “I was just thinking, ‘you just never know.’”

During the visit, the Queen dedicated a time capsule upstairs. Royal fans had the option of viewing the ceremony or waiting downstairs. The Archibalds opted for the latter, reasoning it would be less busy.

As they stood waiting to catch a glimpse, one of the Queen’s secret service agents waved for Archibald’s kids, Benjamin and Meghan, to come towards the rope. He asked if they would like to present their flowers to the Queen when she came down the escalator.

“So they went underneath the rope, and they waited there until she arrived and she came up to my children and they presented their flowers to her,” Archibald said.

“I was in tears. I don’t think my children realized the significance at the time. They were only eight and seven, but it was such a great, heartfelt moment.” 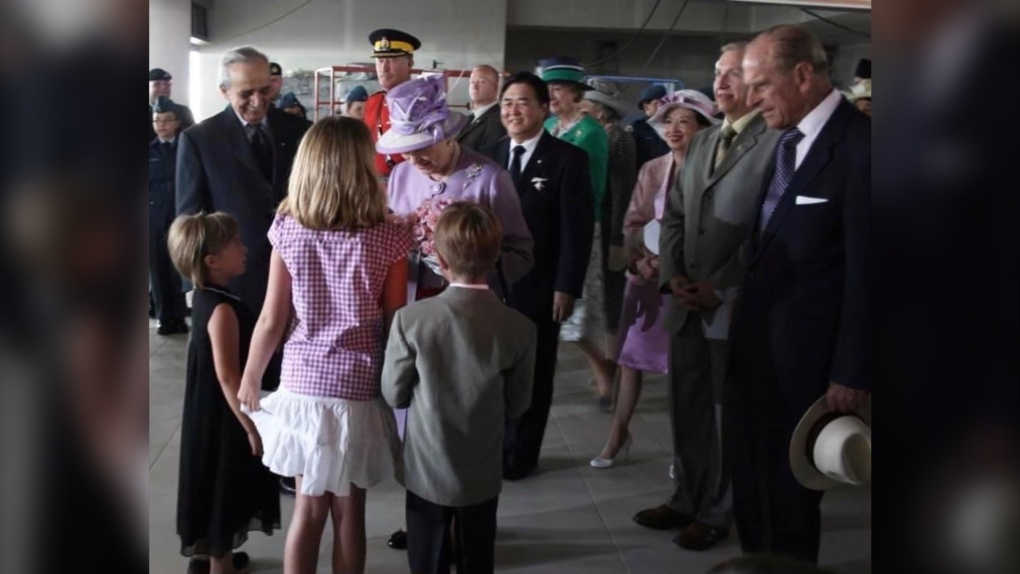 She noticed the Duke of Edinburgh talking to her son Benjamin. She asked him afterward what was said.

“My son said, ‘I don’t know,’” she recalled, laughing. “I’m sure because of his English accent, probably. It’s a strong accent. My son couldn’t understand him.”

They took a photo of the fateful moment, which is still displayed proudly in the entryway of their home.

Having been a long admirer of the Queen and the Royal Family, Archibald is grateful to have had that fleeting moment with the royal couple.

“You just feel so honoured to have that privilege. It was just a few minutes with her, but it was just such an honour.”

Want to Unsend That Embarrassing Text? Apple Now Has a Fix.

Elon Musk to buy Twitter for original offer of $44bn after…