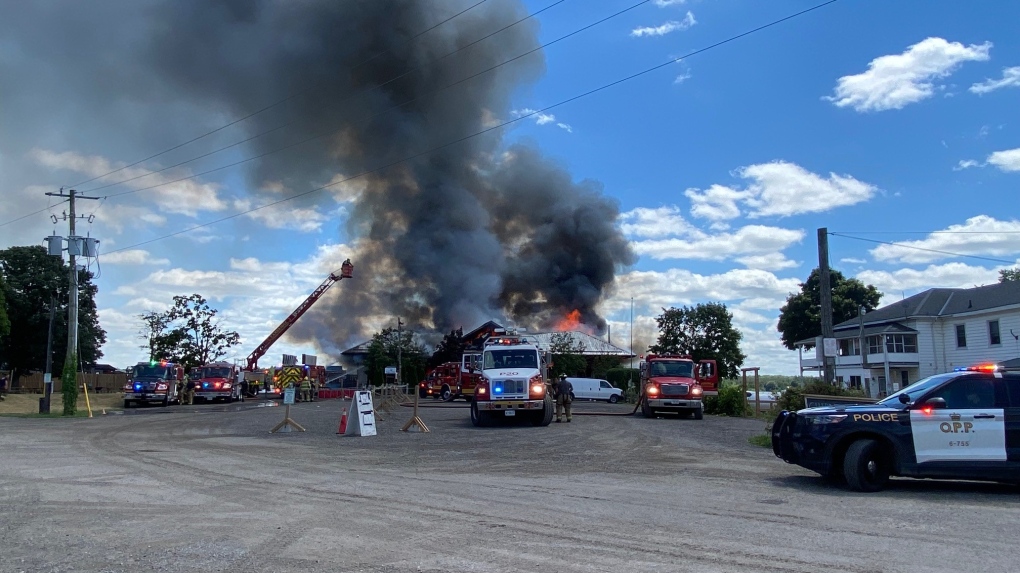 Several stations responded to a fire at the Old Marina Restaurant on Puslinch Lake.

The Cambridge Fire Department was first called to the McClintock Drive scene around 12:45 p.m. Saturday, and were later joined by Puslinch and North Dumfries fire departments.

They say the fire was “fully involved” when they arrived and they had to battle it outside from a defensive position.

“You couldn’t see anything but smoke at one point,” said witness Kristy Holdaway. “It’s just sad for the owners, you know, being in the park, you know the owners, and they’ve had a lot of hardship this year, so it’s sad for them.”

No injuries have been reported.

“We believe the area of origin is in the basement,” said Puslinch Fire Chief Tom Mulvey. “Unfortunately we haven’t been able to have a look around to see what the cause was. We don’t consider it suspicious at this time.

Firefighters from Kitchener and Guelph were also called in to help.

“It didn’t seem too bad at first and then all of a sudden I could see the flames coming through and the windows blowing out,” said witness Albert Christian.

Around 3:45 p.m., OPP tweeted that Lake Road was closed between Wellington Road 32 and Townline Road for the fire.

“For one hour there was no flames, just smoke, and then the flames came,” said witness Mona Ghaenizadeh. “It was very sad to see the front of the eyes of the owner and all of the people in the park. We love them and we care for them, they’re serving the community and many others. People have been coming from all around Ontario to have dinner there. My heart goes out to them.”

This is the second fire at the restaurant since it opened in the 1990s.

“People come from all over to come here. It’s hard to get reservations in here. It’s always packed, it’s always booked, and it’s not just a restaurant, there are activities, people who have their weddings booked here.”

Mulvey added they will be bringing an excavator to try and remove the roof to help deal with hotspots inside the building.

Bit of a fire at old marina restaurant at puslinch lake pic.twitter.com/0qGUdkDYYr

5 Ways to Protect Your New Business