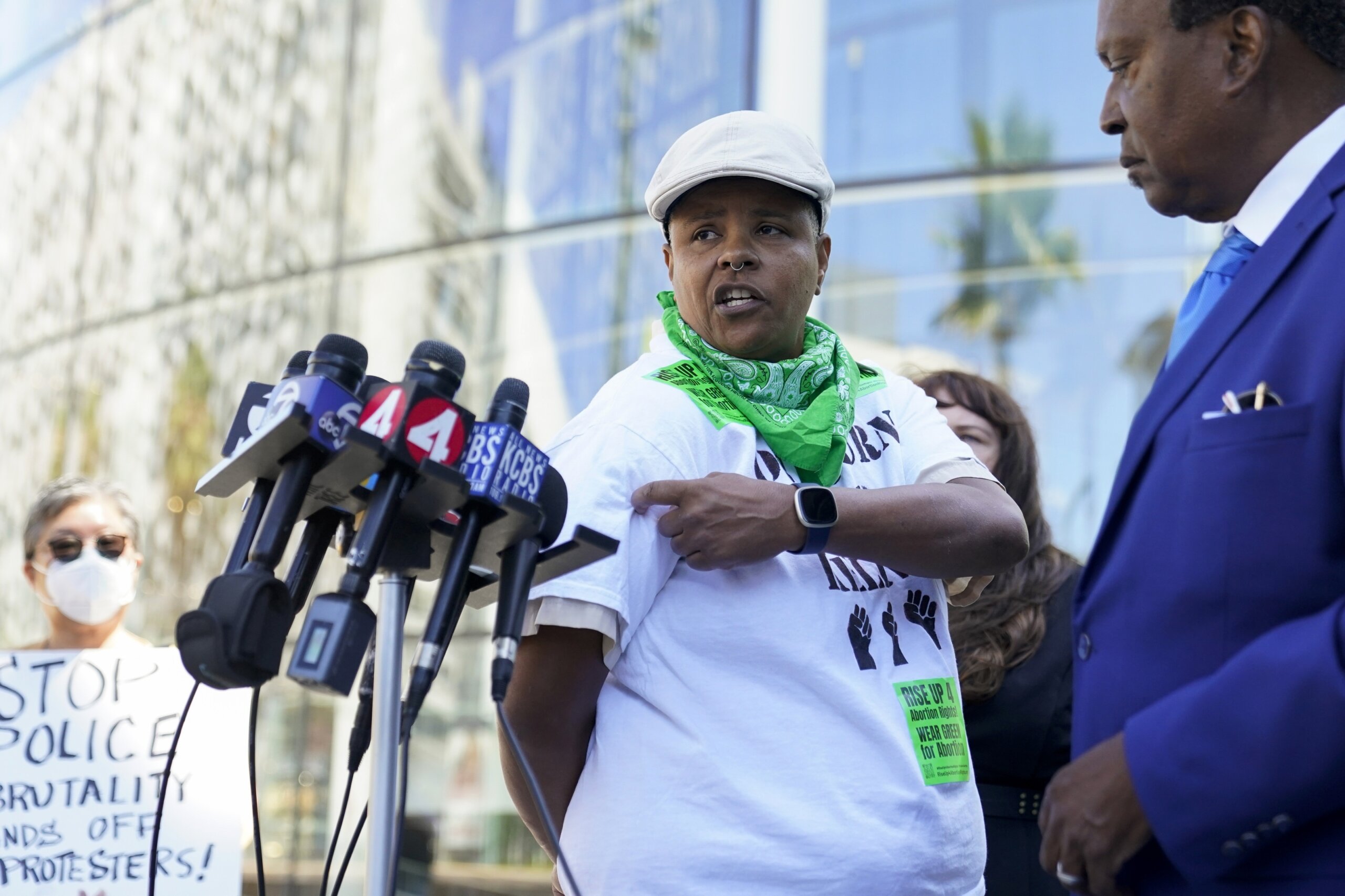 SAN FRANCISCO (AP) — A protester has filed a federal civil lawsuit against the city of San Francisco claiming that a paramedic, under the direction of a police sergeant, injected her against her will with a sedative while she was handcuffed after being removed from a Golden State Warriors championship game for demonstrating in favor of abortion rights.

Kareim McKnight and a friend, Amanda Piasecki, were at Game 5 of the Warriors series against the Boston Celtics at Chase Center on June 13 when they walked onto the main floor and displayed a banner that read “Overturn Roe? Hell No!” A draft of the U.S. Supreme Court’s decision in Roe v. Wade was leaked in May.

Video shared by McKnight’s attorney, John Burris, who filed the lawsuit this week, showed security guards dragging McKnight and Piasecki by their feet out of the venue.

McKnight said that once they were outside, a San Francisco Police sergeant threatened to have her sedated.

She said San Francisco Fire Department employees then strapped her to a gurney and wheeled her toward an emergency vehicle.

“While I was on the ground, handcuffed in front of the emergency vehicle, one of the firefighters came with a needle towards me and I couldn’t believe what I was seeing and I flinched and I said, ‘No!’ what if I’m allergic, you can’t just inject me,’” she said.

McKnight said the paramedic didn’t ask her any medical questions and wouldn’t tell her what she was injected with. She said she felt dizzy and began slurring her words.

“Giving an injection to a protester against her will is shocking and illegal,” Burris said, adding that officials violated McKnight’s Fourth Amendment right to control her own body.

She was taken for observation to a Kaiser Permanente hospital, which gave her a document showing she was given 5 milligrams of a drug called Versed, a sedative often prescribed to reduce anxiety. McKnight shared a photo of the document with The Associated Press that also described her as being in “a distressed emotional state after an altercation with SFPD.”

McKnight said she was not in emotional distress.

San Francisco’s policy on dealing with adults “with severe agitation posing a danger to self or others” allows for the use of the drug midazolam, a short-acting sedative sold under the brand name Versed, according to the county’s emergency medical services protocols.

Jen Kwart, a spokeswoman for City Attorney David Chiu, said the office couldn’t comment on the lawsuit because it had not yet been served.

The use of sedatives by authorities first got national attention in 2020 when protesters seeking police reform highlighted the death of Elijah McClain, a Black man who was stopped by police in suburban Denver in August 2019. Paramedics were called and injected McClain with the powerful sedative ketamine, but they incorrectly estimated his weight, giving him more than 1.5 times the dose he should have received.

A 2020 analysis by The Associated Press of policies on the use of ketamine and cases when the drug was used during police encounters uncovered a lack of police training, conflicting medical standards, and nonexistent protocols that have resulted in hospitalizations and deaths. The review found there are no federal standards for law enforcement or emergency medical personnel on the drug’s use. State policies and reporting requirements vary, so it’s not clear how regularly it’s used during police encounters and why.

Burris said that in his more than four decades as an attorney, he has never heard of authorities sedating a fully restrained protester.

“The worst part of giving her the injection was that she was strapped to a gurney, handcuffed, and therefore was not a danger to herself or anyone else,” he said.