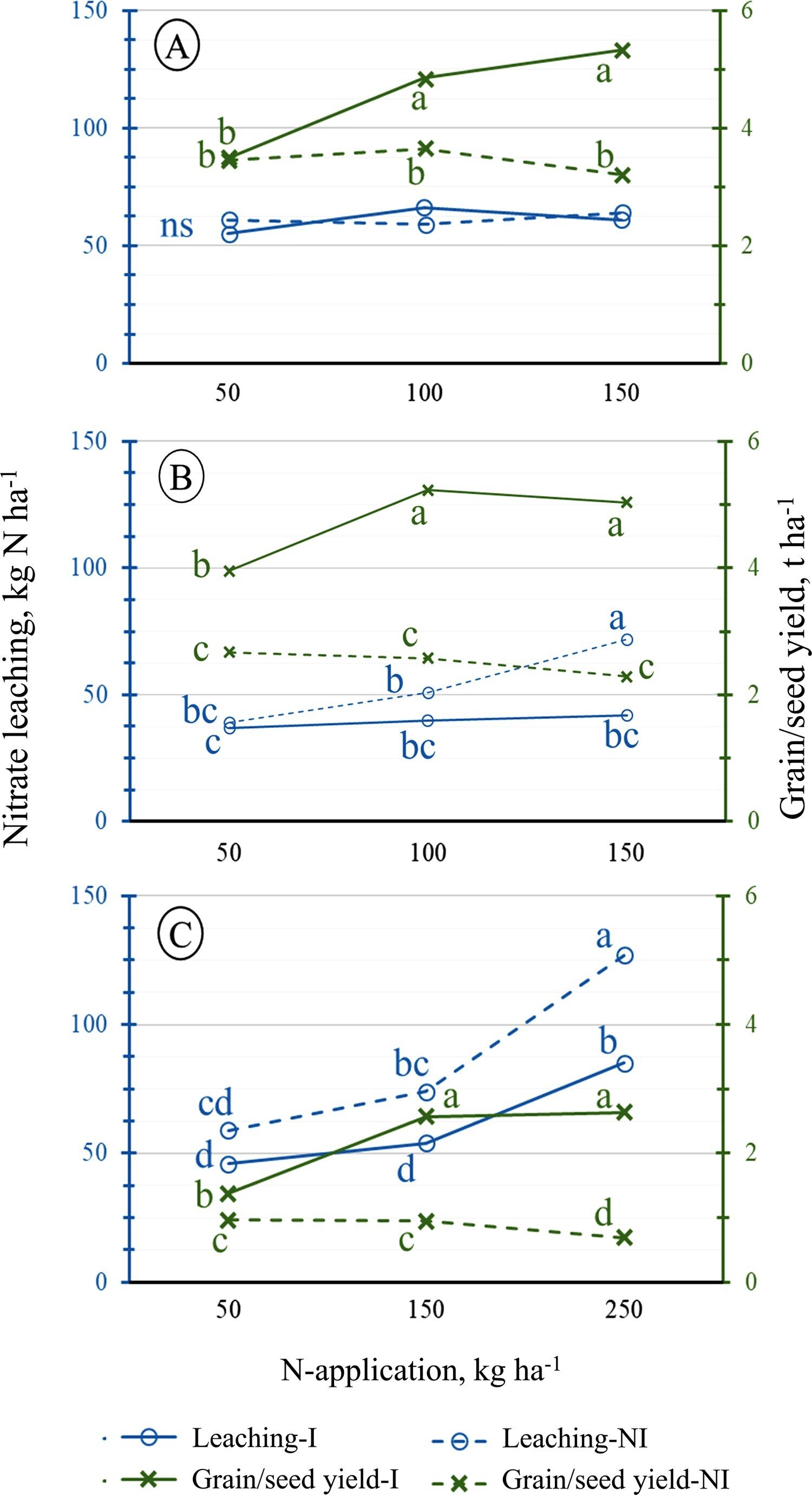 Imagine a hot and dry summer day, it might have been dry and hot for a long time. The birds are singing and the irrigation machines in the fields are running at full speed. But what does irrigating crops really mean for farmers’ yields and how does it affect nitrate leaching? Researchers from Aarhus University have found the answer in data from 1988-1992.

“We have worked with a dataset that is more than 30 years old, but even though it is old, it is still useful and relevant today. We used the data to delve into a years-long debate about whether irrigation is good or bad, for example in terms of nutrient leaching,” explains postdoc Loraine ten Damme from the Department of Agroecology at Aarhus University.

At the right time and place

The question of whether irrigation is good or bad is essentially about two things. On the one hand, irrigation is expected to increase the risk of nitrate leaching because increased irrigation increases percolation—that is, it increases the leaching of excess water into groundwater. On the other hand, irrigation has the advantage of increasing plant growth and thus nutrient uptake, which actually reduces the risk of leaching. The more nitrogen the plants absorb, the less is left in the soil, which means less leaching. But which of the two views is the right one?

“Our data point to the importance of managing both irrigation and nitrogen correctly. This means that if you fertilize with the right amount of nitrogen at the right time, and you also irrigate at the right time, you will significantly reduce nitrate leaching and you will achieve a higher yield as well,” explains Loraine ten Damme.

Conversely, mismanagement of irrigation will cause increased leaching and limited yield. So, as such, there is no clear answer to whether irrigation is good or bad. However, research shows that there are good benefits to having a clear strategy for your management, even if it’s not always straightforward.

“There are many things that come into play in relation to fertilization and irrigation strategies that make it a bit difficult to plan. You have to think ahead, because if you add a certain amount of nitrogen but don’t irrigate enough, the plants won’t be able to take up the nitrogen. The nitrogen then remains in the soil at risk of leaching and you might as well have saved the money on fertilizer. Thus, if you have fields that can’t be irrigated, you should adapt your fertilization strategy, i.e., apply less fertilizer, because no one can predict what the weather will be like during the season,” says Loraine ten Damme.

The experiments behind the data the researchers worked on took place in 1988-1992 on coarse sandy soil in Jyndevad. During that period, there were years of drought and wet years, which according to the researchers gives them the opportunity to see what effect irrigation has on grain, seed and straw yield.

“We can see that in years with appropriate precipitation, there was no noticeable difference in leaching, whether or not crops were irrigated. This is obvious since the need to irrigate has not been very high in those years, but when we look at the data for the dry years, we see a big difference between irrigated and non-irrigated fields, particular at the relatively higher levels of nitrogen application,” says Loraine ten Damme.

In the trials, three different amounts of nitrogen fertilizer were applied to both irrigated and non-irrigated experimental plots. The data from the dry years clearly showed that when a crop is not irrigated, increased fertilization has little effect on crop yield but leads to increased leaching. In contrast, the data showed that the irrigated crops could make use of higher levels of fertilizer, without the risk of increased nitrate leaching.

“Normally, nitrogen will follow the water, and that also means in theory that the more you irrigate the more leaching you will risk, but our studies show that this is actually not necessarily the case. When you irrigate at the right times, crops can take up more water and more nitrogen. That way you may not risk increased leaching, but increase crop productivity,” says Loraine ten Damme.

But should you water all the time to increase plant growth and reduce leaching?

“No, too much water creates anaerobic conditions, which means that plants can drown. Moreover, if you overwater, there is a high risk that fertilizer nitrogen will be leached during the growing season,” she explains.

The same goes for nitrogen. You can keep adding nitrogen, but at some point, you’ll reach a level where the plants can’t utilize any more, i.e. extra fertilizer does not increase yield. You reach a saturation level and anything above that will be a waste of effort, money and will increase the risk of leaching.

There is no easy solution, as many factors come into play when planning your fertilization and irrigation strategy.

“As a farmer, you need to know when your plants are growing best in order to fertilize and water correctly to get the most out of your efforts. You also need to keep an eye on the weather, which is often difficult to predict, especially if you want to plan how to fertilize at the start of the growing season. Irrigation decision support systems help farmers to quantify the irrigation needed for the crop in its specific growth-stage while minimizing the risk of overwatering. However, it’s important to remember that if you’re only applying small amounts of nitrogen, then the need for irrigation isn’t that great, but if you have a fertilization strategy with larger amounts, then you should also irrigate to get the maximum benefit from the nitrogen and the maximum gain in terms of higher yields and less leaching,” concludes Loraine ten Damme.

A Murderous Legal Thriller Was More Successful Than Anyone…