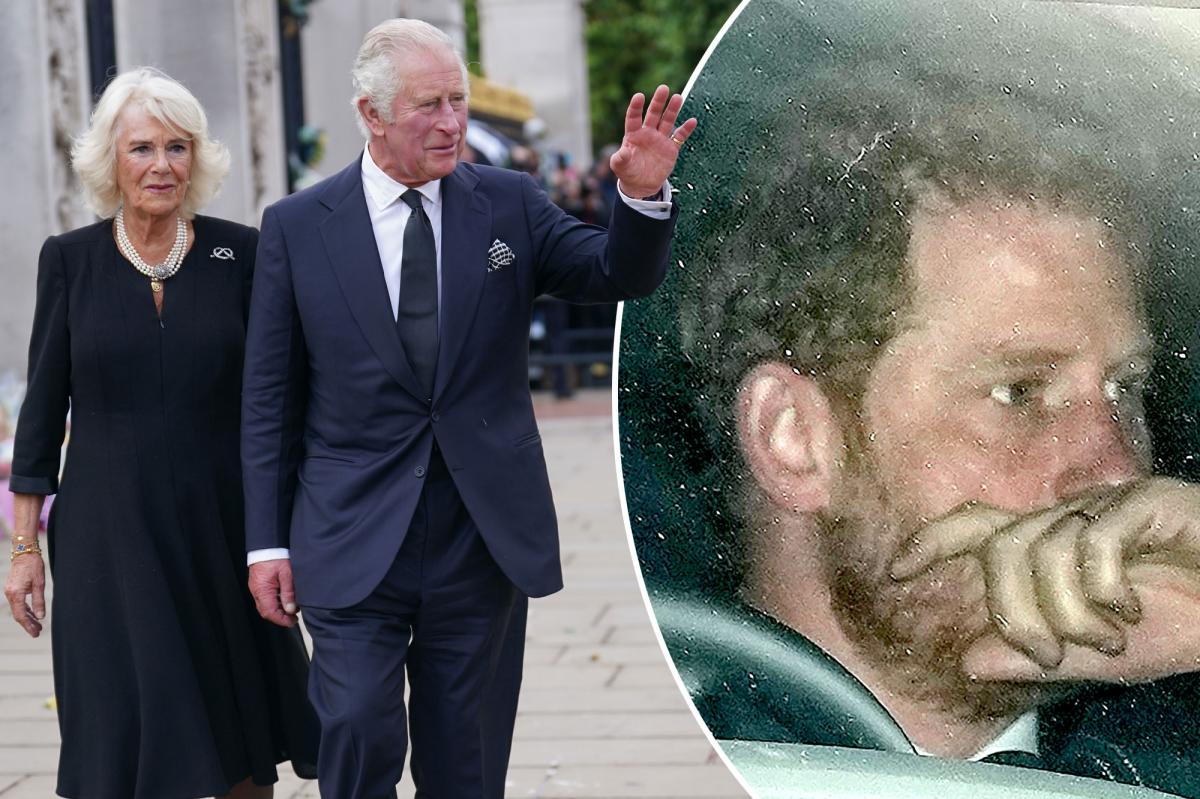 Prince Harry — who is said to have tensions with his stepmother, Camilla Parker-Bowles — will have to bow to her now that she is Queen Consort, sources told Page Six.

In fact, he likely would have been expected to do so on Thursday while the family was gathered at Balmoral following Queen Elizabeth’s death on Sept. 8 at age 96.

One well-placed palace source said: “The personal impact is likely the protocol changes that roll into action almost immediately.

“The family will now have to bow or curtsy to King Charles and Queen [Consort] Camilla.”

Harry, the Duke of Sussex, looked distraught as he was driven into the gates of Balmoral, his grandmother’s beloved Scottish estate, hours after her passing.

He was not on the earlier flight carrying his brother, Prince William, his uncles Princes Andrew and Edward, and Edward’s wife Sophie Wessex. Instead, he flew to Scotland on a separate private jet and arrived just before 8 p.m., UK time, to be reunited with his estranged family.

The queen passed away in the afternoon, before most of her family arrived. Only King Charles III and his sister, Princess Anne, were reportedly there.

Page Six has previously reported that Harry is “no fan” of Camilla, who had a long-running affair with his father while King Charles III was still married to Harry and William’s mother, Princess Diana.

Nonetheless, tradition dictates he will need to bow to the Queen Consort.

Asked what William and Harry would now call their father, Little said: “It would still be Pa. The Queen and Prince Philip were Ma and Pa to their children; whatever Willam and Harry called Charles and Camilla yesterday, they will call them that today.”

Harry was the first of the royal family to leave Balmoral early Friday morning on a British Airways flight back to London, where he was set to be reunited with wife Meghan Markle at their Windsor home, Frogmore Cottage. He was seen leaving around 8.20 a.m. UK time.

Markle did not join her husband in Scotland despite originally planning to. Although insiders told us there was nothing nefarious inside the decision, the BBC’s long-running royal editor, Nicholas Witchell, said on air she may well not have been welcomed there.

Harry was seen giving an airport worker a hug as he made his way to the plane Friday morning.

Sources told Page Six that he will stay in the UK for the next 10 days until the Queen’s state funeral, widely believed to be scheduled for Monday, Sept. 19.

The prince will celebrate his 38th birthday on Sept. 15.

Denial of responsibility! My droll is an automatic aggregator of the all world’s media. In each content, the hyperlink to the primary source is specified. All trademarks belong to their rightful owners, all materials to their authors. If you are the owner of the content and do not want us to publish your materials, please contact us by email – [email protected]. The content will be deleted within 24 hours.
King Charles IIIMeghan MarklePrince HarryQueen Elizabeth IIroyal family
0
Share

The Queen: England-South Africa Test to resume on September 10