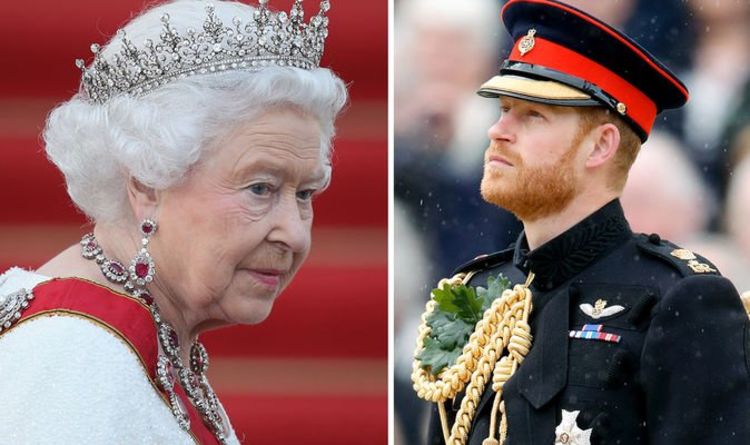 Prince Harry, 36, is extremely proud of his military links and focusses much of his charitable work on helping veterans. The Duke of Sussex served in Britain’s forces for 10 years and also held several honorary positions.

Among Harry’s ceremonial titles was that of Captain General Royal Marines, a role passed down to him by his grandfather Prince Philip, 99.

Following the Duke and Meghan Markle’s decision to step down as senior royal it was decided they would no longer be able to represent the Queen in an official capacity.

While the couple were allowed to keep their royal patronages going forward, Prince Harry had to give up the honorary military posts he held as a working royal.

During his time serving in the forces, Harry rose to the ranks of Lieutenant Commander in the Royal Navy, Major in the British Army and Royal Marines and Squadron Leader in the Royal Air Force.

The Duke will get to keep the titles he earnt during his military career but may have to relinquish the ceremonial ones for good.

These are the ceremonial military titles Prince Harry faces giving up:

They ruffled feathers at the end of last year but seemingly getting involved in the US election, urging Americans to vote.

Royal Family members are expected to remain politically neutral and some felt Meghan and Harry had overstepped the mark.

Some royal traditionalists have claimed the Queen could strip the couple of their HRH styles and Duke and Duchess of Sussex titles for breaching royal values.

Whether or not Meghan and Harry hold on to their royal status will be decided by the Queen later this year.

Commenting on whether or not the Queen will remove the Sussexes’ titles, constitutional expert Iain MacMarthanne said:  “It is now a year since the duke and duchess of Sussex announced their intended withdrawal from front line royal duties.

“The agreement that was reached facilitating this move is due to be reviewed in March.

“At this juncture whether or not their activities this past year have met with their undertakings will be considered.

“They accepted that they would in no way act or behave in a manner which would undermine the crown, whether or not this condition has been satisfied will be for the Queen and her advisors to determine. Beyond this group any consideration of the matter is pure speculation.”

No charger, no earphones with Galaxy S21: Samsung does an Apple. Again

Doug Liman Reveals When the Sequel Will Get Made