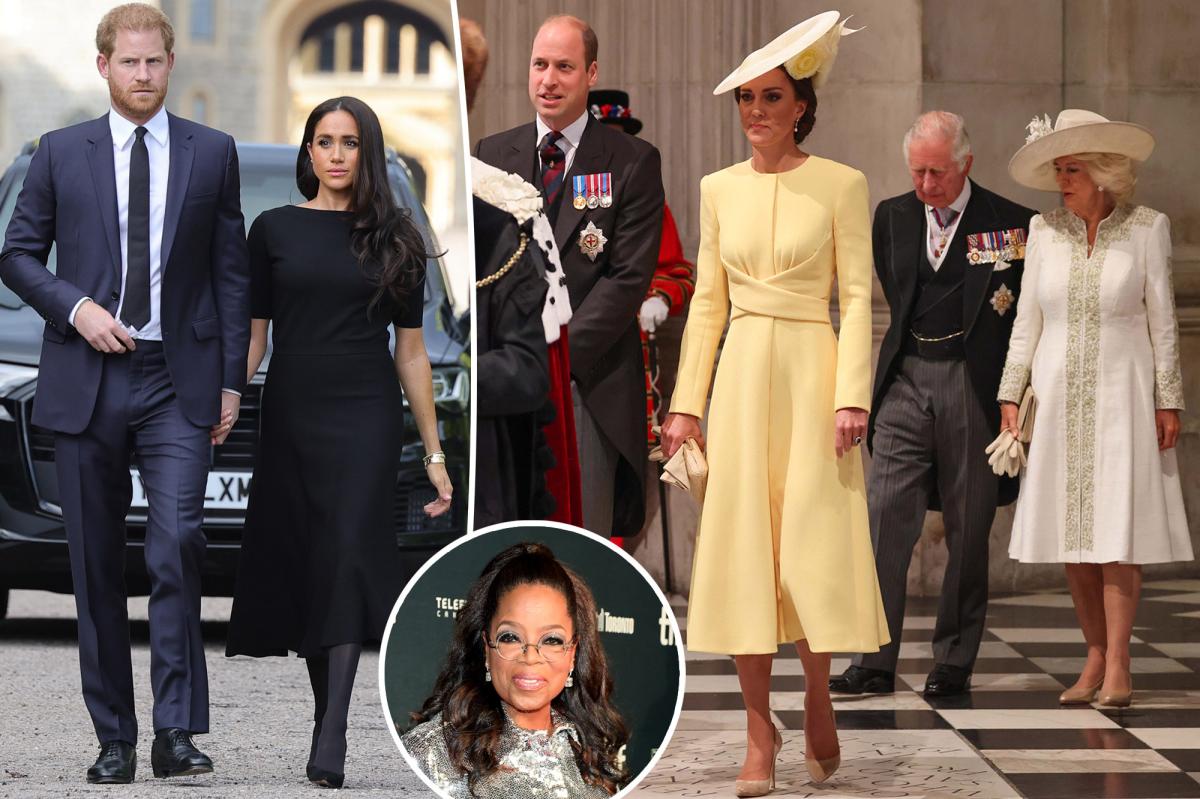 Not all hope is lost.

Oprah Winfrey believes Prince Harry and Meghan Markle can make peace with the royal family as they mourn the loss of Queen Elizabeth II.

“This is what I think, I think in all families — you know, my father passed recently, this summer — and when all families come together for a common ceremony, the ritual of, you know, burying your dead, there’s an opportunity for peacemaking,” Winfrey, 68, told “Extra” in an interview published Monday.

She added, “Hopefully, there will be that.”

The talk show host’s comments on the royal family’s ongoing tensions come after the Duke and Duchess of Sussex showed a rare sign of unity when they were spotted reuniting with Prince William and Kate Middleton to honor the Queen, who died at age 96 on Sept. 8.

A royal source told Page Six that William, 40, had extended the invitation to his estranged brother, 37, and sister-in-law, 41.

“We are all very grateful — both sides putting all things aside for the Queen,” the source said.

The gathering marked the first time Harry and Markle appeared in public with the Prince and Princess of Wales, formerly the Duke and Duchess of Cambridge, since Commonwealth Day on March 9, 2020.

Winfrey was notably at the center of much of Harry and Markle’s drama with royal family members after the duo resigned from their royal duties and moved to California thanks to her infamous interview with the Sussexes in March 2021.

During the bombshell sit-down, Markle shared that she had experienced suicidal thoughts after joining the royal family and that Buckingham Palace did nothing to help her mental health when she came to them for help.

The “Suits” alum, who is biracial, also notably shared that a member of the royal family had voiced concerns over her and Harry’s son Archie’s skin color.

Markle even addressed rumors that she made Kate Middleton cry, claiming that it was actually the other way around and that the Middleton brought Markle to tears days before her wedding to Harry.

At the time, Markle shared that Middleton had apologized and that she had “forgiven her.” Even still, the royal family was reportedly mortified that Markle and Harry had divulged so much information so publicly about the family.

And the Queen was apparently “sad” about the interview but remained close with Harry nonetheless. Harry and Markle even visited the UK in June to celebrate the Queen’s Platinum Jubilee and introduce her to their 1-year-old daughter Lilibet.

Harry broke his silence on his grandmother’s death on Monday, sharing in a statement, “I cherish these times shared with you, and the many other special moments in between. You are already sorely missed.”

Denial of responsibility! My droll is an automatic aggregator of the all world’s media. In each content, the hyperlink to the primary source is specified. All trademarks belong to their rightful owners, all materials to their authors. If you are the owner of the content and do not want us to publish your materials, please contact us by email – [email protected]. The content will be deleted within 24 hours.
Kate MiddletonMeghan Markleoprah winfreyPrince HarryPrince WilliamQueen Elizabeth IIroyal family
0
Share