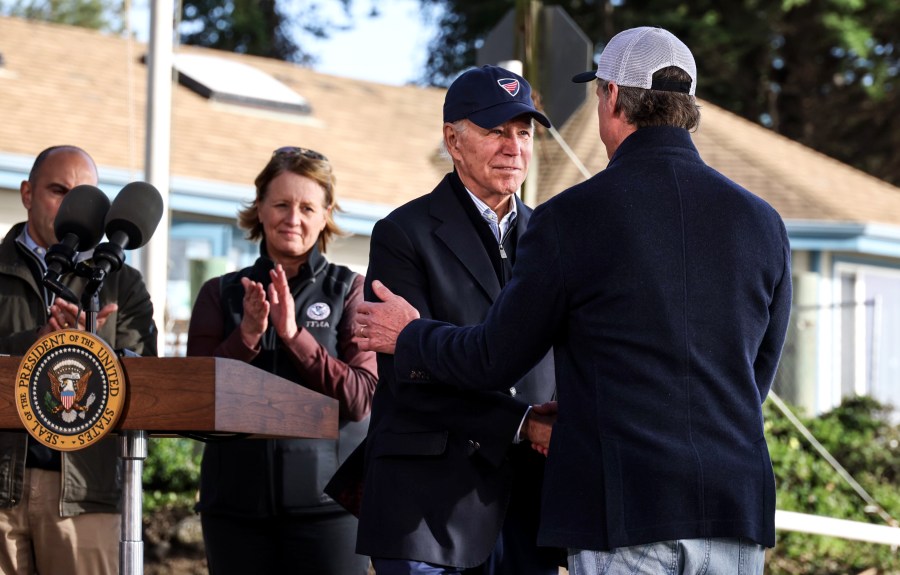 “Over the past weeks, Californians have endured some of the deadliest and most destructive storms in recent memory,” Newsom said Thursday. “I am grateful for the president’s commitment to helping California recover.”

Biden began the day by flying from the White House on Air Force One to Moffett Federal Airfield in Mountain View. He later boarded a helicopter for an aerial tour surveying storm damages across Santa Cruz County.

An impressive presidential motorcade drew crowds of residents hoping to catch a glimpse of Biden during his ground tour around Capitola and Seacliff State Beach in Aptos. “The whole town is here!” one teenager holding a skateboard exclaimed.

Parker Kava, 7, of Aptos, said if he could talk to the president, he’d say, “Thank you for helping us.”

Spirits of storm-weary locals lifted when Biden waived through his SUV’s window as the motorcade departed the beach.

A brutal “parade of storms” left behind more than $55 million in damages in Santa Cruz County, officials said. Statewide, nearly 150,000 people were under evacuation orders and 21 victims died in storm-related incidents, including lightning strikes and falling trees.

“To the people in California: The country is here for you and with you.  We are not leaving until things are built back and built back better than they were before.  You can recover from storms.  We’ll be with you every step of the way — and I mean that sincerely — every step,” Biden promised.

Biden approved Newsom’s request for an expedited Major Disaster Declaration for several counties and sent 500 FEMA workers to California. The declaration allows residents who suffered losses to be eligible for federal disaster assistance.

The president said, “Yesterday, I directed the federal government that we’ll cover 100 percent of the cost of removing debris, and emergency measures like sheltering evacuees and paying overtime for first responders.”

Biden personally met with and reassured Chuck Hammer, owner of Pizza My Heart restaurant. Hammer told KRON4, “He was very personable. He truly wanted to hear the story of each one of the restaurant owners here.”

The National Weather Service said between December 26 and January 17, 35 inches of rainfall was recorded in the Santa Cruz Mountains in Boulder Creek.

Sunny weather finally returned on Thursday and damages from the relentless rainstorms are still being tallied across the state.

“We know some of the destruction is going to take years to fully recover and rebuild,” Biden said.