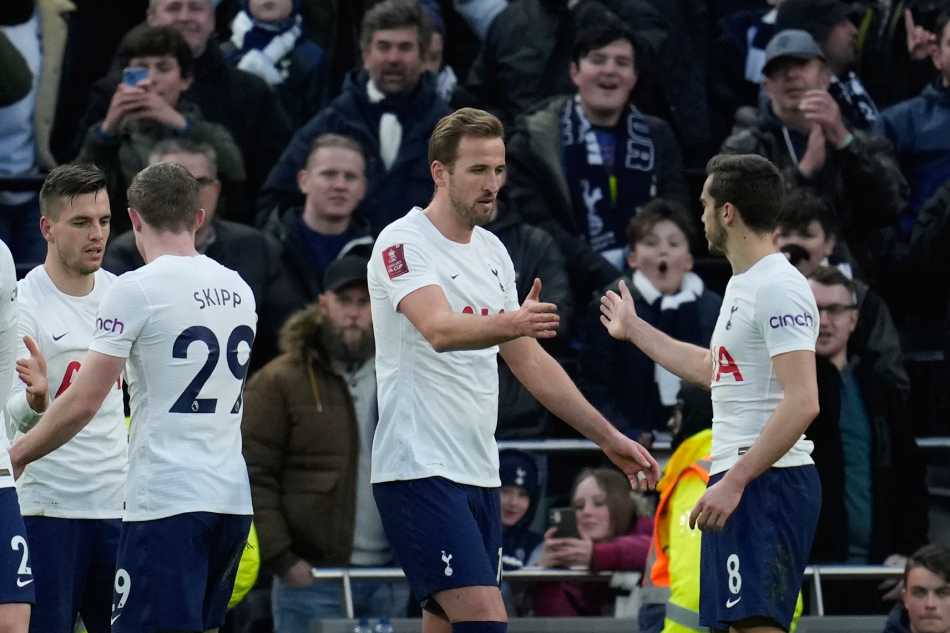 Kane finished beyond Dean Henderson to score the 200th league goal of his career early on, though Spurs were forced to withstand long periods of pressure as Forest produced a lively display.

Antonio Conte’s team should have made the points safe when Steve Cook bizarrely handled on his own goal-line 55 minutes in, but Kane’s spot-kick was well saved by Henderson to his right.

Yet Kane atoned as he nodded home Richarlison’s cross in the 81st minute, making the Spurs striker the Premier League’s joint-third highest goalscorer in the process.

Tottenham needed just five minutes to hit the front through a swift counter-attack, as Kane took Dejan Kulusevski’s pass in his stride before stroking into the bottom-left corner from 18 yards out.

Having broken the Premier League’s one-club goalscoring record against Wolves last week, Kane needed just five minutes to score his 200th league goal on Sunday, later recovering from a missed penalty to net for the 187th time in the Premier League.

It puts him joint third in the Premier League’s all-time goalscoring charts, alongside Andy Cole. Only Alan Shearer (260) and Wayne Rooney (208) are now ahead of the England captain, who has scored against 31 of the 32 teams he has faced in the Premier League. Only Brentford have prevented him from finding the net, doing so twice.

Kulusevski made a valuable contribution to Spurs’ successful bid for a top-four finish after arriving from Juventus in January, and the Sweden international has picked up where he left off this season.

After laying on the opener, the 22-year-old has two Premier League assists this season and 10 since his debut in February. No other player has teed up as many goals in the competition in that time.

Earlier,West Ham United opened their Premier League goals and points account for the season as a deflected effort by Pablo Fornals sealed a 1-0 victory at Aston Villa.

The Spaniard took aim from outside the box in the 74th minute and his effort looped in after hitting Villa’s Ezri Konsa, leaving Emi Martinez in goal no chance.

It was reward for an improved second-half performance by West Ham who offered little before the break.

Meanwhile, Newcastle United were lucky to share the spoils with Wolverhampton Wanderers with Allan Saint-Maximin’s stunner snatching a late draw for them at Molinuex.

The French forward smashed home a memorable equaliser in the 89th minute to cancel out Ruben Neves’ 37th minute strike.

Newcastle were without club-record signing Alexander Isak and key man Bruno Guimaraes for the clash with Wolves.

Isak had joined Newcastle in a £59million (€70m) deal from La Liga side Real Sociedad on Friday.

However, the striker was not eligible to play for Eddie Howe’s side against Wolves as he has not yet received a work permit, meaning he will have to wait for his Premier League debut.

Newcastle were also without influential midfielder Guimaraes after the Brazil international sustained an injury in Wednesday’s EFL Cup tie with Tranmere Rovers.

(With inputs from Agencies)

Ian slows down as death toll from hurricane grows in Florida

Tesla is making large fleet deliveries at the end of the…