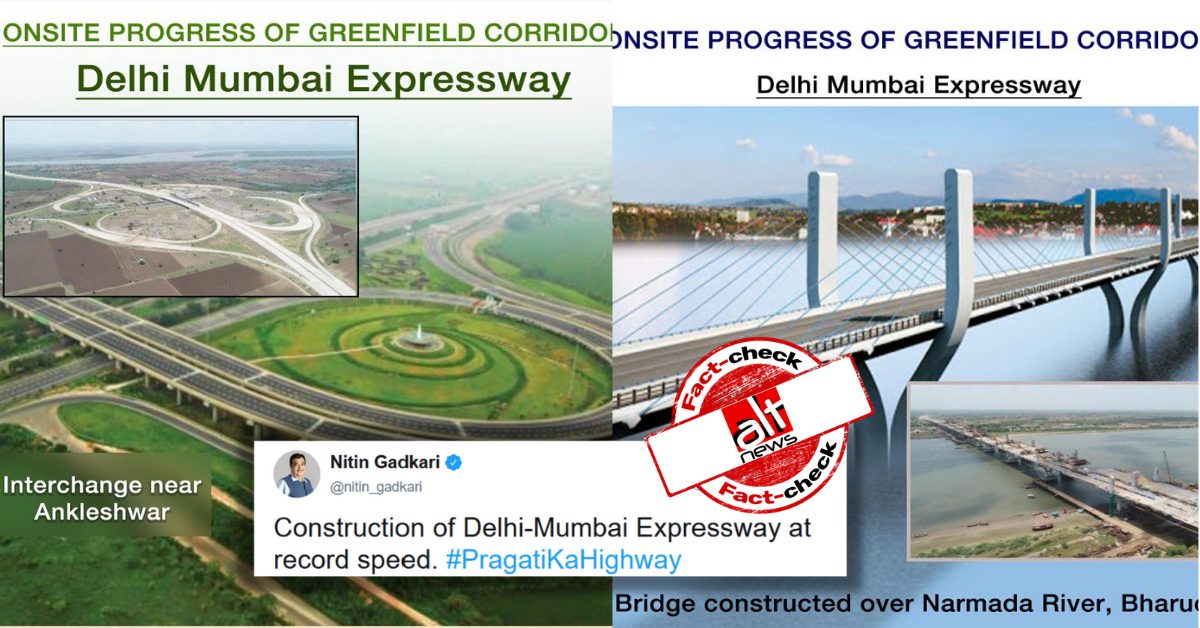 Photos of an interchange (road) have been shared to portray the ‘progress’ of the Delhi-Mumbai Expressway. “Interchange near Ankleshwar,” the caption reads. The photos attempt to show the before and after pictures of the expressway.

BJP Maharashtra’s Pravin Alai tweeted the photos with the hashtag #PragatiKaHighway and tagged Nitin Gadkari, the Union Minister for Road Transport and Highways.

Nitin Gadkari had also tweeted the photos, along with two more images to show the alleged progress of the construction of the bridge over the Narmada river. He later took down the tweet but an archived version can be found here.

Hindi news channel India TV has used the same photograph in an article on Delhi-Mumbai expressway.

Union Minister Nitin Gadkari said that out of the total length of the project, 350 km has already been constructed and works for construction of 825 km is in progresshttps://t.co/UAfRg3uIkD

For the first image, we performed a reverse image search and found multiple websites suggesting that the interchange in the photo is the Yamuna Expressway. Taking this as a clue we performed several keyword searches on Google and came across an article by The Economic Times that carried a similar photo captioned as “Yamuna Expressway, Greater Noida to Agra”. The article also gives credit for the image to Jaypee Group.

We then checked the website of Jaypee and found a photo of the interchange on their gallery under the topic “expressways”.

The photo is also used as a banner image on the Yamuna Expressway Industrial Development Authority’s (YEIDA) website, with a superimposed text that reads “Yamuna Express Way… Future is Here”.

Below we have added 3D Google Maps photos further proving that the interchange in Ankleshwar and the Yamuna Expressway interchange are very different.

The Delhi-Mumbai Expressway will pass through Delhi, Haryana, Rajasthan, MP, Gujarat and Maharashtra, while the Yamuna Expressway is a different project connecting Greater Noida to Agra. The image shared on social media does not show the interchange at Ankleshwar.

For the second image, we again performed a reverse image search on Google and found the photo on the website Planet Gujarat. This isn’t an actual picture of Sardar Bridge on Narmada but a digital image of the proposed bridge.

The photo was also shared on a website called “StrucCore” as early as 2016.

The cable bridge on Narmada in Baruch was inaugurated in 2017. Below is an image of the bridge.

Hence, an image of the Yamnuna Expressway was shared to show the developments made in the Delhi-Mumbai Expressway. Even the Union Minister of Road Transport and Highways misidentified the interchange.