Peso loses ground vs US dollar 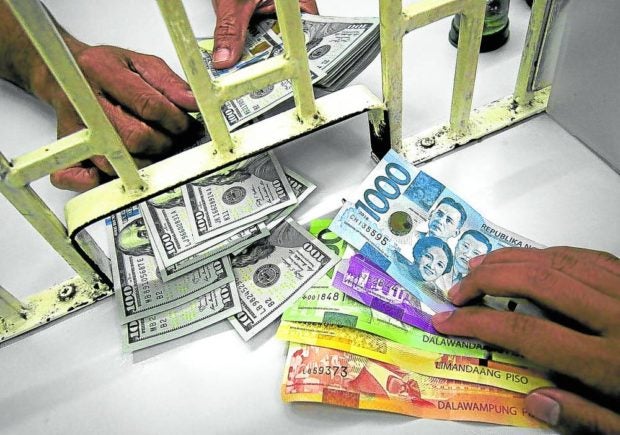 The Philippine peso continued to lose ground against the US dollar on Thursday, even as the Monetary Board (MB) again jacked up the policy rate to address the expected further quickening of inflation.

This was the ninth straight trading day that the peso depreciated, starting at 55.20:$1 on Aug. 5.

The MB raised the Bangko Sentral ng Pilipinas’ overnight borrowing rate by 0.5 percentage point to 3.75 percent to address rising inflation as well as the depreciation pressures on the peso.

MB Chair and BSP Governor Felipe Medalla noted that the depreciation of the peso was an added factor in rising inflation expectations.

In their latest monthly market commentary, First Metro-UA&P Capital Markets Research said the peso may have a little respite from its recent weakness in the coming months as the seasonal peak of remittances from overseas Filipinos approaches.

However, First Metro-UA&P said the continually aggressive policy rate hikes by the United States Federal Reserve would maintain pressure on the peso.

“The external sector will remain challenged since imports may shift from oil to food while exports may respond positively to the peso depreciation only starting Q4 [in the fourth quarter],” the group said.

“Inflation will likely average 6 percent in the second semester, assuming only a minor further slide in crude oil prices and put some brakes on consumer spending,” First Metro-UA&P said.

“Sugar accounts for only one percent of the consumer price index basket of goods, but the pricey sweet stuff could also nudge up the prices for non-alcoholic beverages (which account for 3 percent of the CPI) and restaurants (9.5 percent of CPI),” Mapa said.

Data from the Philippine Statistics Authority (PSA) show that the growth rate of prices in the “sugar, confectionery and desserts” basket, which include refined sugar, kicked up 17.6 percent in July.

The PSA said this sub-basket was among the biggest contributors—along with the sub-groups of meat and fish —to inflation in food and non-alcoholic beverages in July.

Inflation for the sweets basket has been rising month after month since January when it was pegged at 2.8 percent.