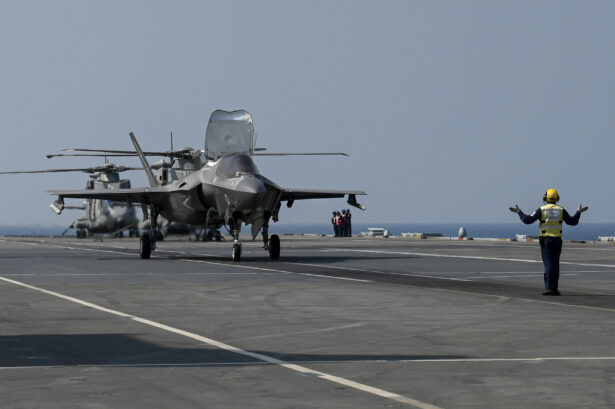 The Pentagon said on Sept 7 that it has halted deliveries of fifth-generation F-35 fighter jets after a component used in the plane’s engine was found to be sourced from China.

U.S. Defense giant Lockheed Martin, the company making the F-35s, said the component is a magnet on the plane’s turbomachine pumps manufactured by U.S. aerospace parts maker Honeywell International. The defense company added that the magnet was made with a cobalt and samarium alloy that originated from China.

A turbomachine is a part of what Lockheed Martin calls the F-35 aircraft’s “integrated power package,” which provides electrical power to start the plane’s engine.

On Sept. 7, Russell Goemaere, spokesperson of the F-35 Lightning II Joint Program Office (JPO), a Pentagon agency, told news outlets in a statement that the office became aware of the alloy’s origin last month, and the issue “is potentially in non-compliance” with federal defense acquisition regulations.

Not Resulted in Security Risks

However, Goemaere said the magnet in question has not resulted in any security risks.

“We have confirmed that the magnet does not transmit information or harm the integrity of the aircraft, and there are no performance, quality, safety, or security risks associated with this issue, and flight operations for the F-35 in-service fleet will continue as normal,” Goemaere said.

“Once the issue was discovered,” the F-35 JPO “found an alternative source for the alloy that will be used in future turbomachine,” Goemaere continued.

Goemaere added, “Further investigation is underway to understand the causal factors for the non-compliance and to establish corrective action.”

Lockheed Martin and Honeywell have each provided a statement to Politico.

“We are working with our partners and DoD to ensure contractual compliance within the supply chain,” Lockheed Martin spokesperson Laura Siebert said. “The F-35 remains safe for flight, and we are working with the DoD to resolve the issue as quickly as possible to resume deliveries.”

“We are working closely with DOD and Lockheed Martin to ensure that we continue to achieve those commitments on products Honeywell supplies for use on the F-35,” Honeywell spokesperson Adam Kress said.

The U.S. Government Accounting Office said in April the U.S. Air Force, Navy, and Marine Corps have 450 F-35 fighter jets, and the Pentagon plans to buy 2,500 in total.

Responding to the Pentagon’s decision, Anders Corr, principal at the New York-based political consultancy firm Corr Analytics, took to Twitter to say the United States should decouple from China.

“The U.S. discovered a Chinese magnet in the F-35 engine and is removing it,” Corr wrote while tagging the NATO. “Now if only our leaders realize that our economies are just as critical as our F-35s to collective defense from China, we can all proceed with economic decoupling.”

Corr made a similar call in May, after Secretary of State Antony Blinken said the United States won’t decouple from China and the two nations “have to deal with each other for the foreseeable future,” in a speech outlining the Biden administration’s China strategy.

“In fact, we can increasingly decouple from China, if we make that choice,” Corr wrote in response to Blinken’s speech. “And, moving towards that choice gradually gives us more bargaining leverage with Beijing.”

Since the start of the U.S.-China trade war, the concept of decoupling, or separation between certain sectors of the U.S. and Chinese economies, has become a much-talked-about option for the United States.

Companies dependent on Chinese supply chains are vulnerable to the Chinese regime’s influence. The Chinese Communist Party is also known for carrying out espionage activities, stealing intellectual property and trade secrets from companies and institutions.

Former President Donald Trump raised the idea of decoupling from China during his presidency. Some Republican lawmakers have also made the same call.

‘China Has Been a Predatory Investor’

Recently, Sen. Kevin Cramer (R-N.D.), in an interview on the “Capitol Report” program on NTD in July,  said, “we ought to find ways to decouple ourselves from China, not find more ways to bring them in, particularly with investments our country.”

“China has been a predatory investor for a long time,” Cramer continued. “They’ve demonstrated a willingness to use economic enticement to gain access to very important assets.”

Cramer added, “We can’t just simply be addicted to [China’s] cheap stuff as an economic strategy because at the end of the day, it ends up costing more than you gain.”

Who is Adar in ‘The Lord of the Rings: The Rings of Power’?