Over 10,000 MrBeast fans showed up to buy a burger. We asked them why. 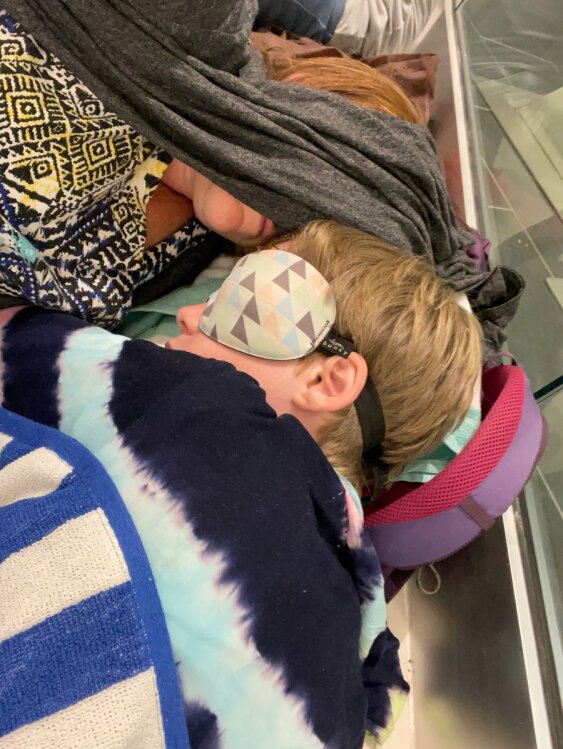 On Sunday, Aug. 4, at the shiny, new American Dream mall in New Jersey, an estimated 10,000 people showed up for the opening of the first physical MrBeast Burger location. Since its 2020 debut, the fast food service has operated solely out of ghost kitchens across the country. It’s been wildly successful thanks to the YouTuber’s knack for marketing via money-guzzling (though often philanthropic) stunts. But the Burgers aren’t the draw; MrBeast is.

So when MrBeast, otherwise known as Jimmy Donaldson, announced he’d be at the opening of his restaurant’s first IRL eatery, he expected there’d be a crowd.

Wonka bars and ghost kitchens: How food became the next frontier for YouTubers

Donaldson’s planned appearance — and the added attendance of his crew of massively popular co-stars and Twitch streamers Karl Jacobs, Sapnap, Punz, and Nolan Hansen — brought people from all over the state. Six attendees told Mashable what it was like to wait for hours and, in some cases, overnight in the mall to catch a glimpse of MrBeast.

I heard about the event because my mom saw it on Twitter. MrBeast is cool, and I like the MrBeast burger and thought it would be a fun adventure. I thought we’d wait in line for awhile and maybe he’d have some fun things to entertain us while in line. I hoped we would get to meet him and then we’d get a burger.

We used our backpacks for pillows (not comfortable) and went to the Walgreens in the mall and bought some beach towels for a blanket and some melatonin. But it was very hard to sleep — it was loud, and there was lots of light. We probably only got two hours, tops. I also tried to use my mom as a pillow.

I decided to stay overnight because my friend and I both thought it’d be fun, and my mom let us decide (I don’t think she really wanted to sleep on a floor, though). I got really tired and wanted to sleep but it wasn’t comfortable. Some people around us did go home and come back so it would have been OK if we did. But the security people made it seem like it might be really hard to get back to our spot in line (it wasn’t really — but I guess we would have missed the adventure if we went home).

I don’t know if I feel like it was worth it. Maybe. It was fun. I got to meet MrBeast and Nolan and could tell my friends about that. I even got my picture with them both. It was pretty cool. It wasn’t that comfortable and waiting in line forever wasn’t fun. I wish there was more stuff for us to do while we waited in line.

Henry and mom Melissa try to get some shut eye under the fluorescent lights of the mall.
Credit: @MamaMelNYC

I like MrBeast because he gives away lots of money and makes lots of high quality videos and he seems really nice and fun. Even though I only met him for a couple seconds he gave me a high five and said he was sad that he couldn’t talk to everyone more.

I enjoy how much Henry likes MrBeast because it has made my son think more philanthropically. He likes how much he gives away to people and has said if he ever made money, he’d want to help others like MrBeast. Also, he did really seem sincere about wishing he could talk to all of his fans on Sunday (and seemed really overwhelmed by the huge number of people there!).

I heard about the event from Karl Jacobs’s stream on Friday. I thought, I have Labor Day off from classes, I have my own car, and it’s less than an hour away. On Saturday, I originally went to scope things out for the next morning, but I saw a couple hundred people already there and decided well, might as well get comfy!

I arrived at around 7:30 p.m., stayed overnight, and got into the actual restaurant at around 12:30 p.m. on Sunday. I was 438th in line. Afterwards, I hung out and met creators outside of the event and left at around 5 p.m. on Sunday.

I honestly didn’t expect too much. I thought that it would be worth it if I even had a chance to meet some of the people that mean a lot to me and, even if not, maybe I could see them, or even just meet some new friends. But my expectations were blown. Security handled us well, and I got to meet those who keep me going! Sapnap, Karl, and Punz are the people who I watch the most, but also MrBeast and Nolan. Worth every second on the floor.

On Saturday, I left my house at 8:00 a.m. and got there at 9:30 a.m. I stayed on the third floor across the restaurant for about three hours before they started the challenge on stage where whoever last stepped outside the circle wins $50,000. Nolan and Sapnap were directing and announcing. Punz was outside the restaurant on the third floor for the majority of that time, and there were other creators like Astelic, Quig, and Sylvee there, but I wasn’t able to see them. I went to go check out the mall and a lot of people had the same idea I guess because they were all lined up at other food restaurants and these lines were so long they were going outside the food court. That was the case for all the food places.

I wanted one last look of the restaurant and the area had died down a bit, but there were police officers blocking the escalators. As for the people at the mall, it was a whole range of personalities. I saw pretty much every demographic and from my experience everyone was very kind. The atmosphere of the mall was overwhelming but a positive feeling. Half the stores were closed the whole day and there didn’t seem to be anyone shopping who wasn’t there for MrBeast.

I heard about the event originally from MrBeast’s tweet. I remember seeing under the tweet that Karl said he was most likely going, and MrBeast told him to “make Sapnap come along,” to which Punz had replied it would be a package deal in that situation.

My boyfriend and I ended up getting there around 9:30 a.m., and the place was absolutely packed with lines of people. The lines ended up dissipating once Sapnap, Nolan, and others from the Beast team and camera crews got on stage and ended up doing a live “try to stay in the circle” challenge! They eventually had to end it early because of the amount of people, and each player still on stage got $10,000.

I’m a very big fan of Karl, Sapnap and Punz, as well as an avid watcher of MrBeast and a fan of him and Nolan! My main goal was to try and say hi to them and get a photo. I was so excited to see them, and if we had been able to get into the restaurant or get into a competition if I had had the option, it was definitely a bonus. The burger would have been a plus, but there’s a ghost kitchen near my house so I’ve at least gotten to try it before.

I definitely felt like it was worth it! I was acknowledged by the boys more than once, which made me really happy. Karl waved at me three different times, at one point when going through the crowd with security he noticed I was wearing his merch and smiled. The boys did a ton of interacting with the crowd, taking selfies and videos and signing stuff as well as playing long distance games of “rock, paper, scissors” with random audience members. All around [it] was a super fun experience, even when just watching. Just to know they acknowledge you’re there and happy you came for them, even if it’s in a less personal way, feels nice.

My 14 year old son asked to go. I said, if we go, will it be enough for you to be there and just get a glimpse of MrBeast? I tried to explain the scope of what was going to happen and manage their expectations.

We [me, my 14-year-old and my 10-year-old daughter] actually arrived at the mall on Saturday night. We went to have dinner and check out the mall so I would know where to park and come in the next morning. When we got there, we saw that they were already over 100 people in line. I told my kids, I’d rather sleep in my own bed, but if this is important to you, I’m in. They both immediately said that they understood and wanted to stay. So we got in line, and they sent around a clipboard and took down our names. We were number 127 on the list.

I was definitely not prepared. There were people there with actual rugs, camping chairs, air mattresses. The kids slept on [mall] couches, and I stayed up all night in line. They were really troopers. No complaining. Around 6 a.m. they told us to be ready to move our lines. By 9 a.m. we were upstairs in another line waiting for the restaurant to open. We started seeing MrBeast and other YouTubers around 10:30 a.m. The first couple of fans got in at 11 a.m. We entered at 11:45 a.m, ordered, and got our food by 12:05 a.m. We bought some merchandise and then waited in line to meet MrBeast.

The whole thing was very organized overnight, but it was a mad house by the time we were leaving. There had to be around 20,000 people. I kept thinking, there is no way all these people are going to get into the restaurant, let alone even lay eyes on MrBeast. It took us over 25 minutes just to exit the mall.

But I have to say that all of the YouTubers and the staff at the mall were wonderful. I made sure to thank MrBeast and the other YouTubers for being so wonderful to their fans. I ordinarily wouldn’t want to sit on a hard floor all night long, but the look on my kids’ faces made it worthwhile. 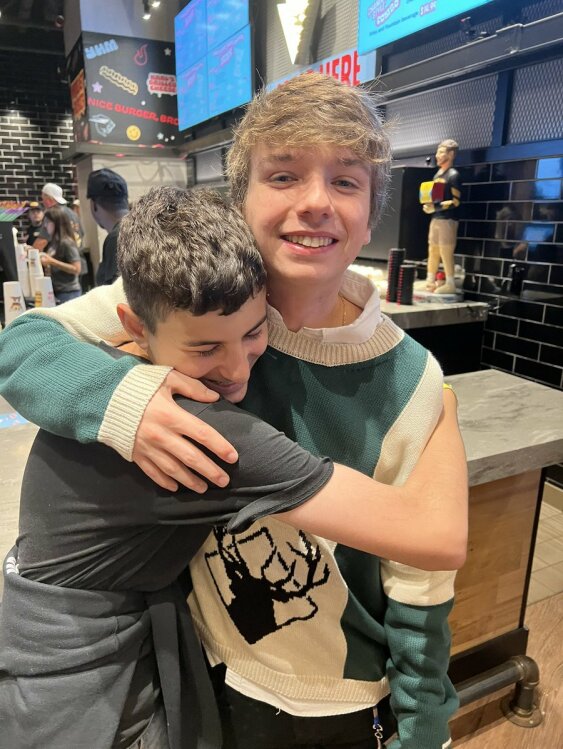 This is my son hugging some YouTuber. I don’t know his name. But the look on my son’s face was everything. Literal joy.

These interviews have been edited for length and clarity.

Brazil suspends sales of iPhones that don’t have power bricks