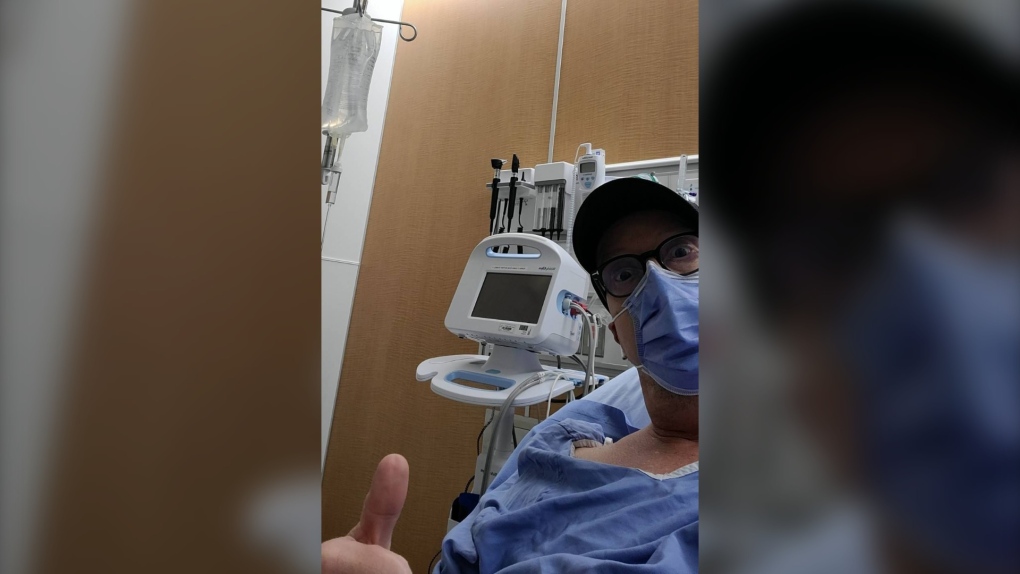 A 55-year-old man who spent nearly 24 hours waiting in an emergency room for a bed last month says Ontario’s health-care system is broken.

Dan Trivett told CTV News Toronto that he was involved in a collision in Mississauga on Oct. 26. As a result, he spent three hours at Mount Sinai Hospital for a whiplash assessment before being sent home.

However, shortly after he started making dinner, Trivett says he began experiencing an intense pain in his abdomen.

“It felt like I was being stabbed with a knife and my ribs were being crushed,” he told CTV News Toronto. “[I] pretty much blacked out sweating, tried to call my husband, couldn’t get a breath.”

The family was eventually able to call 911 and Trivett was rushed to Toronto General Hospital around 2 a.m. He said he waited on a stretcher for about two to three hours with a heart monitor on to make sure he wasn’t having a heart attack.

During those three hours, the paramedics who transported him in the ambulance stayed at his side.

Afterwards, Trivett was told to go to a rapid assessment centre, which he described as a cubicle with a recliner. He stayed there until he was admitted to the hospital around 2 a.m., nearly 24 hours he first arrived.

Throughout the experience, Trivett said there was zero privacy and he could overhear doctors speaking with other patients about their conditions.

“Everybody was being treated around me. I could hear them,” he said.

“I heard the doctor saying, ‘we’ve got to drain that’… if you’re queasy, it’s not the place you want to be.”

Dan Trivett is seen in this photograph taken while at the hospital.

Wait times in emergency rooms across Ontario reached a record high in September.

According to data by Health Quality Ontario (HQO), patients spent an average of 21.3 hours in an emergency room waiting to be admitted. This is up from 20.7 hours in August and 20.8 hours in July.

Earlier this week, the Ontario Liberals said that this September was “the worst September on record extending all the way back to 2008.”

“No matter how you look at this data, whether it month over month, or a year over a year, health-care performance is continuing its dramatic nosedive and unfortunately is now in freefall,” MPP Dr. Adil Shamji told reporters at a news conference Wednesday.

An Ontario Health report provided to executives and emergency department chiefs, and leaked by Shamji, showed there was an average of about 946 patients waiting for a hospital bed in an emergency room across the province at 8 a.m. daily that month.

“I think back to my most recent days in the emergency department when we have a day that’s particularly slammed, and patients are waiting for an inpatient bed and there isn’t one, and so they occupy acute care beds in our emergency department that are designated for new patients,” Shamji said.

“And when there aren’t spaces for new patients be assessed, managed and treated. They move into unconventional spaces.”

The report also showed ambulance offload times jumped by about 52.5 per cent in the last year, meaning patients waited on average about 90 minutes before entering a hospital in September.

This particular part of the process concerned Trivett, who watched as the same paramedics that brought him in stuck around to monitor his vitals and escort him to the bathroom.

“They couldn’t leave me unattended,” he said. “I felt bad for them because they were off the street.

“It basically meant that those two and that one ambulance was out of service for the time they were with me, which wasn’t the best situation.”

He said he also noticed a number of patients seeking care for things like respiratory illnesses who were ultimately sent home after seeing a doctor.

The Ontario government has pledged to add up to 6,000 new health-care workers as part of its plan to stabilize health care following the pandemic. They have also said they will invest in private clinic surgeries and put forward legislation that allows hospitals to transfer patients waiting for long-term care to a home not of their choosing—two ideas they hope will free up hospital beds for acute care patients.

“When you’re feeling crappy, you won’t be languishing in the ER chair,” Trivett said. “I think the worst thing for me was being in the ER and just being moved three times and hearing and seeing everything. You’ve got mental health patients, you’ve got elderly people who’ve had a stroke or heart attack, are at the end of life and with zero dignity. It’s kind of sad. The system is very broken.”