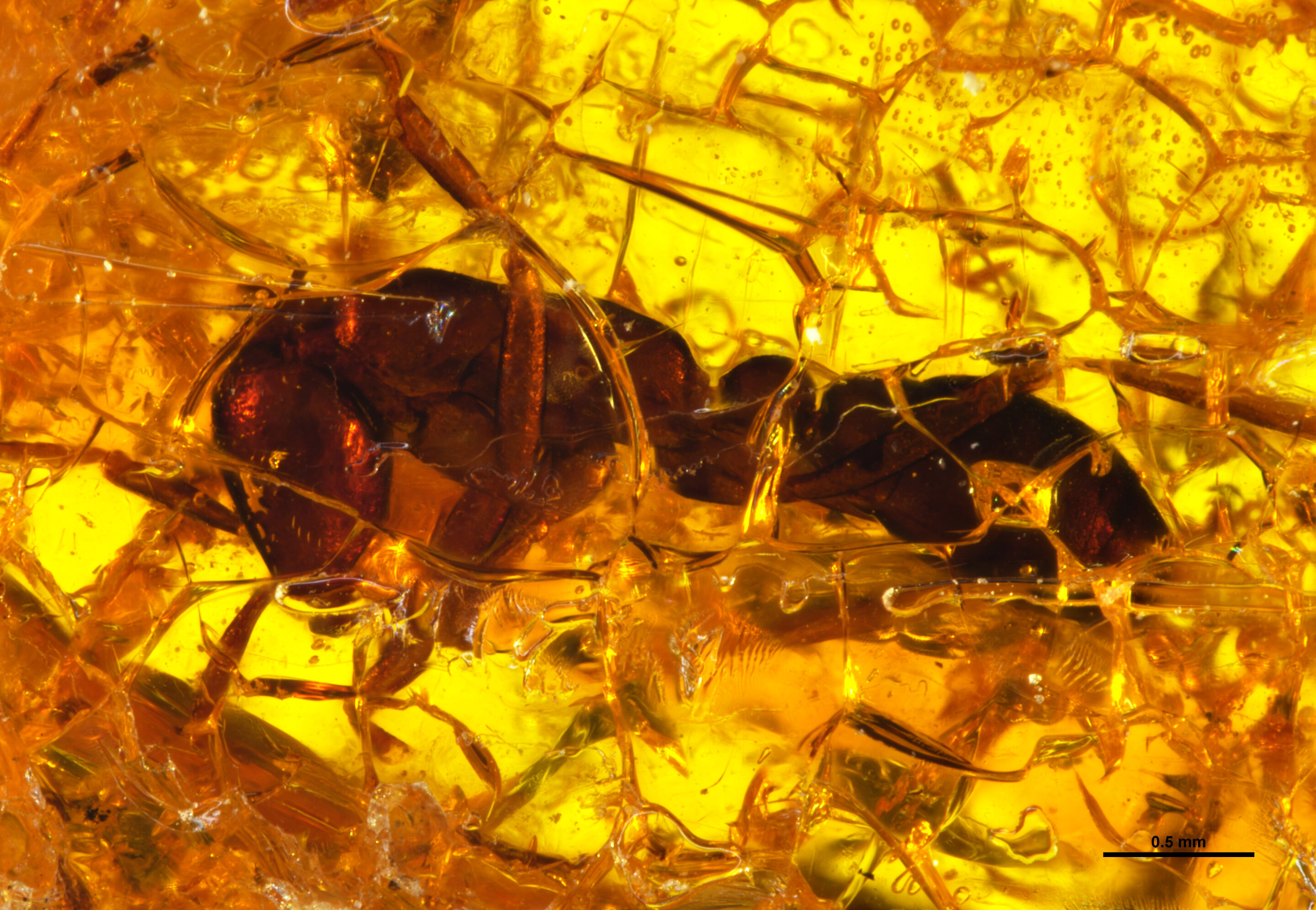 Their nomadic lifestyle and ravenous raiding have taken army ants (Dorylinae) to most continents on Earth, but a rare fossil discovery is now offering first evidence that the infamous predators once swarmed a land they are strikingly absent from today—Europe.

In the journal Biology Letters, researchers at New Jersey Institute of Technology and Colorado State University have reported the discovery of the oldest army ant on record, preserved in Baltic amber dating to the Eocene (about 35 million years ago).

The eyeless specimen Dissimulodorylus perseus (D. perseus)—named after the mythical Greek hero Perseus, who famously defeated Medusa with the limited use of sight—marks just the second fossil army ant species ever described, and the first army ant fossil recovered from the Eastern Hemisphere.

Sized at roughly 3 millimeters in length, researchers say the ant fossil brings to light previously unknown army ant lineages that would have existed across continental Europe before undergoing extinction in the past 50 million years.

Remarkably, the fossil had been kept in obscurity for nearly 100 years in the Museum of Comparative Zoology at Harvard University, before being identified by the paper’s lead author and NJIT Ph.D. candidate, Christine Sosiak.

“The museum houses hundreds of drawers full of insect fossils, but I happened to come across a tiny specimen labeled as a common type of ant while gathering data for another project,” said Sosiak. “Once I put the ant under the microscope, I immediately realized the label was inaccurate … I thought, this is something really different.”

“This amber would have been excavated around or before the 1930s, so to now learn it contained a rare army ant is surprising enough, much less one that demonstrates these ants roamed Europe,” said Phillip Barden, assistant professor of biology at NJIT and senior author of the paper. “From everything we know about army ants living today, there’s no hint of such extinct diversity. … With this fossil now out of obscurity, we’ve gained a rare paleontological porthole into the history of these unique predators.”

A paleontological porthole into a unique predator’s history

Today, there are about 270 army ant species living in the Eastern Hemisphere, and roughly 150 across North and South America.

Based on X-ray and CT-scan analysis of the fossil, the NJIT team gathered phylogenetic and morphological data that places D. perseus as a close relative to eyeless species of army ants currently found in Africa and Southern Asia, called Dorylus.

“At the time the fossil formed, Europe was hotter and wetter than it is today and may have provided an ideal habitat for ancient army ants,” said Barden. “Europe underwent several cooling cycles over tens of millions of years since the Eocene, however, which may have been inhospitable to these tropical-adapted species.”

It’s a factor Sosiak says makes this fossil and other fossil army ants a rarity. Only one definitive fossil had been recorded until now, unearthed from the Caribbean (16 ~Ma.).

“This was an incredibly lucky find. Because this ant was probably subterranean like most army ants today, it was much less likely to come into contact with tree resin that forms such fossils,” said Sosiak. “We have a very small window into the history of life on our planet, and unusual fossils such as this provide fresh insight.”

Sosiak says the anatomical traits of D. perseus—including its sharply pointed mandibles and lack of eyes—help classify the specimen as a worker ant in its colony, which would have been involved in carrying its queen’s larvae and raiding for food with soldier ants when it was alive.

“Army ant workers participate in raiding swarms, hunting other insects and even vertebrates. Because these army ants are blind, they use chemical communication to stay coordinated with one another to take down large prey,” explained Sosiak. “This worker may have strayed too far from its fellow hunters and into sticky tree resin, which eventually solidified and encased the ant as we see it today.”

Army ants’ distinct combination of behavior and traits is so unusual in the ant world that it’s warranted its own name—army ant syndrome.

In contrast with other ant lineages, army ants have wingless queens capable of laying millions of eggs a day, while their nomadic colonies temporarily occupy nests between phases of travel that take the shape of bivouacs, sometimes involving millions of ants stretching for 100 miles.

The carnivores are perhaps best known for their highly coordinated foraging that can involve consuming upwards of 500,000 prey a day.

Barden says army ant syndrome is a case of convergent evolution that would have occurred twice—once in the Neotropics and once in the Afrotropics.

“The discovery is the first physical evidence of the army ant syndrome in the Eocene, establishing that hallmarks of these specialized predators were in place even before the ancestors of certain army ants like Dorylus,” said Barden.

D. perseus will remain deposited at the Museum of Comparative Zoology at Harvard University for future study.