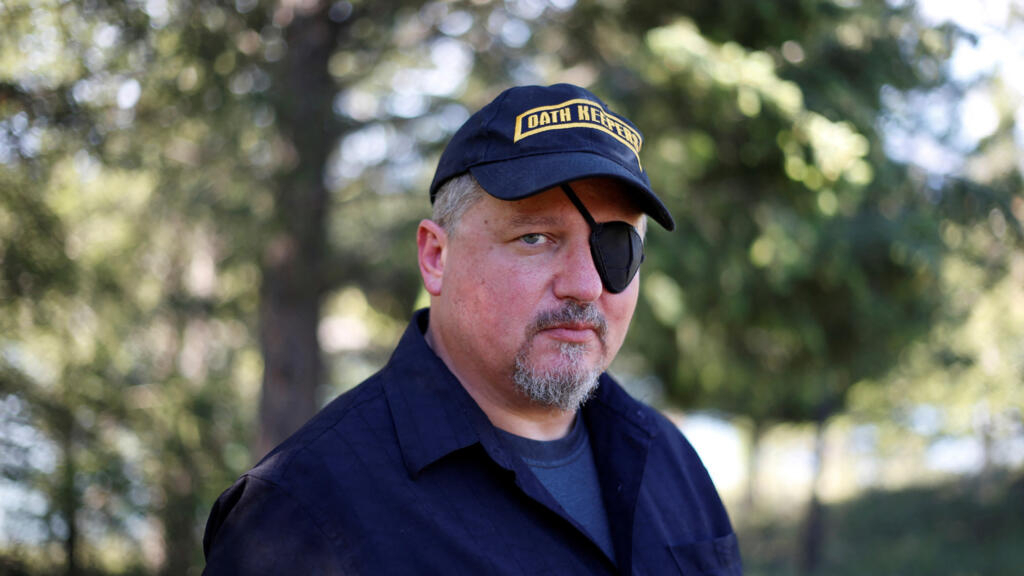 Prosecutors on Monday urged a jury to convict Oath Keepers founder Stewart Rhodes and four others for their roles in storming the US Capitol on Jan. 6, 2021, alleging they plotted to do whatever it took to prevent the transfer of presidential power.

“They concocted a plan for an armed rebellion to shatter a bedrock of American democracy,” prosecutor Jeff Nestler said on Monday in an opening statement at their trial in federal court in Washington.

In their opening statements, prosecutors portrayed Rhodes as a sophisticated leader of the far-right group who sent encrypted Signal messages to his followers after Biden won the 2020 election, saying “We must prepare for civil war.”

“It will be torches and pitchforks time if they (Congress) don’t do the right thing,” he wrote in one encrypted message sent in November 2020.

Trump supporters stormed the U.S. Capitol last January after Trump falsely claimed the election had been stolen from him through widespread fraud. Five people died during and shortly after the riot, and about 140 police were injured.

The five on trial face numerous felony charges, including seditious conspiracy – a Civil War-era statute that is rarely prosecuted and carries a statutory maximum sentence of 20 years in prison.

Prosecutors have said the defendants trained and planned for Jan. 6 and stockpiled weapons at a northern Virginia hotel outside the capital in the group’s so-called “quick reaction force” (QFR) that would be ready if called upon to transport arms into Washington.

As lawmakers met to certify Biden’s election victory, some Oath Keepers charged into the Capitol building, clad in paramilitary gear in a military-style formation.

Nestler said Watkins led a group of seven Oath Keepers toward the Senate side of the Capitol. As she stormed down the hallway with the “power of the mob with her,” Nestler said she yelled “Push, push, push!”

He said that Watkins added: “They can’t hold us.”

Ahead of Jan. 6, Meggs told followers from the Florida Oath Keepers that “the time for talk is over. The real question is who’s willing to DIE?” according to text messages shown by the prosecution.

FBI Special Agent Michael Palian testified as the government’s first witness on Monday, saying that he helped escort U.S. senators back to the Senate to finalize certifying the election once the Capitol had been cleared of rioters.

“It was chaotic,” Palian said, recounting how he had seen some lawmakers crying. “It looked like a bomb had gone off in there. There was pepper spray and tear gas everywhere.”

The government and extremist monitoring groups have characterized the Oath Keepers as a far-right anti-government group, with some of its members having ties to militias. Many of its members are current and former military and law enforcement personnel.

Rhodes, a Yale-educated attorney and former U.S. Army paratrooper, has disputed that characterisation.

Philip Linder, one of Rhodes’ attorneys, promised the jury his client, whom he described as “extremely patriotic,” would take the stand to explain his side of the story.

He said the “real evidence” in the trial will show that the defendants were in Washington on Jan. 5 and 6 to provide security to a variety of speakers at political rallies.

Watkins’ attorney, Jonathan Crisp, said his client, a transgender woman, “never felt like she fit in and a lot of things she did that day were to try to fit in, good and bad.”

Crisp said Watkins, an Army veteran and a former firefighter who ran a bar until she was detained pre-trial, regretted entering the Capitol building, but denied her intention had been to stop the transfer of power.

Caldwell’s attorney, David Fischer, stressed that his client had never attacked police, had not gone inside the Capitol building and had fully cooperated with the FBI.

Caldwell is accused of coordinating the Oath Keepers’ “quick reaction force” (QRF) – the armed contingent of the group that stayed inside a Virginia hotel room stockpiled with weapons across the river from the Capitol during the Jan. 6 attack, in what prosecutors say was part of the alleged plot.

But “a QRF by definition would not be used to attack anything, including the U.S. Capitol” and was only meant to be activated in the event of an emergency, Fischer said.

Virat Kohli gets a stylish haircut ahead of T20 World Cup

Sally Field Picked Her Worst On-Screen Kiss: ‘It Was…

The benefits of bones – Daily News

Redefining Romance for the Virtual Age

PC shipments in the US dipped 12% in Q3 despite attractive…