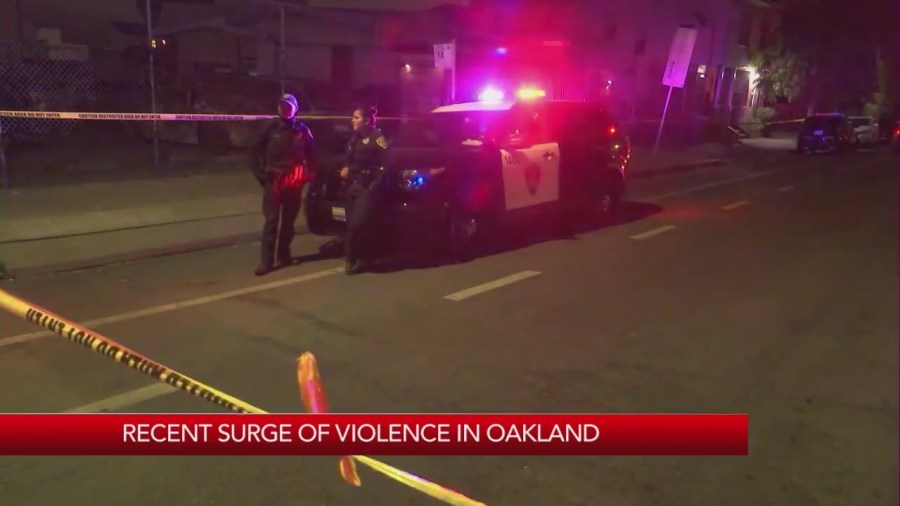 OAKLAND, Calif. (KRON) – Another violent weekend has occurred in the city of Oakland.

Since Friday afternoon there have been two deadly shootings in west Oakland and a man was shot on BART. “We’ve had so much bad news about all the shootings and killing in our city but unfortunately it’s not surprising,” said Carl Chan, President of the Oakland Chinatown Chamber of Commerce.

In less than 24 hours, four men were killed in west Oakland. Three men in a Friday night shooting and car crash on Martin Luther King Jr. Way and 27th Street.

One man was killed Saturday morning on Sycamore Street and Northgate Avenue. “We’ve seen dispensaries that have been robbed, we’ve seen smash and grabs, we’ve seen strong armed robberies. We’ve seen sideshows. We’ve seen so much going on in Oakland that the lawlessness is just out of hand,” said Nate Miley, Alameda County Supervisor.

Friday afternoon a man was rushed to the hospital after he was shot on a BART train near the Fruitvale station. Nate Miley said the Oakland City Council needs to do more.

“I don’t think the city leadership is meeting this moment. Just because it doesn’t seem to be diminishing, it seems to be increasing,” said Miley. Carl Chan said he agrees with Miley that the city council needs to do something.

“We cannot always focus on the problems. We have to start focusing more on the solutions,” said Chan. “So, I think what we need to do is going to be working with other police departments. Currently we just wrote a letter asking the asking the Alameda County Sheriff’s Department to deploy additional officers in the area,” added Chan.

The most recent Oakland Police data showed violent crime is down 11 percent compared to 2021 but Chan said numbers can be deceiving. “Let’s say crime went up a few hundred percent. And then the next year they say it’s down by 15% remember it is still high up,” said Chan.

Chan said crime has been at an extremely high level for many years and small improvements are not enough to bring it down to a manageable level. He said the police department is still significantly understaffed leaving the people of Oakland in danger.

Miley is calling on the city council to hold an emergency public safety meeting and he wants to be a part of it.

Pratik Sehajpal In A Surprising Twist Matches Tejasswi Prakash’s Salary Per Episode, Here’s How Much He’s Getting!