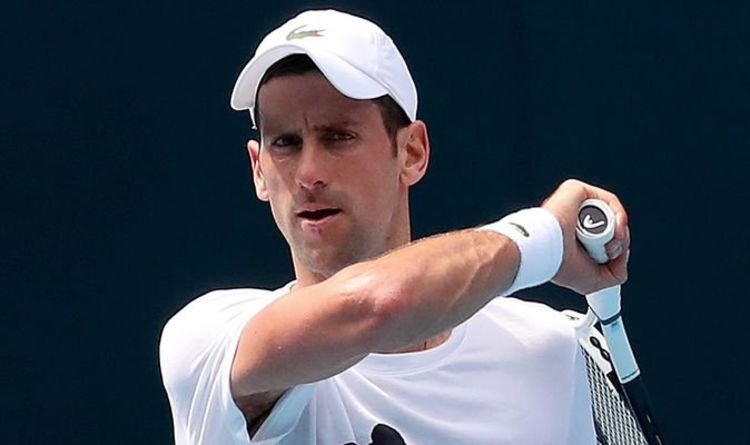 At least Novak Djokovic will now no longer be best remembered for getting disqualified from the 2020 US Open for hitting a line judge with a ball. Yesterday the world No 1, who arrived Down Under seeking to be hailed as the men’s Greatest Of All Time (GOAT), was instead branded “an icon for anti-vax groups” before being bundled on a plane back out of Australia.

The Serbian’s sheer bloody-mindedness has brought him level on 20 Grand Slams with Roger Federer and Rafa Nadal.

Yet like in his New York default, where he certainly was a danger to public health, his recklessness has again cost him the chance to claim another major title.

And who knows how many more he will get to reach the male record of 21?

Even if he is not banned from returning to Australia, will he want to come back? And will he be able to if he still has not been vaccinated against Covid?

Djokovic showed his mental strength by returning to win his next tournament after his US Open disqualification at the Rome Masters in 2020 and then reached the French Open final. Last season he was only one win away from a historic Calendar Slam.

Now Nadal, the sole former champion left in the Melbourne field, is the only man in the running to get to 21 on January 30. Or Daniil Medvedev or Alex Zverev could end his record-breaking reign as world No 1 by lifting the Norman Brooks Challenge Cup.

Djokovic’s Australian nightmare, which lasted for 11 rollercoaster days, might not be over yet. But his legacy will always be tainted.

Eurosport tennis expert Mats Wilander said: “I cannot imagine the state of mind Novak must be in right now plus it’s by far his most favourite tournament – one he has won nine times – he’s chasing 21 Grand Slams and this was his big chance to go ahead of Roger and Rafa.

“To me, now there is a good chance all three will end up on 20 Grand Slams which will be amazing. I think players think they can beat Novak. But at the same time, you know he is a warrior.

“He is going to go home, practice, and he’s going to work out and get ready for the hard courts. The big question is whether he is going to be able to travel around the world?”

And not the Australian government for playing up to the opinion polls in election year and locking up the world No 1 in a detention hotel for five nights – including Saturday – before his eviction.

All the action on the day before the first Grand Slam of the season was across the CBD from Melbourne Park in the Australian Federal Court. The judicial review to overturn immigration minister Alex Hawke’s decision to cancel the Serbian’s second visa was not deemed “irrational or legally unreasonable”.

The extraordinary justification was Djokovic’s continued presence in the country would encourage people to avoid vaccinations, even if he has avoided discussing the subject since the start of the pandemic.

Australian Government QC Stephen Lloyd claimed: “Djokovic has made a choice not to be vaccinated. That choice made clear his view about Covid vaccination. He has now become an icon for the anti-vaccination groups.”