Not even Nvidia’s 4090 Founders Edition is safe from melting 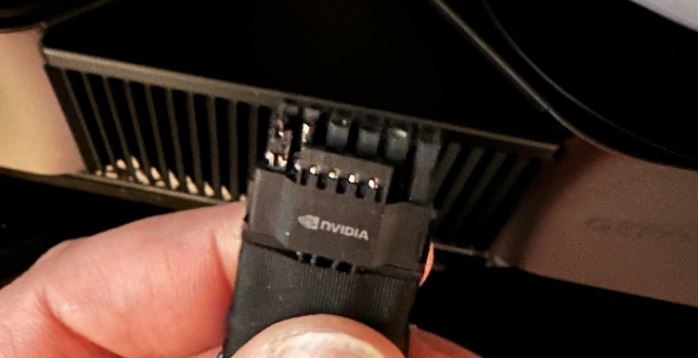 We’ve just had our first report of the connector on a Founders Edition RTX 4090 melting. If there was ever a small sliver of hope that Nvidia’s own FE graphics cards would be safe from the melting problem, that hope is all gone now.

The cases of RTX 4090 meltdowns are starting to pile up, and yet, there has been no official word from Nvidia. Here’s what we know about the latest report.

The grim news emerged on Reddit as an unlucky RTX 4090 owner shared their experience with the card. The RTX 4090 Founders Edition GPU was purchased from Best Buy on October 19 and it only lasted for 10 days before things went south.

The GPU was installed inside an Asus ROG Helios case, but with the side glass panel removed in order to avoid bending the adapter, and the user connected three power cables from an Asus ROG Thor 1200-watt power supply. Everything seemed to be just fine for a while.

The GPU was used every day after installation, but it wasn’t used for anything that strenuous, especially if you consider how powerful the RTX 4090 is in the first place. The Redditor reports that they played around two to three hours of Call of Duty: Warzone every day until October 29, when suddenly, their screen went pitch black. Multiple restarts didn’t help, and upon closer inspection, the user found that their 16-pin power adapter, as well as the power connector on the FE RTX 4090, had both melted.

To Nvidia’s credit, the card was quickly replaced after the Redditor sent it in; they received a new GPU three days later. However, they’re reluctant to use it until Nvidia makes an official statement about the problem, which it hasn’t done so far. The only official word we’ve had from Nvidia said that the case is under investigation. Meanwhile, many tech gurus are trying to crack the problem, with varying success.

This particular case is interesting not just because it’s a Founders Edition model, but also because the user went out of their way to avoid bending the adapter, which is generally believed to be the culprit of the meltdowns. Corsair’s power supply expert Jonny Guru also believes that user error is to blame and the meltdowns only happen if the cable is not plugged in properly. Meanwhile, Igor’s Lab found out that there are two cable manufacturers, and cables made by one of them seem to be more prone to melting.

With the RTX 4080 having been released today, we may soon start hearing about new cases that affect the latest GPU. Mind you, the RTX 4090 has been out for a month and only around 30 cases have been reported online, so it’s a small number — but it’s unfortunate that we still don’t know what exactly is going on, three weeks after the first report.

‘We the People’ at heart of White House holiday decorations

Visually striking science experiments at school can be fun,…