No, none of the women throwing objects at kids in viral video is Queen Elizabeth II 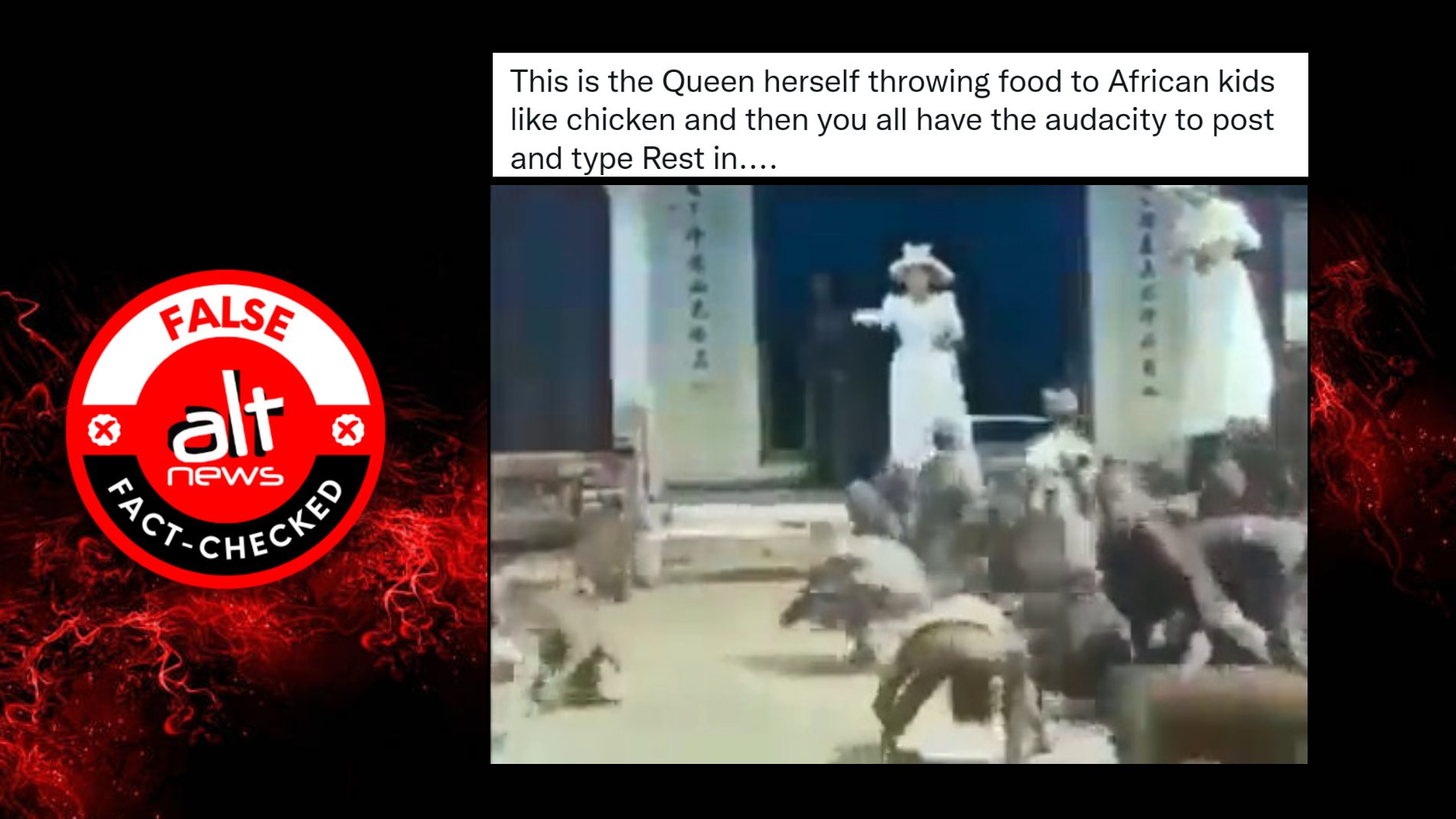 An old video that shows two women throwing objects at children who run around trying to catch them is going viral with the claim that one of the women seen in the video is Queen Elizabeth II. The video has gone viral after the news of the Queen’s death broke.

@frankie_dux tweeted this video with the caption, “This is the Queen herself throwing food to African kids like chicken..” (Archived link). His tweet gained 114.1K views. The caption, however, does not specify which country in Africa the video was shot.

This is the Queen herself throwing food to African kids like chicken and then you all have the audacity to post and type Rest in….#BlackTwitter#QueenElisabeth #LondonBridgeIsDown|Odingas pic.twitter.com/nHCtYGA44g

The video is also viral on Facebook with the same claim.

Upon reverse image searching key-frames of the viral video, Alt News found the black and white version of the same video on YouTube, titled “Lumière: Enfants annamites ramassant des sapèques devant la pagode des dames (1900)” (Translation: “Lumière: Annamese children picking up coins in front of the Ladies’ Pagoda (1900)”) posted by iconauta in November 2021. The description of the video reads, “Some ladies throw coins to some kids who run to get them. This is a scene filmed by Gabriel Veyre in Annam in Vietnam, at the time of French Indochina”. The description also states that it is movie number 1274 in the Catalogue Lumière.

According to its website, “Catalogue Lumière” lists the films by Lumière company, published between 1895 and 1905. The historical data comes from the publication “La production cinematographic des Frères Lumière”. Movie No. 1274 of this catalogue is indeed, “Enfants annamites ramassant des sapèques devant la pagode des dames” by Gabriel Veyre. According to the synopsis of the movie on this site, the two women seen in the video are Madame Paul Doumer and her daughter who are throwing money (of very little value) at the native children in Vietnam. Madam Paul Doumer’s husband was the President of France from 13 June 1931 until his assassination on 7 May 1932.

The IMDb page of the video has the following synopsis: “Black and white film where two ladies in white throw coins to poor kids. Filmed in Vietnam”.

It must be noted that the viral video was a coloured version of the original film. There have been several attempts at colourizing this particular film, one of which has been attached below.

Hence, it is evident that a video of two women throwing objects at children has been circulating on social media with the false claim that one of the women seen in it is Queen Elizabeth II. In reality, the video, titled ‘Enfants annamites ramassant des sapèques devant la Pagode des Dames”, was filmed by Gabriel Veyre in 1900, more than two decades before Queen Elizabeth II was born in 1926. The two women seen in the picture are Madame Paul Doumer and her daughter. Moreover, the captions claiming that the kids in the video are ‘African children’ are also misleading.