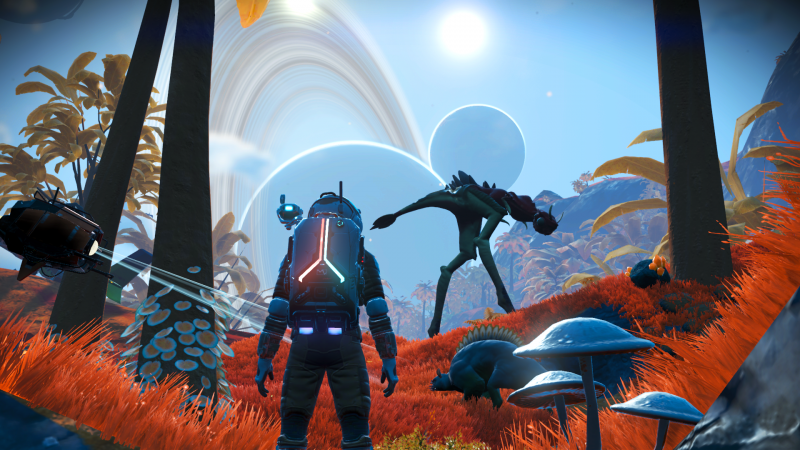 No Man’s Sky creator Hello Games has teamed up with Bandai Namco to bring its hit survival title to the Nintendo Switch. We knew from a Nintendo Direct that aired earlier this year the game was coming to the portable console before today’s announcement. However, the last mention of the project came with a summer release window, which has now been pushed back. But vague time frames are a thing of the past, No Man’s Sky is officially coming to the Switch October 7.

Fans all over the world can pick up either a physical or digital copy of the game come October. In addition to the Nintendo console launch, PlayStation 5 owners will be able to buy a physical remastered edition on the same date. The remaster will come with all the previously released content included, which when tallied up means new-gen PlayStation owners will have access to 20 different updates in total.

Looking over the titles’s long history and its new leap onto the Switch, Hello Games founder Sean Murray observed the following.

No Man’s Sky on this tiny portable device feels both completely natural and also totally improbable at the same time. This has been a real moonshot for our small team. No Man’s Sky is built around procedural generation, which means the console generates everything you see. This makes it so much harder to bring our game to something like the Switch, but I think this team never seems happier than when they are trying to do near-impossible things.

The PlayStation 5 physical version will include a remastered disc containing all 20 updates, and is a great place for people to jump into the game. This is the first time since the Beyond launch in 2019 that you could buy a copy of No Man’s Sky in the shops. The box of that version boasted “Contains All 7 major updates”. The fact that we are just about to hit our 20th free update is a reminder of how busy we’ve been in the last 3 years!

No Man’s Sky’s Switch and PS5 remastered editions are set to release on October 7, but you can also purchase a copy of the game on all major platforms.