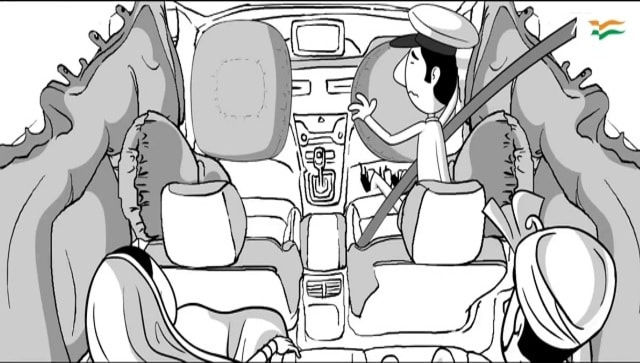 The Centre had proposed to mandate six airbags in all cars from 1 October, 2022, but a final decision is pending amid discussions within the government on its fallout in the small-car market and a pushback from industry

Screen-grab from the one-minute video posted by Minister for Road Transport & Highways Nitin Gadkari showing how the six airbags will be deployed in case of an accident. Twitter/ @nitin_gadkari

New Delhi: Only two days after the Centre made wearing seat belts in the rear seat compulsory and imposed fine for its violation, Minister for Road Transport & Highways, Nitin Gadkari, took to Twitter to share a video highlighting the importance of cars having six airbags.

The one-minute video shows a tearful man bidding farewell to his newly-wed daughter and son-in-law. Actor Akshay Kumar, who acts as policeman here, asks the father that if he sends her off in such a car then he should certainly cry. The father of the bride then goes on to list the features of his high-end car. On being asked about airbags, he says two. The promotional video then ends with the father changing the car and sending the couple in a car with six airbags.

Current rules with regard to airbags

Dual airbags (driver and passenger) was made mandatory for all vehicles this January. A driver airbag was made compulsory for all passenger vehicles since 1 July, 2017. Earlier, the Centre had proposed to mandate six airbags across all cars from 1 October, 2022, but a final decision is pending amid discussions within the government on its fallout in the small-car market and a pushback from industry, reports Indian Express.

In February a proposal to make six airbags compulsory was floated. “The Ministry of Road and Transport and Highways, vide GSR 16(E) dated 14th January, 2022, has notified that vehicles of category M1, manufactured after 1st October 2022, shall be fitted with two side/side torso air bags, one each for the persons occupying front row outboard seating positions and two side curtain/tube air bags, one each for the persons occupying outboard seating positions. This has been notified to enhance safety for the vehicle occupants,” reads the proposal.

Category M1 vehicles include carriage of passengers, comprising not more than eight seats in addition to the driver’s seat.

Why is this important

According to National Crime Records Bureau (NCRB) data, over 1.55 lakh lives were lost in road crashes across India in 2021, which is the highest death figures recorded in any calendar year so far.

According to the report titled, ‘Road accidents in India — 2020’, more than 11 per cent of deaths and injuries were caused due to non-usage of seat belts.

Last year, Gadkari in an interview said mostly, lower middle-class people buy small economy cars and “if their car won’t have airbags and when accidents happen, then it may result in deaths. So, I appeal to all car manufacturers to provide a minimum of six airbags across all variants and segments of the vehicle,” he had said, reports Hindu Businessline.

Road safety was pushed into the limelight after business tycoon and former CEO of Tata Sons Cyrus Mistry died in a car crash while on his way to Mumbai on 4 September. He was not wearing seatbelts.

Mistry was returning from Gujarat’s Udwada to Mumbai with three family friends – brothers Darius and Jehangir Pandole and Darius’s wife Anahita Pandole, who was behind the wheel. The car was reportedly speeding and trying to overtake from the wrong side (the left) when it crashed into a divider at Surya River’s Charoti bridge on the Mumbai-Ahmedabad National Highway.

The Mercedes-Benz GLC 220d 4MATIC, the SUV Mistry was riding in, comes with seven airbags overall. There are no front-facing airbags for rear passengers in the car and just curtain airbags on the sides, reports PTI. Just like any other car, the airbags are the “supplementary restraint system”. The primary restraint system on cars remains the seat belt.

It was following this and the NCRB data on road accidents that the Centre has taken up the campaign of road safety with renewed vigour.

The government is planning to make it mandatory for automakers to introduce a seat belt alarm system for rear seats also, Gadkari said during an event.

Presently, it is mandatory for all vehicle manufacturers to provide seat belt reminders only for front-seat passengers.

With input from agencies

Cyrus Mistry’s death: How the rules on seat belts, airbags will be amended?

Remedy Place: The Fashionable Social Wellness Club Where You Can Bring All Your Friends

Here is how to create multiple UPI IDs in Google Pay