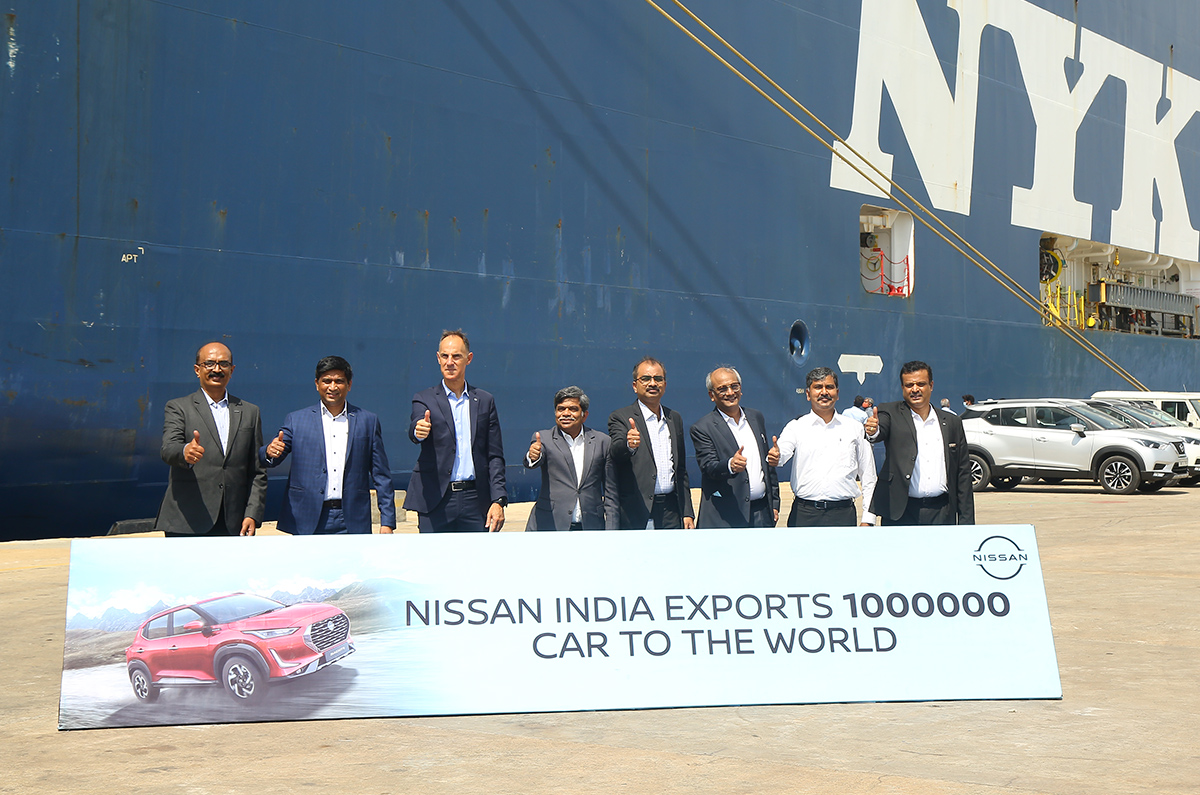 The Japanese manufacturer currently exports its Chennai-built cars to 108 countries.

Nissan India has hit the milestone of exporting one million vehicles from its plant in Chennai. The Japanese manufacturer has been exporting its cars to 108 countries from India, with the Magnite SUV being the one millionth vehicle to be flagged off.

Nissan began its export programme on a strong note in 2010 with the Micra hatchback, and within three short years, it had dispatched 3,00,000 units. A little less than four years after that, on February 28, 2017, the 7,00,000th car was dispatched abroad. By this point, the Micra was Nissan’s highest exported model out of India, followed by the Sunny, Datsun Go, Datsun Go+ and the Datsun Redigo. In April this year, Nissan pulled the plug on the Datsun brand in India, which was one of its last markets where it remained operational.

The brand witnessed a sharp decline in exports in 2018, most likely because the new Micra’s production was shifted to Europe. The Micra, along with the Sunny and Terrano, were discontinued in India in 2020 after BS6 norms were introduced. Nissan’s exports slowly seem to be on the rise again with a total of 39,005 units in exports in FY2022 (compared to 32,390 units exported in FY2021). In the first quarter of FY2023 (April-June’22), the brand has shipped over 11,000 units.

In recent years, Nissan India has transitioned its primary export base from Europe to many Middle Eastern countries.

Commenting on the milestone, Rakesh Srivastava, managing director, Nissan Motor India, said, “Exports are a strong pillar of Nissan India’s business strategy. The Nissan Magnite has validated our business approach, and its success in markets in India and overseas has established it as a key driver of the Nissan NEXT transformation plan.”

About the Nissan Magnite

First launched in December 2020, the Magnite has been instrumental in driving the sales for the brand. Exports for the Magnite first began in June 2021, when the compact SUV only went out to markets like Indonesia, South Africa and Nepal. In March 2022, the 50,000th Magnite was rolled out of the Oragadam plant in Chennai, which is currently sold in over 15 global markets.

At a starting price of Rs 5.97 lakh (ex-showroom, India), the SUV is offered with a 72hp, 1.0-litre NA petrol engine and 100hp, 1.0-litre turbo petrol unit. Both engines are mated to a 5-speed manual gearbox, whereas the CVT automatic transmission is only offered with the turbo petrol version. The compact SUV also scored a four-star Global NCAP safety rating alongside its sibling, the Renault Kiger.