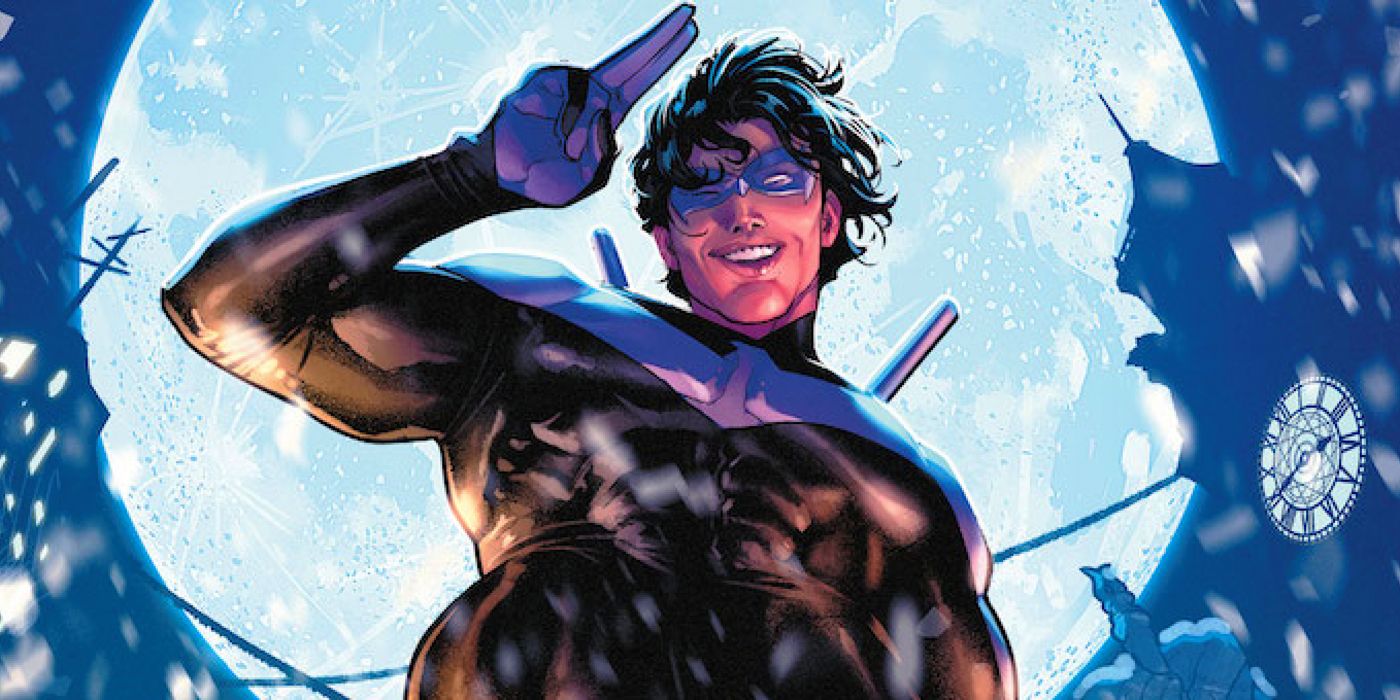 Dick Grayson dons a trendy leather biker’s jacker on top of his usual black and blue body armor in the latest issue of his solo series.

The following contains spoilers from Nightwing #93, on sale now from DC.

Dick Grayson gets a subtle costume upgrade in Nightwing #93 — a slick leather jacket that goes on top of his normal blue and black suit.

The former Boy Wonder pulls the jacket on as he runs from a group of corrupt Blüdhaven police and hops on his motorcycle to elude oncoming patrol cars. The jacket sports the same blue highlights along the arms as Nightwing’s normal outfit, and it perfectly connects with Dick’s chest emblem to form one continuous bluebird symbol.

RELATED: DC’s Original Sidekicks Are In Denial – And That Has Consequences

Dick’s escape from the cops takes his cycle off of a freeway overpass. Thanks to a grapple in his bike — as well as the additional padding that his new jacket offers — Dick survives the subsequent fall and makes it safely to Barbara Gordon’s hideout.

While there’s no indication that Dick will continue to wear a jacket over his usual gear when he’s not piloting a motorcycle, this is not the first time that Nightwing has donned extra leather gear. Notably, in Sean Gordon Murphy’s White Knight series of Batman stories — which take place in a separate universe unconnected with mainstream DC continuity — Dick Grayson sports a jacket with blue highlights over his costume in a stylish design similar to his appearance in Nightwing #93.

In regular continuity, Dick has also briefly worn an unadored brown leather jacket over his suit on multiple occasions, most recently in Nightwing #84. The character’s design in the upcoming Gotham Knights video game by Warner Bros. Montreal also features a tactical vest that appears vaguely like a jacket, in contrast to Dick’s more traditional skintight jumpsuit appearance in the comics.

Dick’s new duds come as the Boy Wonder has his hands full trying to turn Blüdhaven into a better city, figuring out his relationship boundaries with his on-again, off-again flame Barbara Gordon and grappling with the knowledge that he has a half-sister in Melinda Zucco, current Blüdhaven mayor. Nightwing can also be seen in the current mega-event embroiling the DC universe, Dark Crisis. Set during a slightly different time as the adventures in his solo series, Nightwing’s Dark Crisis appearance shows him training the next generation of Titans, leading the charge against an invading army of villains led by Deathstroke and dealing with the fallout from the presumed death of the Justice League.

Dog left in crate at Pearson airport for 21 hours