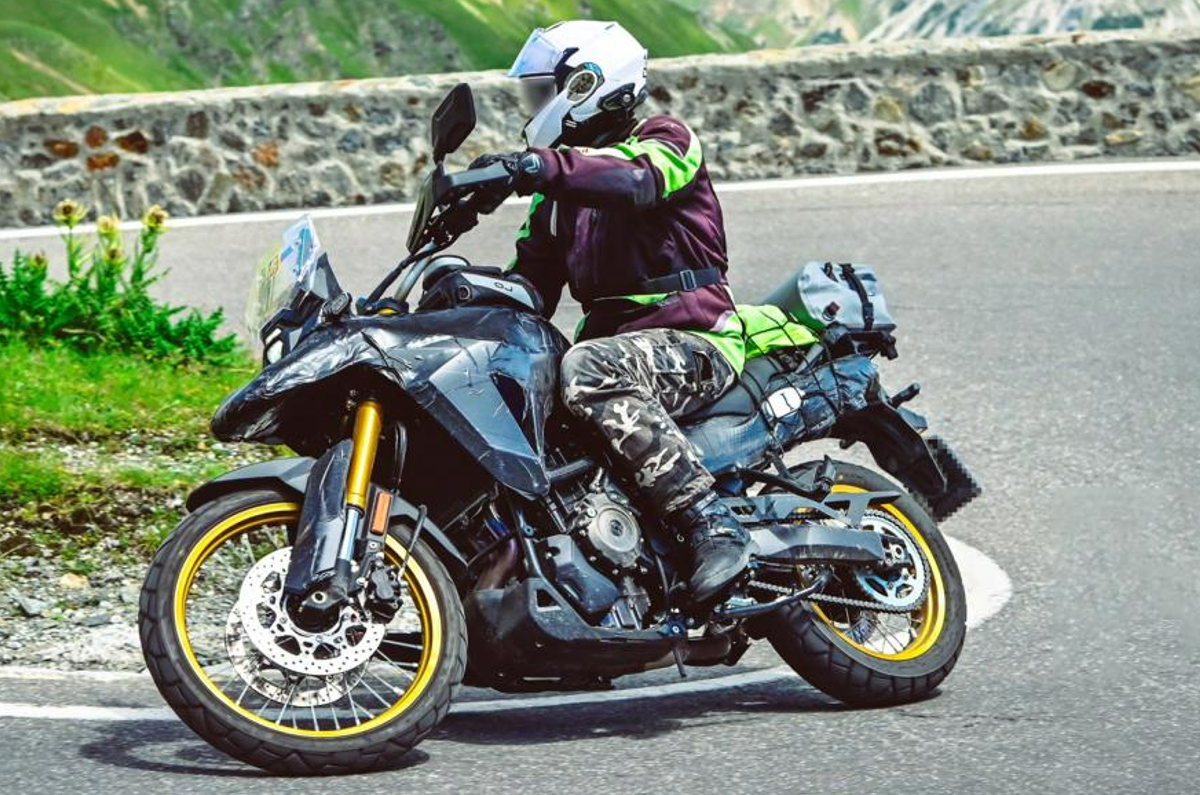 A new adventure tourer from Suzuki, sporting a parallel-twin engine, has been spied testing overseas. This new machine marks the first all-new engine and chassis platform from the Japanese company in nearly five years, the previous one being the 2017 GSX-R1000.

Based on the boxy headlamp and jagged side panels clearly visible, this upcoming bike appears to have borrowed styling elements from the Katana and V-Strom 1050.

This bike has been spotted with an all-new parallel-twin engine, which is a sharp departure from the V-Twin configuration on the current model. Back in 2021, Suzuki had filed a patent for a 700cc parallel-twin engine and there is a good chance that this new model will debut the said engine.

While displacement and output figures are not known, it is unlikely to see major changes in this area. It also remains to be seen whether Suzuki goes down the conventional 180-degree route as seen on the Kawasaki Versys 650, or the more characterful 270-degree firing order as seen on most modern-day parallel twins.

What can be seen is the presence of an offset golden USD fork which represents a big step-up in terms of hardware from the basic telescopic unit found on the current model. Braking hardware comprises dual disc brakes at the front and a single disc at the rear, likely to be paired to a dual-channel ABS unit.

It also appears that the bike is running a large front wheel, so it will be interesting to see whether it will retain the current 19-inch front, or sport a 21-inch front that will make it more of a Yamaha Tenere 700 rival.

This new model will also pave the way for a fresh platform, which in the future is expected to spawn an all-new middleweight naked bike; much like Yamaha and Aprilia have done with their parallel-twin platform. Honda will join the fray as well shortly and you can read about the upcoming Hornet here.

With the EICMA trade show set to be held in November, there is a strong chance Suzuki will showcase this brand-new model at that show. Suzuki already sells the BS6-compliant V-Strom 650 in India, so the new model could also make it to our shores, especially considering the rising popularity of adventure bikes in the country.

When it does make its way here, expect this new model to carry a significant increase in price compared to the Rs 8.88 lakh (ex-showroom, Delhi) price tag that the current model retails for. Upon its arrival, it will lock horns with the recently updated Kawasaki Versys 650 and the Triumph Tiger Sport 660. With their 17-inch front wheels, both aren’t exactly similar motorcycles, but they are at a similar price point.

Which bike would you pick in this category? Let us know in the comments section below.