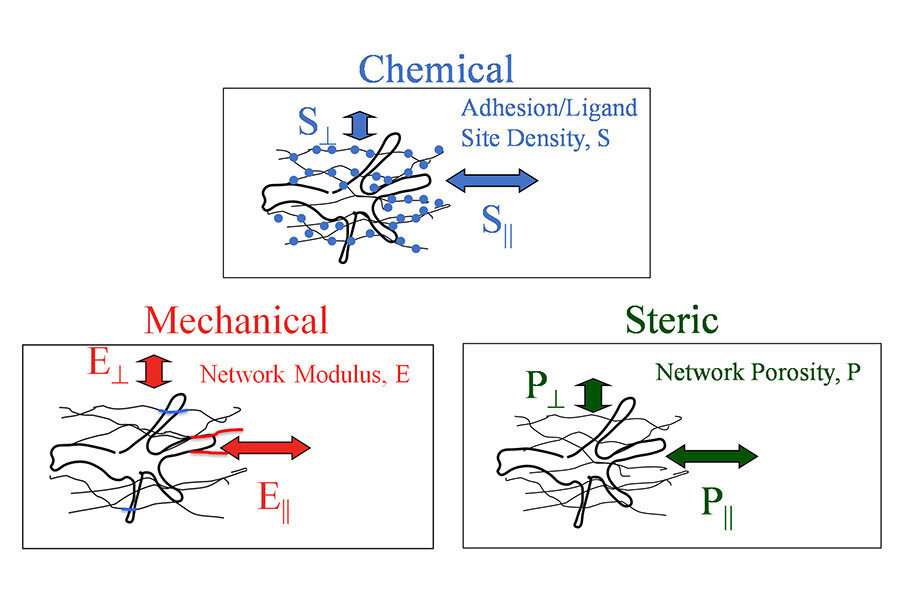 A new study, led by University of Minnesota Twin Cities engineering researchers, shows that the stiffness of protein fibers in tissues, like collagen, are a key component in controlling the movement of cells. The groundbreaking discovery provides the first proof of a theory from the early 1980s and could have a major impact on fields that study cell movement from regenerative medicine to cancer research.

The research is published in the Proceedings of the National Academy of Sciences (PNAS), a peer-reviewed, multidisciplinary, high-impact scientific journal.

Directed cell movement, or what scientists call “cell contact guidance,” refers to a phenomenon in which the orientation of cells is influenced by the alignment of fibers within soft tissues. Cells have protrusions, almost like multiple little arms, that move them within the tissue. Cells obviously don’t have eyes to sense where they are going, so understanding the mechanisms for how they align their movement with the fibers is considered by researchers to be a final frontier in controlling cell migration.

“It’s kind of like if someone dropped you in a swimming pool filled with water and thousands of skinny ropes aligned along the length of the pool and told you to swim laps—and then turned off the lights,” said Robert Tranquillo, the senior researcher on the study and a University of Minnesota professor in the Department of Biomedical Engineering and the Department of Chemical Engineering and Materials Science. “You’d reach out your arms and legs to try to move through the water and figure out the right direction using the ropes.”

Cells need to move for many reasons. They must move to the right places in a developing embryo to become the right cell types. In wound healing, skin cells need to enter into blood clots efficiently to convert the wound into a scar. And research shows that when cancer cells migrate away from solid tumors to spread throughout the body, they’re following tracks of a line of fibers. In more recent years, researchers have found that contact guidance is the underlying cellular mechanism by which they can make engineered tissues for regenerative medicine to regrow, repair, or replace damaged or diseased cells, organs, or tissues.

“Even though we use cell contact guidance for many processes in my lab to engineer tissues to mimic heart valves and blood vessels, the signal that induces the cell movement in an aligned fiber network has been unclear to us all of these years,” said Tranquillo, a Distinguished McKnight University Professor.

In this new study aimed at understanding contact guidance and improving tissue engineering, Tranquillo’s team partnered with researchers at the University of California, Irvine and University of California, Los Angeles to test the mechanical resistance (the stiffness of the fibers) in two different directions in gels of aligned fibers to see if that was a major factor in cell movement instead of the porosity of the fibers or the adhesion (stickiness) of the fibers.

“Using a special set of tools previously unavailable to us, we were able to test skin cells that we consider a ‘work horse’ for developing engineered tissues,” Tranquillo said. “What we found is that when we cross-linked the fibers (connecting them at intersections) and increased the difference in the stiffness in the two directions, but kept all the other factors the same, the cells aligned better. This is evidence that a directional difference in mechanical resistance of the fiber network influences cell orientation and movement.”

This is the first time anyone has been able to prove one major aspect of the contact guidance theory first proposed by Graham Dunn at King’s College in London back in 1982, Tranquillo said.

The next steps are to study the porosity and adhesion of the fibers to see if they have an impact on cell movement, as well as to study other cell types.

“This is just the first step to truly understand how cells move,” Tranquillo added. “If we can learn more about how cells move, it could be a game-changer in many scientific fields.”

Carrot Weather on iOS gets functional and funnier in latest update