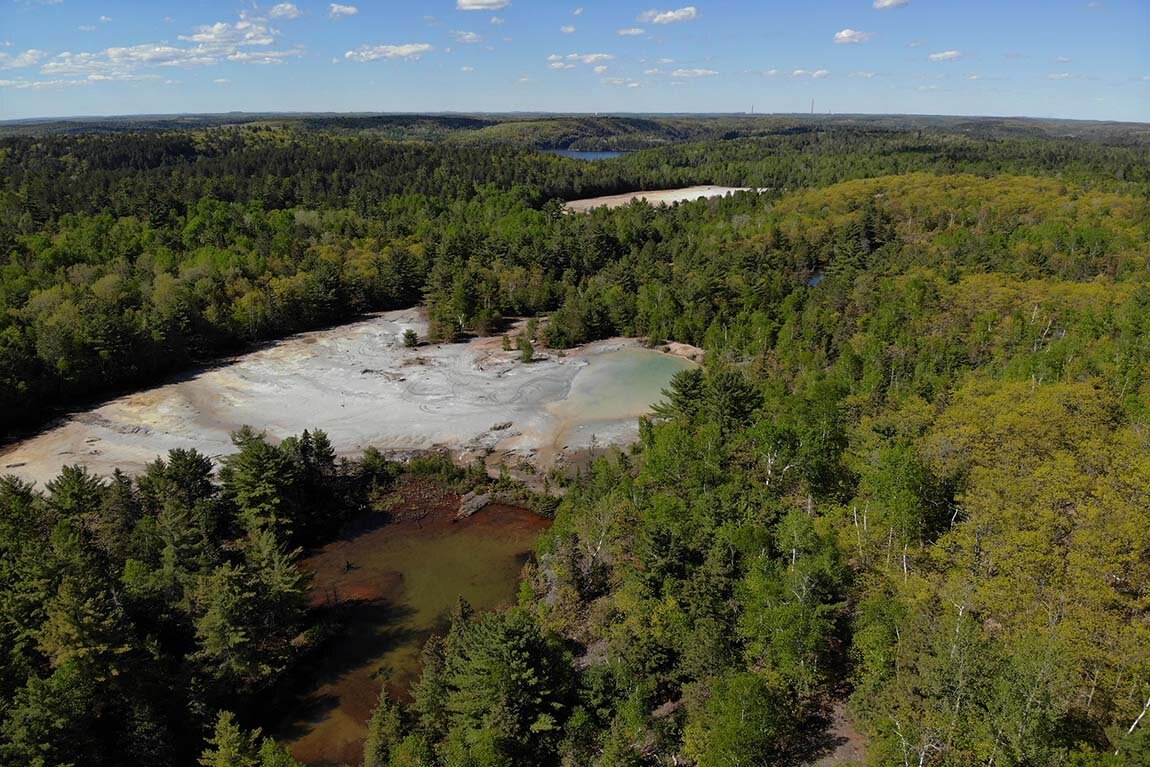 Arsenic has been leaching into the lake from tailings at the abandoned Long Lake Gold Mine, which operated intermittently until 1937 and produced approximately 200,000 metric tons of tailings, discharged directly to the environment without containment.

Now a team of researchers from the University of Waterloo has shown that a passive form of remediation that uses common waste materials can remove virtually all of the arsenic from samples of the lake water. Their results are published in the Journal of Hazardous Materials.

The scientists found that mixing wood chips, leaf mulch, and iron filings (left over from manufacturing car engines) with limestone creates conditions that encourage bacteria to grow. The bacteria pull the arsenic from the water by converting it to a solid form that is essentially trapped within the waste material filter.

Joanne Angai is the lead author on the study and conducted the research as part of her MSc in Earth Sciences at the University of Waterloo. Passive treatment is a cost-effective approach to remediation, she said. “Active treatment involves pumping water out of the ground, treating it, then putting it back in, whereas with passive methods you’re treating the water where it is,” she stated. There are also fewer ongoing operational requirements and lower costs associated with monitoring the process.

Passive treatment is greener too, according to Carol Ptacek, co-supervisor on Angai’s thesis and a member of the research team. “It’s lower in energy use, so it helps mitigate or reduce the greenhouse gas emissions often associated with active treatment systems,” said Ptacek, a professor in the University of Waterloo’s Department of Earth and Environmental Sciences.

The researchers used a variety of different techniques—including water chemistry, next-generation genomic sequencing, and synchrotron studies—to determine what reactions occurred when they pumped contaminated lake water through acrylic columns packed with the reactive material. When they tested samples of water that had passed through the mixture, they found that the arsenic concentration had decreased significantly.

Using the SXRMB beamline at the Canadian Light Source at the University of Saskatchewan, the team examined core samples of the waste material and confirmed it had trapped virtually all of the arsenic as a mixture of arsenic sulfides and arsenic bound to iron minerals. Ptacek says having access to the CLS beamline and its scientists enabled them to generate useful results from the study. “The synchrotron provided definitive characterization of the composition and structure of the reaction product in a highly efficient and effective manner,” says Ptacek.

While this approach for capturing contaminants from groundwater before they reach surface water has been applied in other cleanup projects, this is the first study to show the method is effective when used with low pH, arsenic-heavy water. Ptacek and another member of the research team, David Blowes, developed and patented the use of organic carbon and zero valent iron for remediation, back in the late 1980s and early 1990s, while they were graduate students at the University of Waterloo. While they initially used the two types of waste materials separately, they later discovered the advantages of combining the two.

“Joanne’s work demonstrates that it’s possible to treat water under challenging conditions,” said Blowes. “I think we’ll push these types of systems further, into more extreme conditions than we have in the past. This really opens up the door to treating much lower-pH water and higher contaminant concentrations than we’ve considered previously.”

A remediation plan for the site is under development, and Blowes, also a professor in the Department of Earth and Environmental Sciences and Angai’s co-supervisor, said the new approach could be applied to the ongoing efforts.

A low-cost solution to remove arsenic from drinking water

Disney World Best and Worst Restaurants From Someone With…

Asian Para Games postponed due to COVID-19 impact in China

The lonely fate of a robot on Mars