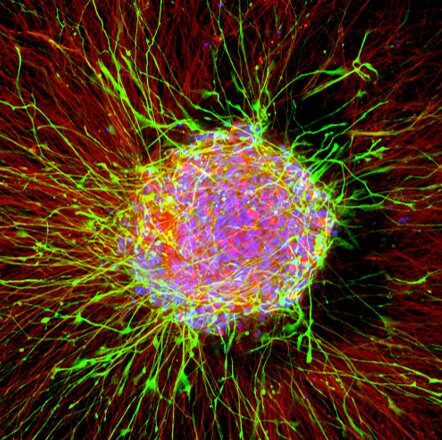 The development of our nervous system in the womb and during the first years of life is a highly complicated process: Nerve cells proliferate by cell division, specialize, change their position in the tissue and interconnect to form networks of innumerable cells.

However, this complexity also makes the development of the nervous system vulnerable, for example, to the harmful effects of environmental toxicants. The negative consequences often only become apparent much later—in childhood or adulthood.

It is therefore all the more surprising that fewer than 200 substances worldwide have been tested for their developmental neurotoxicity (DNT) in accordance with the official guidelines of the Organization for Economic Cooperation and Development (OECD)—despite the high relevance of such data for consumer safety. Obvious reasons for this include the enormous cost of at least one million euros per substance for DNT studies conducted in animals.

An alternative to animal testing

In order to reduce the effort required for hazard assessment while maintaining or even increasing reliability, an international research team led by Marcel Leist (University of Konstanz) and Ellen Fritsche (Heinrich Heine University Düsseldorf and IUF) developed an animal-free testing battery to detect DNT and used it to test 120 substances.

“Among them were some substances known to be toxic to the nervous system, such as certain pesticides or flame retardants, as well as substances considered to be harmless to serve as negative controls,” explains Fritsche, professor at the IUF–Leibniz Research Institute for Environmental Medicine (IUF) in Düsseldorf.

The results of this extensive study have just been published in the journal Chemosphere and are extremely promising: They show that the carefully compiled testing battery is technically feasible and already has a measurement sensitivity that is on a par with animal experiments. The battery provided alerts for more than 80% of the known toxicants among the tested substances and for none of the harmless substances used as negative controls.

“However, we also discovered ‘gaps’ in our testing battery. Thus, in the article we also mention possibilities which test procedures could be added to the battery to close them,” says Jonathan Blum, lead author of the study and a member of the Leist research group at the Department of Biology at the University of Konstanz.

All test procedures included in the battery are based on cell cultures. This means that they are not carried out on living organisms, but “in the test tube” (in vitro). Even more importantly, human cells are used for all tests. “Ideally, this increases the conclusiveness of the test procedures compared to animal testing, since the respective results do not have to be transferred from an animal model, such as mice or rats, to the processes relevant for humans,” Fritsche describes one of the potential advantages of using human cells.

Such in vitro methods as well as all other alternative methods to classical animal testing in toxicology are referred to as “new approach methods” (NAMs). Further general advantages of NAMs are the comparatively low costs and the possibility of testing significantly more substances for their toxicity in high-throughput procedures than would be possible in animal testing in the same period of time. Consequently, NAMs are an important part of current concepts of next generation risk assessment—by both scientific and regulatory bodies.

This is particularly relevant in view of the thousands of industrial chemicals that have not yet been tested, but nevertheless are produced at a rate of more than 1,000 tons per year. The findings obtained in the current study play a very important role in this, confirms Andrea Terron, who works for the European Food Safety Authority (EFSA) in Parma and was involved in the study: “The study was a cornerstone of our strategy at EFSA to obtain and use DNT data from human relevant in vitro tests for risk assessment.”

Application in the regulatory context

A first concrete application for the testing battery could be screening the large number of pesticides and substances in the living and working environments for which currently only insufficient or no DNT data are available. In fact, key international organizations, including the OECD, are taking the first steps toward implementing the testing battery and using it for regulatory purposes. “This study has been extensively discussed by OECD member countries and formed the basis of a draft guidance on how to interpret data from the DNT in vitro battery,” says Magdalini Sachana of the OECD.

For example, when a pesticide is re-approved in the EU, the testing battery could provide hazard data for the substance to be evaluated, which in the best case would already allow a final assessment with regard to DNT. “If the data are not finally conclusive, follow-up tests could be carried out, such as the extensions we have proposed for our testing battery,” Blum says, explaining one possible approach.

A new alliance of the study authors with other European partners to further develop the testing battery has planned work that will also include input from the U.S. Environmental Protection Agency. In order to make the tests available to end users, such as the pesticide industry, Ellen Fritsche’s team recently founded the start-up DNTOX.

Provided by
University of Konstanz

As COVID-19 becomes routine, Africa readies for next crisis