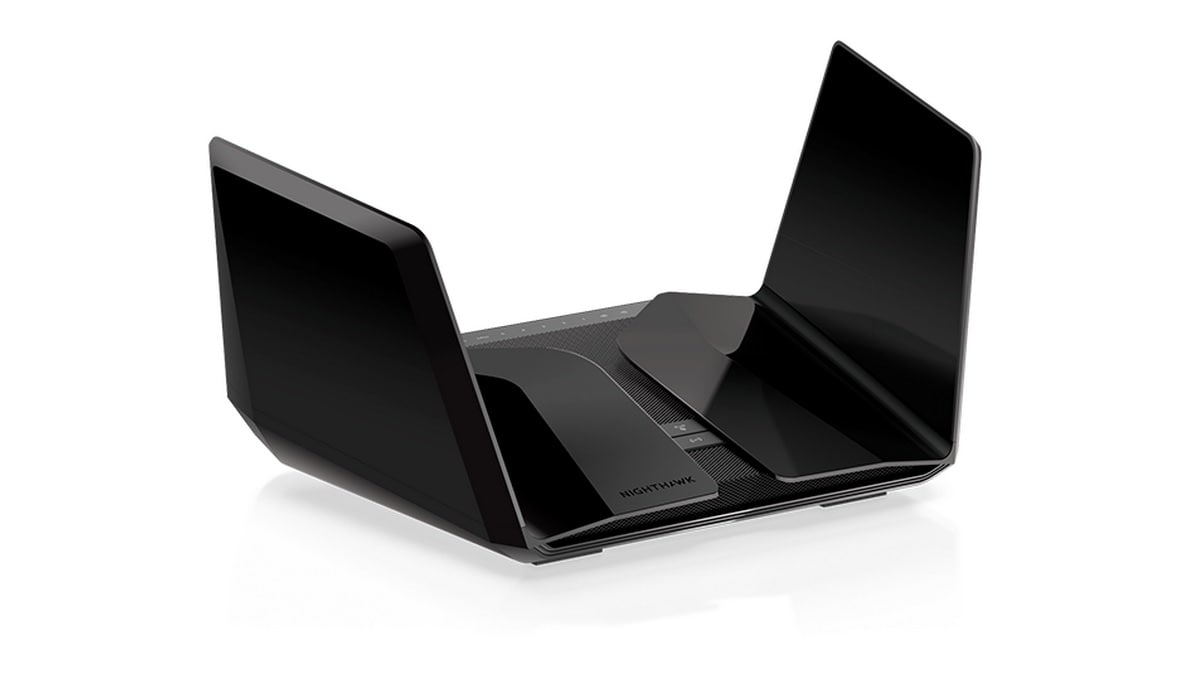 Netgear Nighthawk RAXE500 Wi-Fi 6E-ready router has been launched at the virtual CES 2021 conference. It has a stylish space ship looking design and boasts of lower latency for 4K/ 8K streaming, AR/ VR gaming, and video-conferencing. It is powered by a quad core processor and Netgear says it can provide connectivity to up 60 devices at once. The Nighthawk RAXE500 is a tri-band router thanks to Wi-Fi 6E support on top of 2.5GHz and 5GHz and can be easily set up with the Nighthawk app. The company also announced an unlocked version of its Nighthawk M5 5G Mobile Router, Nighthawk 4G LTE WiFi 6 Router (LAX20), and the Netgear 4G LTE Modem (LM1200).

Netgear has not shared any information on international availability for the Nighthawk RAXE500.

The router is powered by a quad-core processor clocked at 1.8GHz and comes with Netgear Armor cyber threat protection. It supports WPA3 and VPN. You get two USB 3.0 ports, four Gigabit Ethernet ports, a 2.5 Gigabit port, and can aggregate two Gigabit LAN ports for faster transfers. Netgear says it can be easily set up with the Nighthawk app which also shows you the connected devices, can run speed tests, manage subscriptions, and more. The Nighthawk RAXE500 also has MU-MIMO technology. In terms of dimensions, it measures 298x78x211mm and weighs 1.45kg.

The Nighthawk M5 5G mobile router is powered by the Qualcomm Snapdragon X55 SoC and supports Wi-Fi 6. This hotspot device can now take all SIM cards, but the company says it works best on AT&T and T-Mobile networks. It comes with 5GNR Sub 6GHz (NSA) and supports LTE CAT 22, LTE Advanced, 4×4 MIMO, and 256QAM. The Nighthawk M5 5G can connect up to 20 devices and can deliver a maximum download speed of 1.2Gbps on 5GHz. It has a data usage metre and weighs 240 grams.

The Netgear LM1200 4G LTE Modem, as the name suggests, supports LTE CAT 4 which can deliver up to 150Mbps download and 50Mbps upload speeds. It has a USB Type-C port for power, two Gigabit Ethernet ports, a SIM slot (Nano), and two TS9 RF ports. It has a compact design and can work with any Wi-Fi router system to boost its range and speed.

If you have any of this ice cream in your freezer, throw it out – BGR