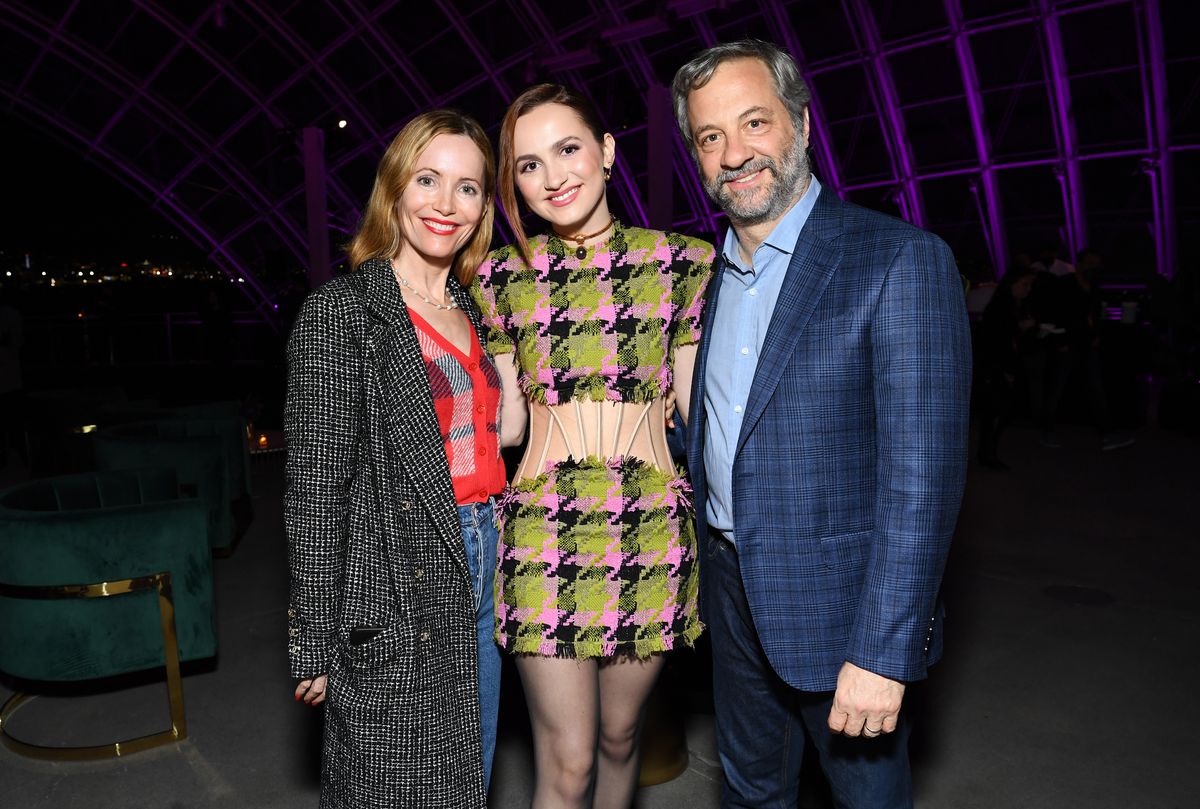 An Oscar-winning performance in Cabaret. Creating the Church of England. Turning someone into a spider. The downfall of Ellen DeGeneres. A vagina-scented candle. The Iraq War. Dating Anna Kournikova. The other Iraq War. Eternal salvation.

Nepotism babies have accomplished a lot, but it’s only recently that we’ve given them a satisfying name.

To be clear, the practice of nepotism — people parlaying their own success to benefit their friends and family members, children primarily — predates all of us, going back to the days of the old gods and young Earth. As does the act of identifying, bemoaning, and maybe even admiring it. “Nepo baby” is simply an extension of the “see something, say something” approach to nepotism.

Yet the musicality of the phrase, the hilarity of reducing an adult human to a tiny helpless infant, and the stickiness of the label all ensure that we never forget nepotism when it comes to this person and their accomplishments.

But “nepotism baby” and its current popularity is more than just an insult or identifier. The phrase also says a lot about how we’re attempting to grapple with the systems of power that make up our world. The feelings we may have toward a nepotism baby — frustration, admiration, indifference, schadenfreude — say as much about us as they do about the children of privilege.

Nepotism babies are all around us

“Nepotism baby” or “nepo baby” exploded back in May, when a Twitter user at the handle @MeriemIsTired noticed that Maude Apatow, star of HBO’s Euphoria, was the daughter of actress Leslie Mann and producer-director Judd Apatow. Maude is in the same industry as her successful parents, shares her father’s last name, and has acted in their projects for years, so it’s not as though she ever intended her parentage to be a secret.

At the time, however, the civilian nepotism detective wasn’t immediately familiar with how movies like Anchorman, The 40-Year-Old Virgin, Knocked Up, and Superbad, which Judd Apatow produced or directed, had the late aughts in a cultural stranglehold. Mann appeared in some of those movies and has been a comedic stalwart worthy of greater recognition since Big Daddy in 1999. (God, she was so good in Blockers.)

No doubt the tension between people of a certain age knowing Maude Apatow had famous parents and shock at younger people only now finding out the obvious truth helped launch a feeding frenzy around the term. It was so frantic that Euphoria showrunner Sam Levinson, a nepo baby himself, somehow eluded scrutiny.

The term “nepotism baby” itself is mildly redundant, like “false pretense” or “6 am in the morning,” in that nepotism already means the practice in which someone gives their family members, particularly their children, a benefit. But there’s a satisfying roundness to it. It’s also quite pleasing in any context to casually insult adult humans by referring to them as babies, because babies cannot help themselves.

Try it. In your head, think about a nemesis you have. Now imagine calling them a baby. Imagine them as a helpless little loser baby. Stop smiling.

“Nepotism baby” is a tool

Beyond the satisfaction it provides linguistically and in terms of pure meanness, what makes “nepotism baby” so popular is that it also functions as a tool, a simple way for our brains to deconstruct the bigger idea of upward mobility in inequality. Every human is someone’s child, but not everyone’s parents are a blue link on Wikipedia.

Shai Davidai is a professor at Columbia’s business school and studies the way people in the United States make sense of economic success. He explained that Americans tend to have a strong, optimistic belief in meritocracy — the idea that hard work demonstrates exceptional skill, and that if you have both, you will be rewarded accordingly.

“I’ve studied how and when people realize that moving up the ladder may actually be very difficult. That happens when they are faced with high inequality,” Davidai says.

Things like the circulation of statistics about the size of a billionaire CEO’s tax-free salary aren’t what drive home the problem of inequality — Davidai tells me that most Americans have a hard time grasping the concept of how enormous $100 million really is, and how astronomically $1 billion dwarfs that number.

Rather, it’s examples that they can easily relate to, like a friend or a coworker getting a leg up, that allow them to understand unequal treatment. If we think we’re on the same footing as someone, and that person benefits from nepotism — say, getting a promotion that could’ve gone to us — that triggers an emotional response. These localized interactions are where and how Americans have traditionally been able to understand and call out nepotism.

Today, however, the world has gotten smaller. Through the internet and social media, it’s easier than ever to compare ourselves and our personal situations to an infinite number of people. It’s also easier than ever to dig up information, like Maude Apatow’s parents (not a secret) or Zoey Deutch’s famous mom (maybe more obscure). Since actors are so visible and because movies and television are industries in which nepotism and affluence go hand in hand, Hollywood nepotism babies are among the easiest to spot.

This supercharged familiarity means nepotism babies of all stripes can trigger an emotional response.

“The reaction becomes an emotional response, and the realization is not about nepotism itself. I think nepotism is the tool that leads to the realization that ‘my life is going to be harder than I assumed,’” Davidai says. “Unless we have vivid images, like someone we can think about, inequality is still abstract. Nepotism babies, they deprive us of that feel-good ‘American dream’ story.”

Nepotism babies are not a monolith

“I am not offended by the term ‘nepotism baby,’” nepotism baby and journalist Ben Dreyfuss told me. “It is a funny term! Maybe I’m delusional, but I also don’t think it’s even a term that implies malice? Like, if you call me a ‘nepotism baby,’ I am not going to assume you hate me.”

Dreyfuss is the son of Richard Dreyfuss, the actor who starred in American Graffiti, Jaws, and Stand By Me. Ben Dreyfuss’s primary occupation is journalism, which means he isn’t a nepo baby through and through — but he does have acting credits to his name. And he has written about Jaws.

For Dreyfuss, the term on its own is merely a statement of fact, an assessment of his privilege. He acknowledges that the phrase can be used derisively as a way to reduce someone’s achievements. Dreyfuss isn’t a stranger to criticism or people being mad at him online. He says that instead of fretting about being called a nepotism baby, though, nepotism babies should take the insult in stride because of said privilege.

“You should find the humor in it more!” Dreyfuss says. “The humorous way of looking at it is this: The people calling you a nepotism baby on TikTok or whatever are also privileged little babies of modernity, and they have microwaves and running water and a long life expectancy, and they have it better than virtually any person who has ever lived at any previous time on Earth — except for you and some other people currently alive. None of us are starting at the bottom.”

Whether the phrase is full of spite or a neutral assessment may well depend on who is using it, and against whom.

The person who realized Maude Apatow is a nepotism baby was shocked because they like Euphoria. Same goes for the people who gush over Maya Hawke’s performance in Stranger Things or Dakota Johnson for taking down Ellen DeGeneres. On the other side of that, when a nepo baby flops, privilege and favoritism are among the first things people call out. Nepotism babies did not choose this fate, but they should never fly too close to the sun. Or secretly work for Lockheed Martin.

“It would be very easy if someone was untalented, very lazy, and was in a successful movie, right? The issue is, these ‘nepotism babies’ are usually talented,” Davidai says.” Our complexity is trying to figure out why they are talented and famous. Is it because of something about them, or is it because of the fast lane they got in life? We don’t like that complexity.”

Davidai also theorizes that while we’re all likely to say nepotism is bad when other people take advantage of it, we’re less likely to have the same response when we could benefit from it. Find me someone who would reject being Rihanna’s baby and I will show you a liar, a scenario I just made up in my head but that feels correct.

A more enriching way to think about the nepotism baby discourse might be to consider how our society values people who aren’t born with as much privilege.

If nepo babies are born with an inherent head start, that means there are also people who do not have those advantages. Nepotism babies catch spite but don’t necessarily make us think about changing the larger system at hand and helping those less fortunate. Naming the problem is simple; considering the wider picture outside of ourselves is harder, never mind creating actual solutions.

“When people talk about meritocracy, they generally think, ‘Do people like me succeed?’ But they forget that, well, the United States is a diverse place. And there are a lot of people trying to succeed who may not be like you,” Davidai says. Nepo babies are just step one in understanding the economic, racial, and cultural systemic forces that shape our reality.

In other words — nepotism baby or not — we could all stand to see our positions in the world a little more clearly.

US Open: Rafael Nadal rallies back after dropping the first set against Rinky Hijikata

Everything Coming to and Leaving HBO Max September 2022