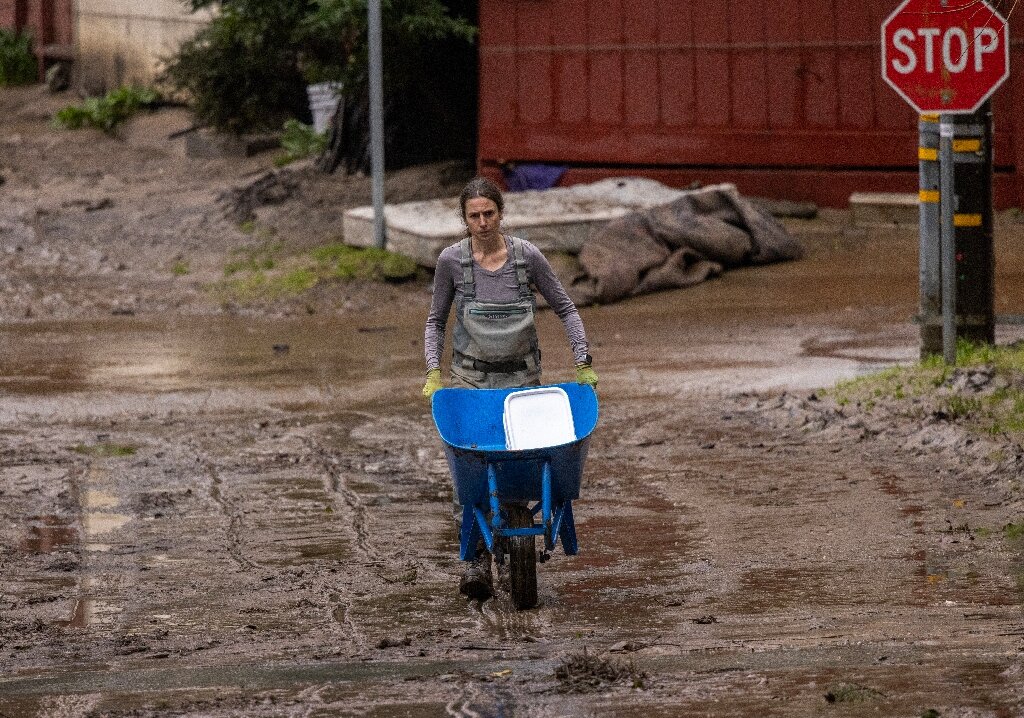 Jason and Shannon Phleger had just rebuilt their wildfire-ravaged home when it was wrecked again by one of the powerful storms that swept through California last week.

Even for a state almost perpetually suffering from drought, the parade of biblical disasters is too much to bear.

“When I heard the news, my heart just dropped; it was heartbreaking,” said Shannon Phleger of the moment she learned heavy winds had brought a redwood tree crashing down onto her house.

Near-record rains have pulverized much of California over the last few weeks, as nine storm systems crashed in from the Pacific Ocean in rapid succession.

Floods, landslides and rockfalls killed at least 20 people, cut off communities and left hundreds of thousands of homes without power.

Boulder Creek, a small mountain community north of Santa Cruz, escaped the worst of the floods but powerful winds proved too much for trees weakened by wildfires there in 2020.

Just days before the Phlegers and their two sons were due to move back into their rebuilt home, the still-blackened trunk of one of those trees crashed through the roof.

“I believe that was a direct result of climate change,” Shannon Phleger, 43, told AFP as she surveyed the devastation.

Humanity’s unchecked burning of fossil fuels over the last two centuries is making the planet warmer and altering weather patterns.

That means wilder and wetter storms, as well as longer, hotter heat waves that create the conditions for supercharged wildfires.

In August 2020, after years of drought and as temperatures soared, lightning sparked a mammoth blaze in the Santa Cruz mountains.

The protracted rebuild was complete and the couple, both nurses, were days away from a building inspector’s green light when nature struck again.

Now they will face another four months of work to repair damage to the roof, the floor, the windows, the insulation and the drainage system.

“Our struggle kind of represents… what California and the West Coast is going to look like in the future,” Jason Phleger said.

On New Year’s Eve, a torrent of rocks and mud came thundering down towards her carrying an SUV and someone’s propane tank, that all came to rest just feet (meters) from her trailer.

“The landslide happened because of the fire—the brush that holds the dirt in place was gone,” the 68-year-old told AFP.

“I thought that it had come back; much of it was all green up there, but it was just not deep rooted.”

Between the wildfire of 2020 and January’s storms, “the area has definitely taken a beating,” said local volunteer fire captain Ian Jones.

For the past two weeks, his district’s fire station has been inundated with emergency calls.

“Amazingly, no one’s been injured,” he says.

Even after two years of recovery, the wildfire made its impact felt during these storms.

Nathalie Dervaux’s riverside home was flooded to the upper floor as the San Lorenzo River burst its banks three times in two weeks.

“Entire trees fell in the river, plus all the debris that had been created by the fire two years ago were just washed out,” she said.

That created dams that “definitely contributed to the height of the river.”

The home she has lived in for more than a decade has now been declared uninhabitable.

Even so, this 49-year-old is not prepared to give up her little chunk of mountain.

“Global warming is definitely not helping,” she says.

“But I still love the area.”

COVID, flu, colds and RSV: Can more than one hit you at once? : Shots