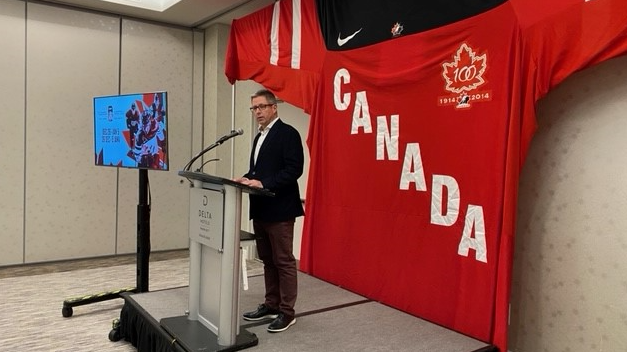 A who’s who of Moncton’s business community met at a downtown hotel Wednesday afternoon to talk strategy for businesses and off-ice events for the upcoming 2023 IIHF World Junior Hockey Championship.

The tournament is still in the shadow of a pair Hockey Canada sex scandals and, as a result, multiple big name companies have pulled sponsorship from the organization.

Hockey Canada local event lead Grant MacDonald was at the meeting and was asked if any of those sponsors have returned.

“Certainly national partners have paused on their contribution to this championship, but we are having conversations with local companies and those conversations have been positive and open and we’re hopeful that we’ll be able to get some local partners on board,” said MacDonald. “We already have some that we are working with already.”

Sponsorship spaces are not all full and MacDonald said that’s an opportunity for local companies to get national and international exposure. But does that mean the tournament will lose money without major sponsors?

“No it will not,” said MacDonald. “Ticket sales have been really strong. In fact, we’re about 80 per cent to our ticket revenue target (in Halifax) and in Moncton we’re at about 65 per cent, so we’re confident that we’re going to have full buildings in both Moncton and Halifax and that will show the energy of this holiday tradition.”

Bill Whalen, co-chair of the local organizing committee, said hotel occupancy for the event is at 50 per cent, a number unheard of for late December/early January.

Chamber of Commerce for Greater Moncton CEO called the championship a world event.

“People are watching, people are especially watching this year to see how Moncton and Halifax will pull this off. And if we do a good job, and I think we will, then that bodes really well for future events down the road,” said Wishart.

Wishart said those who don’t have tickets can still feel a part of the World Juniors with the Avenir Centre plaza being the focal point for off-ice festivities.

“We decided to program things so that if you weren’t going to a an actual game you could still feel part of the World Juniors, so the Avenir Centre plaza is going to be a focal point. There’s going to be some restaurants and bars that will go out of their way to create a fan experience,” said Wishart. “I think even if you don’t go to a single game you will still remember the World Juniors in Moncton.

The tournament begins on Boxing Day in both Moncton and Halifax and runs until Jan. 5.