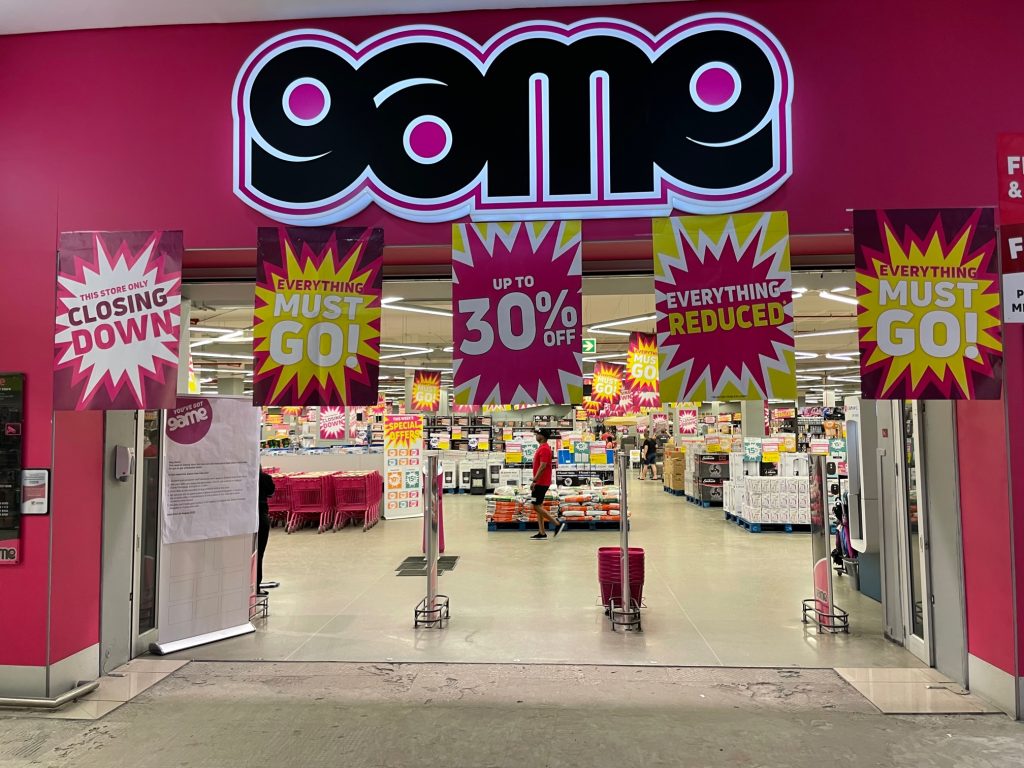 Massmart, subject to a full buyout offer from parent Walmart Inc, has begun shutting unprofitable and unviable Game stores across the country.

In December 2021, it announced that it had identified an “initial” “15 stores that will be subject to a possible sale”. This followed the re-lay of all 114 Game stores in the country which allowed the retailer to compare sales trends and potential.

Read: Why Walmart decided to finally put Massmart out of its misery

Eight stores are now in the process of being shut. It has begun aggressive markdowns on all stock at these stores, listed on its website.

The stores being closed include Bel Air (Northriding), Greenstone and Mall of the South in Johannesburg, the Cape Town CBD one, the Ulundi and Westwood Mall outlets in KwaZulu-Natal, the Gilwell store in East London and Game in Hazyview.

With very limited exclusions, discounts of up to 40% are being offered on all stock, with the closing down sales beginning at the end of last month already. A letter to customers regarding limits on other discounts and promotions is dated 24 August.

Clothing, camping equipment, laptops/computers, furniture and toys are all marked down by 20%, hand tools, hardware, air conditioning and fans by 25%, while heaters, electric blankets and stationery are less 40%. Currently, the minimum discount storewide is 10%.

Brian Leroni, senior vice president of group corporate affairs at Massmart, confirms that these eight stores are part of the 15 identified by the group.

Game vice president Andrew Stein this month confirmed to the media that 10 underperforming stores would be closed.

In one of the stores visited by Moneyweb, even shop fittings and fixtures will be sold. A sign asks interested parties to leave their details with store management.

Certain departments already have noticeably limited stock, with many instances of empty shelves that will not be restocked. The store in question had an oversupply of heaters and Christmas decorations.

In its interim results announcement at the end of August, Massmart said that the divestment of these stores, as well as an additional 14 stores in East and West Africa, “represents an intensification of the group’s initiative to optimise the Game store portfolio as we move beyond our turnaround imperative, to prioritise investment in core and high returning trading assets”.

In December 2021, it said it “anticipated being in a position to further update the market [on the African store sales] in the coming weeks”.

There has been no update since, save for it stating in its interim results at the end of August that the divestment of non-core stores was “at an advanced stage”.

It also noted then that it is “currently following a Section 189 (of the South African Labour Relations Act 66 of 1995, as amended) consultation process with some of these South African stores”.

Leroni confirms that the Section 189 process started about six weeks ago. The eights stores being shut down are affected.

He says Massmart’s “objective is, as far as possible, to redeploy staff members elsewhere in the group”.

In August 2019, Masscash – the division which previously housed Game and DionWired – had 172 stores, including DionWired. In early 2020, then new Massmart CEO Mitchell Slape announced the closure of the 23 DionWired outlets. A further 11 wholesale cash and carry outlets were also closed as part of this process, which the group said would affect about 1 440 employees.

It now has 146 Game outlets, with the core business – in other words, excluding the portfolio in East and West Africa as well as the 15 local stores – numbering 117. Once it succeeds in selling/divesting/closing those in Nigeria, Ghana, Kenya and Uganda, its footprint outside of South Africa will be limited to its operations in SADC countries (Botswana, Lesotho, Malawi, Mozambique, Namibia, Tanzania and Zambia).

Read:
CompCom backs Massmart’s R1.36bn sale of Cambridge and Rhino to Shoprite
Massmart doubles down on everything but horror-show Game
Just how broken is Massmart’s Game?

These are not the first Game store closures in recent years. The group closed one store in 2020 and another three in 2021. Rather, this is the first round of closures in this targeted divestment of 15 underperforming stores.

Leroni would not be drawn on whether the remaining seven would be shut, saying simply that “they are the subject of continued review”.

Massmart’s efforts to turn around the lossmaking Game business appear to be yielding results. Sales in the core stores remained the same (R6.4 billion), when compared to June 2021. The group says “comparable store sales increased by 2.1%, while the gross margin increased by 74bps [to 27.9%] and trading loss improved by 30.1% to R231 million”.

In the South African core business, trading losses have improved by more than 50%, and it has seen positive comparable sales growth in five of the first six months of the year.

Massmart says the core business has been “significantly outperforming” the non-core one, but that “more work” is required.

Listen to Slape chatting to Ryk van Niekerk about Massmart’s buyout offer and its latest results (or read the transcript):