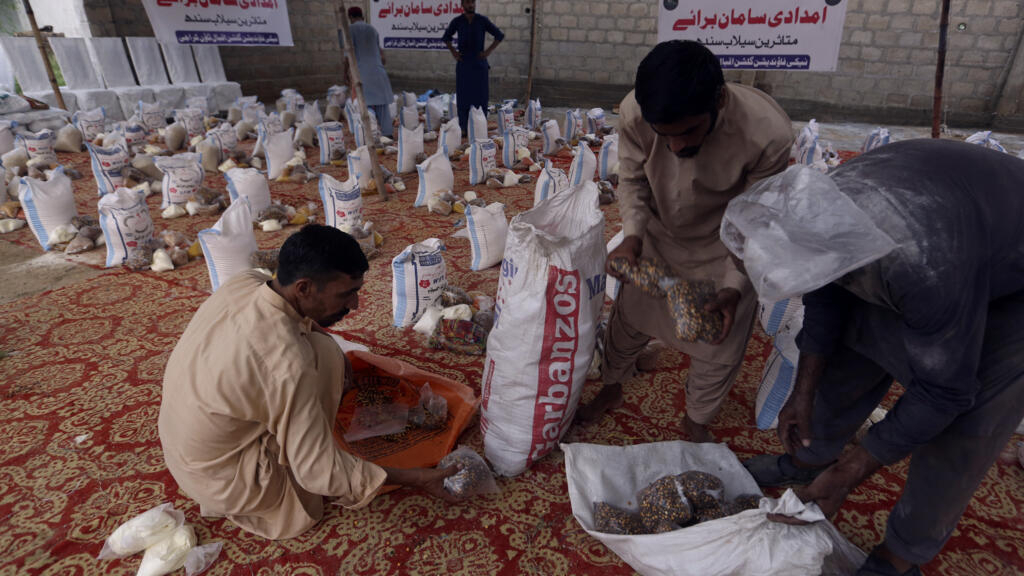 A huge relief operation was under way Monday and international aid began trickling in as Pakistan struggled to deal with monsoon flooding that has killed more than 1,000 people and affected more than 33 million in the South Asian nation.

Officials said 1,061 people have died in Pakistan since June when the seasonal rains began, but the final flood death toll could be higher as hundreds of villages in the mountainous north have been cut off by flood-swollen rivers washing away roads and bridges.

The first aid flights began arriving on Sunday, from Turkey and the UAE.

The annual monsoon is essential for irrigating crops and replenishing lakes and dams across the Indian subcontinent, but it can also bring destruction.

Officials said this year’s flooding has affected more than 33 million people – one in seven Pakistanis – destroying or badly damaging nearly a million homes.

Climate Change Minister Sherry Rehman called it “the monster monsoon of the decade”.

This year’s floods are comparable to 2010’s – the worst on record – when more than 2,000 people died and nearly a fifth of the country was underwater.

Near Sukkur, a city in southern Sindh province and home to an ageing colonial-era barrage on the Indus River that is vital to preventing further catastrophe, one farmer lamented the devastation wrought on his rice fields.

Millions of acres of rich farmland have been flooded by weeks of non-stop rain, but now the Indus is threatening to burst its banks as a result of torrents of water coursing downstream from tributaries in the north.

“Our crop spanned over 5,000 acres on which the best quality rice was sown and is eaten by you and us,” Khalil Ahmed, 70, told AFP.

“All that is finished.”

Much of Sindh is now an endless landscape of water, hampering a massive military-led relief operation.

“There are no landing strips or approaches available … our pilots find it difficult to land,” one senior officer told AFP.

The army’s helicopters were also struggling to pluck people to safety in the north, where steep hills and valleys make for treacherous flying conditions.

Flooding from the Swat River overnight affected northwestern Khyber Pakhtunkhwa province, where tens of thousands of people – especially in the Charsadda and Nowshehra districts – have been evacuated from their homes to relief camps set up in government buildings. Many have also taken shelter on roadsides, said Kamran Bangash, a spokesperson for the provincial government.

Many rivers in the area – a picturesque tourist destination – have burst their banks, demolishing scores of buildings including a 150-room hotel that crumbled into a raging torrent.

Khaista Rehman, 55, no relation to the climate minister, took shelter with his wife and three children on the side of the Islamabad-Peshawar highway after his home in Charsadda was submerged overnight.

“Thank God we are safe now on this road quite high from the flooded area,” he said. “Our crops are gone and our home is destroyed but I am grateful to Allah that we are alive and I will restart life with my sons.”

The government has declared an emergency and appealed for international help.

Pope Francis on Sunday said he wanted to express his “closeness to the populations of Pakistan struck by flooding of disastrous proportions’’.

Speaking during a pilgrimage to the Italian town of L’Aquila, which was hit by a deadly earthquake in 2009, Francis said he was praying “for the many victims, for the injured and the evacuated, and so that international solidarity will be prompt and generous”.

Prime Minister Shabaz Sharif visited flood victims in the city of Jafferabad in Baluchistan. He vowed the government would provide housing to all those who lost their homes.

The flooding could not have come at a worse time for Pakistan, where the economy is in free fall.

US Open 2022: Purav Raja predicts a Nadal vs Medvedev final