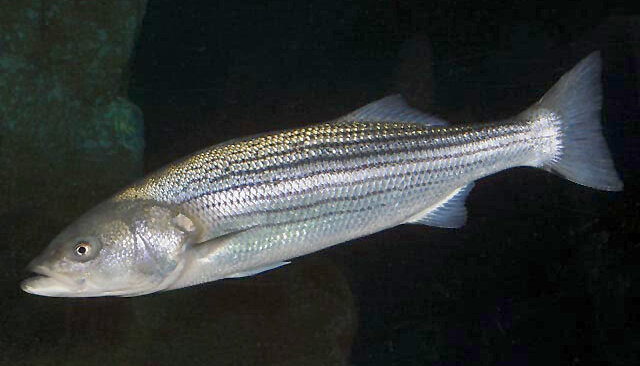 For the fourth straight year, juvenile rockfish numbers in Maryland waters were well below the historical average, according to a survey conducted by the state Department of Natural Resources.

Researchers, who visited 22 different spawning areas in the Chesapeake Bay and its tributaries this year, caught an average of 3.6 recently hatched rockfish per sample, slightly more than last year’s 3.2.

But the longtime average for the survey, called the young-of-the-year index, is 11.3.

Michael Luisi, assistant director with the Maryland Department of Natural Resources’ Fishing and Boating Services, called the results “disappointing,” but said there is “no need to panic.”

“We have seen this type of variable inclines and declines over a short period of time for the juvenile population, so this is not so uncommon that it’s causing us to panic,” he said.

But another year of lackluster results is raising alarm among advocates for Maryland’s state fish. Prized for their sweet and nutty but mild flavor, rockfish are the bay’s most popular commercial and sport fish. The Chesapeake Bay Foundation estimates its economic impact at about $500 million a year. The species is also known for its fight, which adds to the sport and charter fishery’s allure.

The rockfish board of the Atlantic States Marine Fisheries Commission, which oversees a variety of East Coast fisheries, convened Nov. 7 to analyze the results of a full stock assessment for the species, which is also known as striped bass.

Earlier this year, the fisheries commission adopted a new amendment to the striped bass management plan, with more conservative triggers for new regulations. It came after the last striped bass stock assessment found the population was overfished. The amendment requires overfishing to end within one year, and for the stock to be rebuilt by 2029.

It’s possible that the results of this year’s stock assessment, which will tee off the regulations for next year’s fishing season, could paint a different picture than Maryland’s juvenile striped bass survey, showing stronger numbers for adult fish. But even if they do, environmental advocates likely will continue pushing for greater restrictions on the fishery, particularly in the summertime, when warmer water temperatures stress the species, said Allison Colden, Maryland fisheries scientist for the Chesapeake Bay Foundation.

“I think it’s good if we see some positive rebuilding,” Colden said. “But folks like CBF and others are still going to be encouraging the board to keep in mind that we’ve got four years of low recruitment coming behind the fish that we’re seeing now.”

This year, just as in 2021, Maryland’s Department of Natural Resources postponed the spring trophy season until May 1, banning anglers from targeting striped bass in the bay in April. That’s generally when an increase in air and water temperatures triggers rockfish spawning, which occurs in April, May and June.

“It was pushed back by two weeks with the presumption that a majority of fish had spawned by May 1, but I think that is another thing that we should be continuing to look at,” Colden said. “If we’re going to be catching pre-spawn fish: No, I don’t think that’s a good thing for us to be continuing to do.”

As the conditions in the bay evolve, including due to climate change, Colden said, it’s important to study when the rockfish are spawning, with the goal of reducing the number of fish that are caught before they can reproduce.

Fishing for stripers also was prohibited during the last two weeks of July this year, though it was allowed to pick back up again in August. It was the same in 2021. But environmental groups like the Bay Foundation have pushed for deeper cuts to the summer fishery and will continue to do so.

“It’s not just those two weeks that are challenging for striped bass,” Colden said. “And I know that the department is making an attempt to balance an economic impact with an ecological one for striped bass. But I think at this point, those things should always be reconsidered.”

DNR’s Luisi said there’s not going to be any liberalization of the regulations for the coming year.

“If anything, we’re going to be cutting back or conserving the population more than what we have now,” he said.

There have been some discussions about protecting larger female striped bass in the population, perhaps by instituting a maximum size limit—rather than the minimums that currently exist—Luisi said. The department also may consider a longer summer closure, though he noted it would have an outsize impact on charter captains and summer tourists.

“We don’t want to put people out of business, but we also have a responsibility to protect the striped bass population,” Luisi said.

Jason Seman, a full-time charter boat captain operating out of Stevensville, said he fears a summer closure any longer than two weeks would hurt his business. On top of the regulations, weather can limit fishing days too. And the summertime is the most popular for his charter, called The Marylander.

He said he would prefer a summer closure in August rather than July, partly because there are greater numbers of other fish to go after, like bluefish and Spanish mackerel. And August seems just as stressful for the rockfish.

“If I was in a bathtub in hot water, you’re still in hot water in August,” said Seman, whose company is called Maryland Fishing and Hunting.

The numbers out of Virginia’s water this year could be a source of hope, Luisi said. A similar study conducted by the Virginia Institute of Marine Science calculated the state’s young-of-the-year index at 7.95 fish per sample, above that state’s historic average of 7.77. It was the 10th straight year of average or above-average figures.

Luisi said the number of adult female rockfish currently in the Chesapeake have produced large classes of juveniles in the past, but failed to this year. A number of environmental factors could be the reason, he said.

“The conditions in the Bay, predators, water quality—not just in the Chesapeake Bay but along the entire Atlantic Coast—plays a huge role in whether or not the success of the spawning of the fish that came into Maryland last year happens,” he said. “And those types of things are a lot of times out of our control.”

Still, the last time Maryland’s juvenile rockfish index even climbed above 4 was in 2018, when the index reached 14.8.

Since the state survey began in 1954, the numbers have at times varied significantly from year to year. But after consistently below-average figures in the 1970s and 80s, Maryland instituted a moratorium on fishing for the species. After the ban was lifted, the 1990s saw the strongest tallies yet.

The recovery of the rockfish has been lauded as a Bay success story, but experts say new factors could complicate efforts to strengthen the population in 2022.

“There are some things that they don’t have going for them, that they did when they recovered so many years ago,” said Dave Secor, a professor who studies fisheries at the University of Maryland Center for Environmental Science.

That includes the burgeoning population of invasive blue catfish, which have effectively replaced striped bass as the dominant predator in the Chesapeake Bay, Secor said. The catfish also are preying on juvenile striped bass, he said, but officials would benefit from more studies on just how big a toll their appetite is taking.

“We just don’t know how many and what fraction of those fish they are taking,” Secor said.

Changes in mortality rates also have impacted the species, Secor said, including catch-and-release mortality. Particularly in the warmest months of the year, when striped bass are hooked, removed from the water and released, many become stressed by the temperature and die.

“It’s really the air temperature and bringing them up out of the water that apparently causes the damage,” he said.

An increased frequency of warmer days due to climate change could further imperil the summer fishery, Secor said.

“Unfortunately, it means that the summertime striped bass fishery is going to be ever-diminishing, if you follow those kinds of regulations,” he said.

Going to the World Cup? Get ready to have your privacy invaded