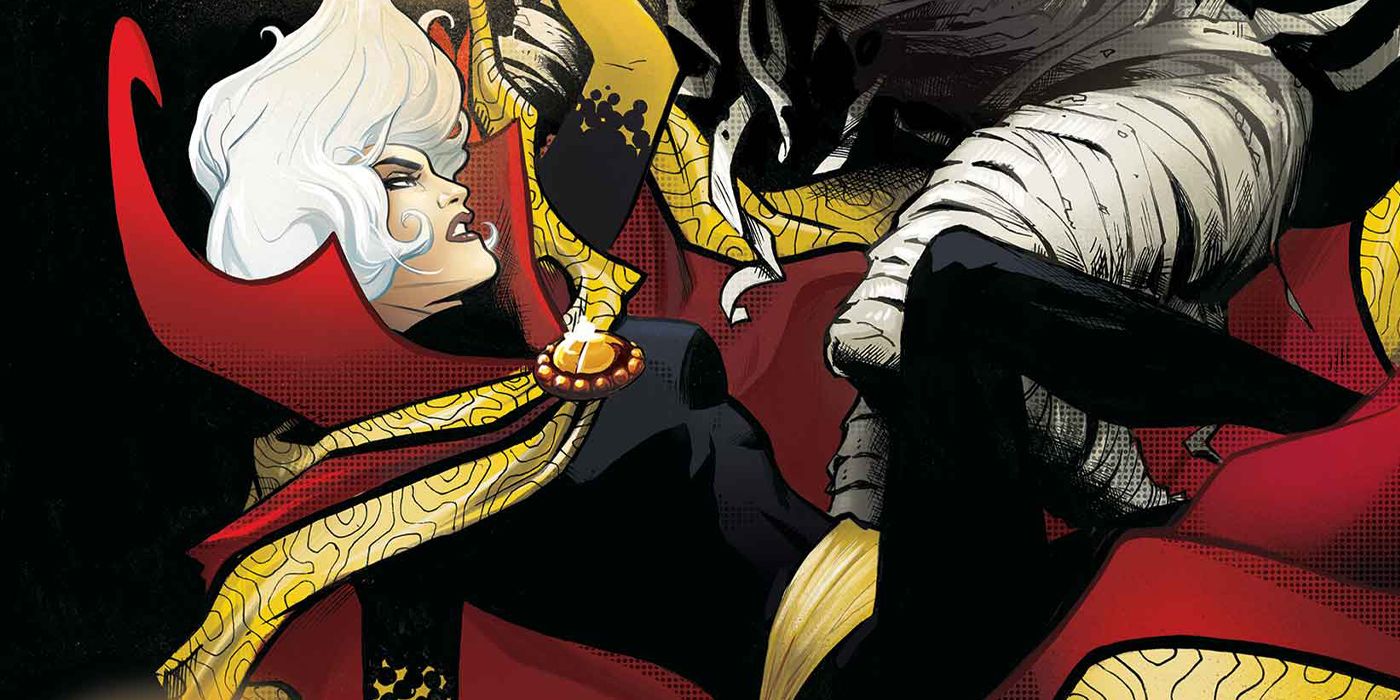 Clea Strange hails from warlords and is the Sorcerer Supreme of two realms, but now she faces a massive challenge: entertaining her mother for dinner.

Clea Strange has taken over as Earth-616’s main Sorcerer Supreme following the death of her husband, Doctor Strange. Towards the end of Strange #3, a message was delivered to Clea and Wong at the Sanctum Sanctorum — Clea’s mother will be coming over for dinner. A preview for the following issue by writer Jed MacKay and artist Marcelo Ferreira shows the arrival of Clea’s mother, Umar the Unrelenting, who begins to insult Clea’s new home right off the bat, being treated to words of ice from her daughter in return.

Umar was created by Roy Thomas and Bill Everett, and first appeared in Strange Tales #150 by writer Stan Lee and artists Jack Kirby and John Buscema, just 24 issues after Clea debuted in Strange Tales #126. Like Clea, she is of the Faltine, born from Sinifer along with her twin brother, Dormammu, a main Doctor Strange villain. While Clea and Umar are shown to not have the best relationship in the preview, their dinner party seems as though it will only get worse with uninvited guests.

Clea has been waging war against the Blasphemy Cartel in Strange, a criminal group attacking magical refugees and resurrecting dead superhumans like Thunderstrike aka Eric Masterson. In Strange #3, the Cartel’s leader, Director None, orders his soldiers to create “a smoking crater on Bleeker Street,” where the Sanctum Sanctorum is located. The Cartel’s soldiers are seen assembling outside the Sanctorum while Clea entertains her mother, but they will not be the only threat she faces in the upcoming issue.

RELATED: Doctor Strange’s Wife, Clea, May Be More Powerful Than Her Husband

Strange #4 will also feature the return of Moon Knight’s dangerous brother, Randall Spector aka Shadow Night. First appearing in Hulk! #17 and created by Doug Moench and Mike Zeck, the character has been dead since he was killed by Moon Knight in 2010’s Shadowland: Moon Knight #3, but he will be the latest to be resurrected and take on Clea. The Sorcerer Supreme is currently trying to bring Doctor Strange back to life, and she will get her wish after fighting Shadow Knight when the Cartel reanimates her dead husband in the following Strange #5, according to the issue’s solicitation.

Strange #4 is written by MacKay with pencils by Ferreira, inks by Roberto Poggi, colors by Java Tartaglia, letters by VC’s Cory Petit and main cover art by Lee Garbett. A variant cover for the issue is created by Logan Lubera and Rachelle Rosenberg. The issue goes on sale July 27 from Marvel.