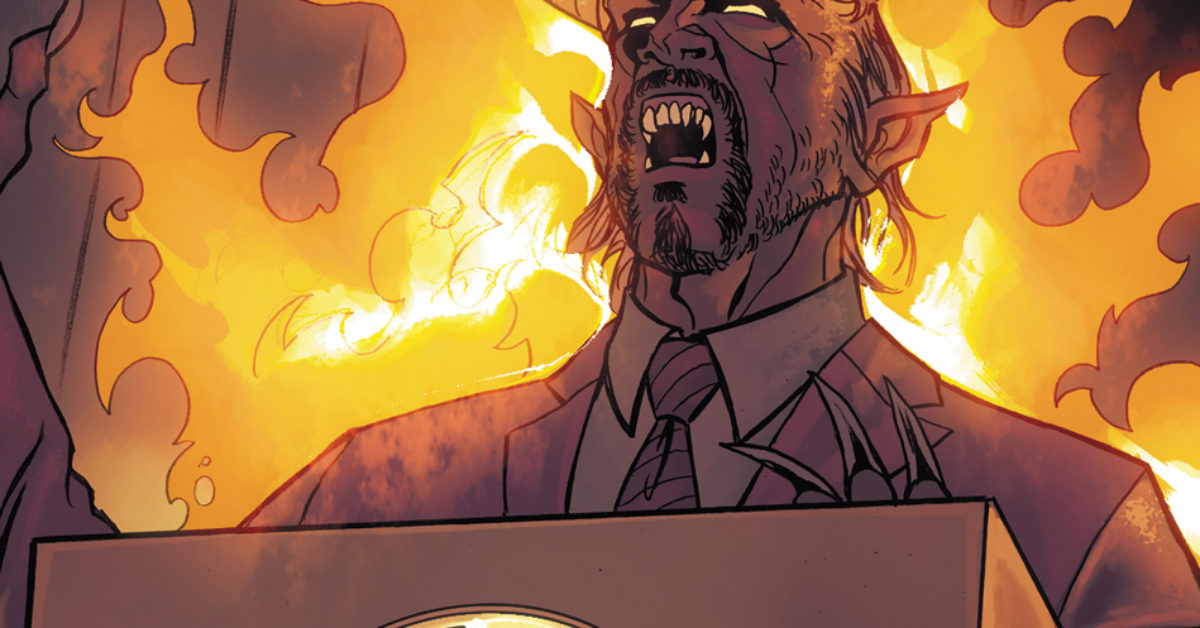 Last month, Mark Millar‘s new series Night Club with Juanan Ramírez which he had been promoting for almost one whole year, was published by Netflix and Image Comics. A vampire comic in which “a group of unsuspecting 17-year-olds is bitten by a vampire and suddenly imbued with superheroic powers.. The story unfolds as it asks: Now what? Do you live in the shadows and drink human blood? Or do you use your newfound abilities to become the costumed vigilante you’ve always dreamed of instead? You’re bulletproof, you can crawl up walls, and you can turn to mist, bats, or even a wolf. Why not have a little fun?”

At the time, Bleeding Cool had just looked at a new series called Unforgiven by Tim Seeley and Sid Kotian for 2023, in an attempt to make Vampires happen at Marvel Comics again, with The Forgiven, as a team of unlikely vampiric super heroes. “Who can resist the call of the blood? A group of vigilante vampires have decided to fight crime — while at the same time, wage a desperate war within themselves to reject their own bloodthirsty natures!” We pointed out that Mark Millar has been here before with Marvel over the clash between his Ultimate Avengers comics and Marvel’s X-Men decades ago, both with Blade in the middle of vampires vs mutants, saying “I’m writing issue five of six and they’re really, really good. How the Hell did this happen? It wouldn’t have been as big a deal if I hadn’t started the series yet, but it’s almost done and just going to look foolish following an X-Men event. Am honestly just so disgusted with this as I’ve talked about it many times. Thoughts on what I should do next?… How the Hell did this happen when they have weekly meetings about what’s coming up across the line?”

Well, it seems that collectors trying to speculate on issue of the new Night Club series have hit a different snag. Another comic book called Night Club that Image Comics published back in 2005 by Mike Baron and Mike Norton, and later with Karim Whalen and Robbi Rodriguez. With an issue coming out twice a year, the indicia states that Night Club is copyright and trademarked by Mike Baron and Mike Norton. The new Night Club has Netflix making the claim of trademarks.

So it seems that collectors have been getting the wrong Night Club on eBay, though those expecting the Mark Millar version have been pleasantly surprised by the Mike Norton version that they got. Here are the covers for the former Night Club and the solicitations for both. And yes, both being published by Image Comics does make this more amusing and weird.

NIGHT CLUB #1 (OF 4)
IMAGE COMICS
FEB051574
(W) Mike Baron (A) Mike Norton
“The Bar” As Boston prepares for the 4th of July, crime is out of control. An
eerie army of inhuman creatures threatens anyone who ventures away from well-lit streets. Two teen runaways escape to the only shelter they can find from the rain and danger of the streets: an old bar under the freeway. The preacher Walter knows this is no coincidence. Those who join together in its walls are the Night Club. Armed with the word of God, he draws the others to him to prepare for the apocalypse. NIGHT CLUB is (c) Mike Norton & Mike Baron, 2005. All Rights Reserved. In Shops: May 11, 2005 SRP: $2.95

NIGHT CLUB #2 (OF 4) (RES)
IMAGE COMICS
OCT051743
(W) Mike Baron (A) Mike Norton, Karim Whalen
“JUNKYARD APOCALYPSE” Annie sees the future. Walter talks with God. Jerry makes machines mutate and grow. And Jack? Nobody knows exactly what Jack does. The apocalypse begins not in heaven, but in New England. On July 2nd, in a Boston junkyard, these four makeshift heroes must defeat a battalion of lost souls to stop the devil’s reign on earth. NIGHT CLUB is and Mike Norton & Mike Baron, 2005. All Rights Reserved. In Shops: Dec 21, 2005 SRP: $2.99

NIGHT CLUB #3 (OF 4) (RES)
IMAGE COMICS
NOV051749
(W) Mike Baron (A) Robbi Rodriguez
“HELLUVA PARTY” The devil throws a party.  As the Tall Ships sail up the Charles River, Screwbarb, the Vice President, and several hundred friends crowd the bluffs to witness the Apocalypse.  The devil is nothing if not arrogant: He’s invited the Night Club to witness the demise of civilization, but the Night Club has other plans. In Shops: Apr 12, 2006 SRP: $2.99

NIGHT CLUB #4 (OF 4)
IMAGE COMICS
OCT061878
(W) Mike Baron (A) Robbi Rodriguez
This is how the world ends: not with a bang, but with a viscous shrug, like a snake sloughing off its skin. The President has been murdered. The Vice President, Satan’s pawn, has taken control. Only five frail humans stand between humanity and the Great Cleansing. MIKE BARON and ROBBI RODRIGUEZ bring you the final issue of NIGHT CLUB!
In Shops: Dec 06, 2006 SRP: $2.99

NIGHT CLUB #1 (OF 6) CVR A RAMIREZ (MR)
IMAGE COMICS
OCT220052
(W) Mark Millar (A/CA) Juanan Ramirez
THIS SERIES WILL BE $1.99. TAKE THAT, MARVEL AND DC!
You’re 17 years old and you’ve been bitten by a vampire. Do you live in the shadows and drink human blood, or do you use your newfound gifts for the dream costumed superhero life you’ve always wanted?
You’re bulletproof, you can crawl up walls, and you can turn to mist, bats, or even a wolf. Why not have a little fun?In Shops: Dec 14, 2022
SRP: $1.99

NIGHT CLUB #3 (OF 6) CVR A RAMIREZ (MR)
IMAGE COMICS
DEC220282
(W) Mark Millar (A/CA) Juanan Ramirez
It’s awesome being a vampire-as long as you wear a mask and pretend you’re a superhero like high school student Danny Garcia and his two best friends. The only trouble is when you realize there’s OTHER vampires out there too, and they’re going to murder your ass for blowing their cover. NOTE THE PRICE!In Shops: Feb 15, 2023
SRP: $1.99

NIGHT CLUB #4 (OF 6) CVR A SCALERA (MR)
IMAGE COMICS
JAN230256
(W) Mark Millar (A) Juanan Ramirez (CA) Matteo Scalera
This is already your favorite book. Do we even NEED to write this text anymore? Okay, well, discover the origin of the evil vampire Biker Gang and the truth behind the vampire who bit Danny back in issue one. What was he up to? It’s not what you think. Note: This book is half the price of less good ones!In Shops: Mar 15, 2023
SRP: $1.99

NIGHT CLUB #5 (OF 6) CVR A TEMPLESMITH (MR)
IMAGE COMICS
FEB230218
(W) Mark Millar (A) Juanan Ramirez (CA) Ben Templesmith
It’s all coming to a head as the vampire biker gang tells Danny and his friends that their superhero days are over and they have to become bloodthirsty murderers just like them. If they refuse? The bad guys are going to slaughter their families right in front of them. Note: Half the price of all the other books you’re buying!In Shops: Apr 12, 2023
SRP: $1.99

Separated At Birth used to be called Swipe File, in which we presented two or more images that resemble each other to some degree. They may be homages, parodies, ironic appropriations, coincidences, or works of the lightbox. We trusted you, the reader, to make that judgment yourself. If you are unable to do so, we ask that you please return your eyes to their maker before any further damage is done. The Swipe File didn’t judge; it was interested more in the process of creation, how work influences other work, how new work comes from old, and sometimes how the same ideas emerge simultaneously as if their time has just come. The Swipe File was named after the advertising industry habit where writers and artists collect images and lines they admire to inspire them in their work. It was swiped from the Comic Journal, which originally ran this column, and the now-defunct Swipe Of The Week website.

Karpowership to get SA environmental ruling by March 7