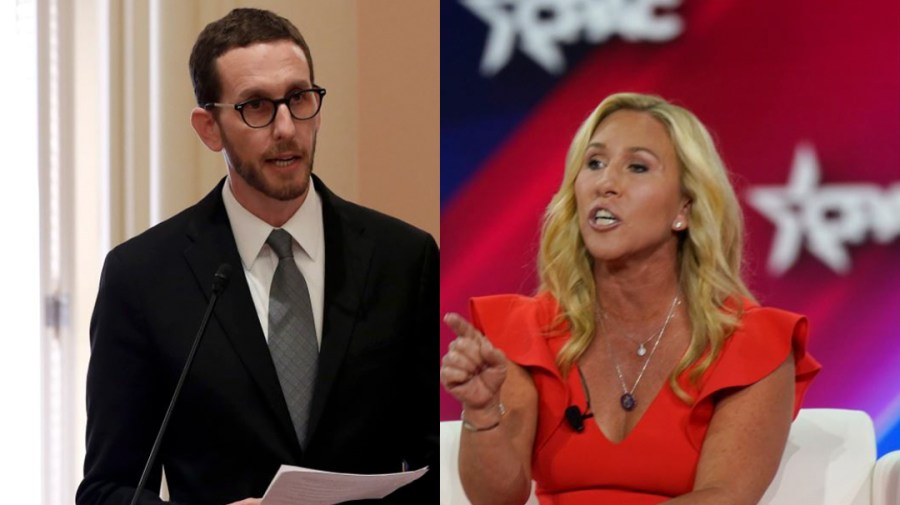 SAN FRANCISCO (KRON) – Republican Rep. Marjorie Taylor Greene (Ga.) has her sights on the City By The Bay, accusing state Sen. Scott Wiener (D-San Francisco) of being a “communist groomer” on Twitter after he criticized the use of the term as a slur generally.

“The word ‘groomer’ is categorically an anti-LGBTQ hate word,” Wiener, who is gay and represents San Francisco in the California State Senate, tweeted. “It’s super homophobic/transphobic. It plays into the slander that LGBTQ people are pedophiles. It’s no different than calling someone a fagg*t. If you call someone groomer, you’re inciting violence against LGBTQ people.”

Wiener wrote the tweet Sunday in the aftermath of the shooting at a gay nightclub in Colorado Springs that killed five and injured 18.

Some conservatives have taken to using the term groomer — which refers to adults who build relationships with children so they can abuse them — for LGBTQ people generally and gay men in particular, trading on an old stereotype that LGBTQ people are more likely to molest children (which studies over the years have shown is not true, according to the Southern Poverty Law Center).

KRON ON is streaming live

The shooting happened on the night the club advertised a drag show, and some conservatives have increasingly tied the homophobic accusation to drag performers and transgender people, as KRON4 previously reported, particularly since the debate on the Florida Parental Rights in Education Act (disparaged by critics as the “Don’t Say Gay” law) earlier this year.

Marjorie Taylor Greene, who has been criticized even within her own party for antisemitic and anti-Catholic remarks, quote-tweeted Wiener on Tuesday, stating: “Pass my Protect Children’s Innocence Act to stop communist groomers like this from using state government power to take children away from their parents to allow a for-profit medical industry to chop off these confused children’s genitals before they are even old enough to vote.”

The Protect Children’s Innocence Act would make it a federal felony, punishable by up to 25 years in prison, for doctors to prescribe puberty blockers or testosterones therapy to minors, for “the purpose of changing the body of an individual to correspond to a sex that differs from their biological sex,” according to the Georgia congresswoman’s office. It also “prohibits all taxpayer-funded gender-affirming care,” her office states.

Democratic State Assemblyman Matt Haney (San Francisco) chimed in, tweeting that Wiener “is the target of some of the most vicious, hateful & violent homophobic attacks,” and thanking him for “calling out homophobia & hate.”

Wiener indeed has been subject to death threats in addition to remarks disparaging his sexual orientation and religious beliefs (the state senator is Jewish). Just in September, a man was found guilty for threatening to kill Wiener and back in June his Castro neighborhood home was searched by bomb-sniffing dogs.

A Supernatural Comedy With Teeth