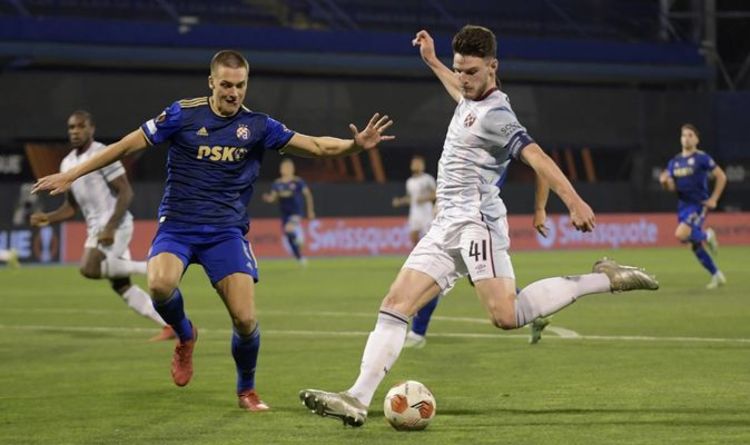 Manchester United will become very familiar with West Ham over the coming week, but the club already knows plenty about the Hammers’ biggest star. United travel to east London to face West Ham in the Premier League on Sunday before another game against David Moyes’ side at Old Trafford in the Carabao Cup on Wednesday.

Supporters might grow tired of seeing the same opposition back-to-back for United, although the matches will give them a good excuse to watch a player many of them want to see in their team in the near future: Declan Rice.

United signed Cristiano Ronaldo, Jadon Sancho and Raphael Varane in the summer transfer window, but another position remains without a marquee signing.

Holding midfielder has been a position many fans believe needs strengthening for some time now.

Ole Gunnar Solskjaer currently has Fred, Nemanja Matic and Scott McTominay to choose from, while Paul Pogba can also drop deeper to fill in, if needed.

The belief of the majority is that those players are not enough for a side of United’s calibre and ambition – and that the next big-money signing at Old Trafford needs to come in midfield.

Rice is understandably keen to rectify that widely-held view and he went some way to doing so in West Ham’s Europa League game on Thursday night.

The Hammers were 1-0 up against Dinamo Zagreb in Croatia thanks to Michail Antonio’s first-half goal when their captain took his opportunity to show what he can do.

He intercepted a pass on the halfway line, surged forward while shrugging off a challenge before smashing a powerful finish from the goalkeeper’s legs to make it 2-0.

It was just his sixth goal in 150 appearances for West Ham, but showed he has the engine, ambition and technique to add goals to his game.

That box-to-box potential is something United could really deal with at the moment – and is something Rice is focusing on.

“It’s a part of my game I’ve been speaking about for so long,” he told BT Sport after the 2-0 win in the Croatian capital.

“It was a quick-thinking, instinctive process, because Michail pulled away and I was going to pass, but I thought if you don’t shoot you don’t score. So I shot and luckily it went in the back of the net.”

United will hope Rice has two quiet games against them over the coming week, but they will certainly have been excited by what they saw from their transfer target on Thursday.

Michael Whitehall net worth 2021: How much is Jack Whitehall’s father worth?