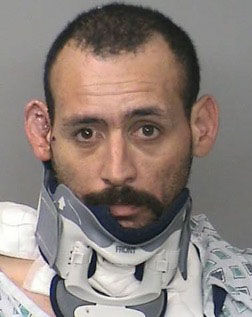 A Kern County jury convicted a man of second-degree murder and a number of other charges related to a DUI homicide case, according to a Kern County DA’s office news release.

On Wednesday, Steve Flores Garza was found guilty of two counts of second-degree murder, two counts of gross vehicular manslaughter with intoxication and two counts related to driving under the influence and causing injury.

The jury also found true additional enhancements alleging prior DUI convictions, infliction of great bodily injury and causing injury or death to multiple victims, according to the release.

As Ocampo-Carrillo activated his left turn signal and attempted to turn onto Burbank Street, Garza crashed into the driver’s side of Ocampo Carrillo’s Honda from behind while Ocampo-Carrillo was executing the left turn, according to the release. Witnesses heard a loud acceleration sound from Garza’s vehicle immediately before the collision occurred, which was confirmed by collision investigators, as was the fact that Garza never attempted to apply his brakes.

Garza had previously been convicted of driving while under the influence of alcohol on five separate occasions, and he was on probation for a DUI conviction at the time of this collision, from 2002, 2006, 2009, 2012 and 2017.He was driving on a suspended license at the time of the crash.

Steve Garza is not the first in his family to suffer murder convictions for driving under the influence causing death. On January 17, 2011, Albert Flores Garza, Steven Flores Garza’s brother, was driving under the influence and ran a stop sign at the intersection of Riverside Street and Highway 43. The resulting collision caused the death of and 19-year-old Manuel Cantu, as well as Hans Marlette, a father of three young children, the release noted.

Albert Flores Garza was convicted of two counts of second-degree murder and DUI related charges after a Kern County Jury trial in 2012 and sentenced to 31 years to life in prison.

Steve Flores Garza’s collision in 2018 occurred only 1 mile away from the collision scene caused by Albert Garza in 2011, the release added.

A sentencing date for Steve Garza is set for July 20 in front of Judge Gloria Cannon. Garza faces a sentence of up to 35 years to life.