Mahindra XUV400 EV; Key details out in a video before the official launch 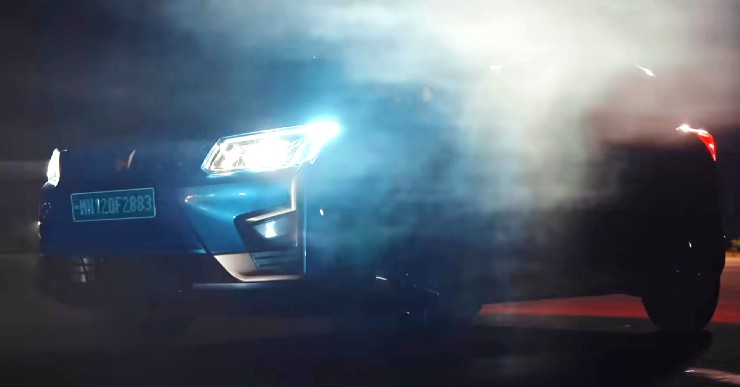 Mahindra is having quite a year. After launching the much-hyped Scorpio-N and enjoying runaway success with it, the Indian UV major continued the success streak by relaunching the older version of the Scorpio as Scorpio Classic. Now, Mahindra wants to venture on a new path by launching the XUV400, its first indigenously developed passenger electric vehicle. Mahindra has released a teaser video of the new XUV400, which has revealed crucial details of the upcoming EV.

The visual starts with a preview of the front look of the Mahindra XUV400, which features a closed grille with X-themed inserts across its width. This closed grille also gets the new twin-peaks logo of Mahindra in the middle. The headlamps look the same as they are in the XUV300, with inverted L-shaped daytime running LEDs on their outer edges. However, these daytime running LEDs do not flow down towards the front bumper edges, like in the XUV300.

Also read: Mahindra Thar and Scorpio in a classic tug of war video

The front bumper of the Mahindra XUV400 gets silver-finished L-shaped inserts placed below the headlamps and another L-shaped insert below the LED fog lamps placed in the lower corners. The visual also shows the Mahindra XUV400 in a new shade of blue, which is currently not available in the XUV300. This blue shade is seen complimented as a part of the new dual-tone shade, with silver as the secondary colour on the roof of the SUV.

Based on the current-generation XUV300, which itself is derived from the Ssangyong Tivoli, the new Mahindra XUV400 is longer and surpasses the sub-four metre mark. The front and rear fenders here get prominent squared character lines over the wheel arches, with the rear fenders being more prominent in their appeal compared to those in the XUV300.

Other highlights of the side profile of the Mahindra XUV400 include diamond-cut alloy wheels, gloss black finish for the outside rearview mirrors, chrome strip at the bottom of the door panels and roof rails. While the rear profile of the Mahindra XUV400 is not visible in the teaser video, a small glimpse of the side profile shows that it might be getting a clear lens effect for the revised LED tail lamps.

While there are not many details available about the powertrain of the Mahindra XUV400 at the moment, the new electric SUV from Mahindra will be a front-wheel drive vehicle. The electric motor is expected to be a 150 PS unit, while the SUV is likely to be offered with a battery pack with a segment-best range.